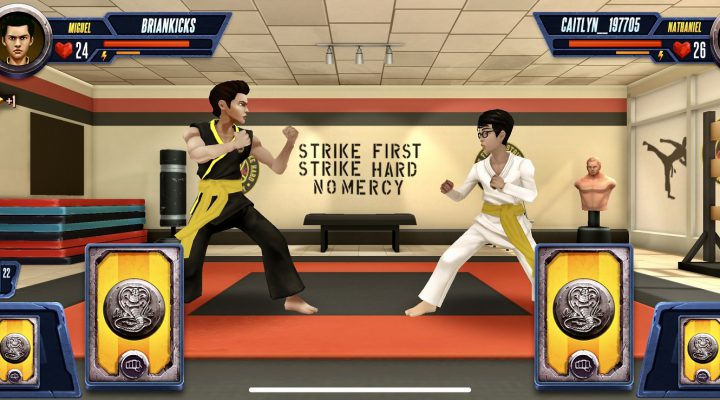 Sometimes it's hard to find a fight

Cobra Kai the television show is about the follies of obsession, coming to terms with the anger of youth and learning to cope with the fact that the past is past. It also features a lot of kicking and punching. Obviously the other parts are pretty hard to capture in a game, so Cobra Kai: Card Fighter (download from the App Store or Play Store) focuses on the kicking and punching.

It turns karate into a tactical, turn-based card game. You pick a card, your opponent picks a card, and then that phase of the scrap plays out. There’s a rock-paper-scissors style flow to the experience. Kicks beat punches, punches beat throws, throws beat kicks.

You’re not just picking your attacks though. You’ve got other cards in your deck – called wildcards – that can shift the direction of a fight. They make your attacks stronger, give you a health boost, or let you increase your energy for the next round.

You’ll need that energy too. Every card you play costs some, and while it regenerates every round, if you’re only focusing on using your most powerful moves you’re going to end up without enough to spend.

It makes for some pretty engaging scraps as you try and balance out your offensive capabilities with energy conservation and trying to get the upper hand. Different characters have different wildcards, as well as different combinations. Play a character’s preferred combo – say kick, punch, kick – and the last attack will get double the power.

Playing three cards of the same color will give you a boost as well. Fights in Cobra Kai: Card Fighter are never dull or formulaic – you’re going to need to think carefully about your strategy, and build a deck that complements your strengths. Basically, there’s a lot to think about here.

There’s some soft base-building, swipey tappy mini-games and a story to follow as well. Everything is put together with a squeaky clean level of polish, and when you finish a fight it’s almost impossible not to jump back in and have another one.

Is it as good as the TV show? Well, that all depends on why you enjoy the TV show. If you were hoping it’d capture the existential torment and the pointlessness of cycles of violence, then you’re going to be disappointed. But the punching and kicking? Yeah, it pretty much nails that.