Video games are fun, theme parks are fun – but a video game about theme parks?  That’s setting the fun bar crazily high.  Yet while lots of developers have tried this combination over the years, only a handful of series – like Roller Coaster Tycoon – ever managed to be any good.  Park management sims tend to offer about as much excitement as waiting in line on a hot summer’s day.  Can Zynga’s latest foray into the genre buck this trend?

Yes, but it does so because it feels more like a Zynga game than it does a theme park sim.

As you’d expect from a game named CoasterVille, players are tasked with building the theme park of their dreams.  You’ll start out with nothing but a plot of land, and before you know it you’ll have roller coasters, bumper cars, Viking swings, and more.  You’ll also have a bevy of park visitors to ride these rides, shop in your shops, and chow down on your food.  Making sure that everyone has a good time is your primary concern.  So how do you do that?  With Zynga-style simplicity, of course!

Despite all of the carousels and corn dogs, CoasterVille has little in common with the deep, strategy-heavy theme park sims of the past.  You won’t need to invest much thought in the running of your park, and almost everything you’ll do is accomplished with a single click and a lot of hand-holding from the game’s quest system.  That said, there’s a level of strategy here that’s somewhat higher than you might expect, even if it’s not readily apparent.  For example, visitors are more likely to buy food at a shop that’s near a ride you’ve just “boosted” (CoasterVille‘s code for breaking safety regulations and revving it up awesomely fast), because they’ll likely lose their lunch and want to top their tummies back up right after.

Placing shops, restaurants and rides with consideration to elements like this is about as deep as the gameplay ever gets in CoasterVille, but it gives you plenty of reason to fiddle around with your park – which can be just as much fun as anything else.  Collecting from shops and boosting rides costs energy (yes, Zynga’s gone back to their old school energy system for this one), but when you run out, you’ll be just as content to switch into build mode to move things around and see how your park can improve.

A lot of the fun in these improvements comes from the game’s system of upgrades and customization.  Every attraction can be upgraded to improve its popularity and potential, and these upgrades often come with a visual makeover.  Growing your merry-go-round from a quaint kiddy ride to a two-story extravaganza is a deeply satisfying experience; not just because you upgraded a ride, but because you upgraded your ride in your park.  The level of customization and range of purchasable rides really lends to a sense of ownership. 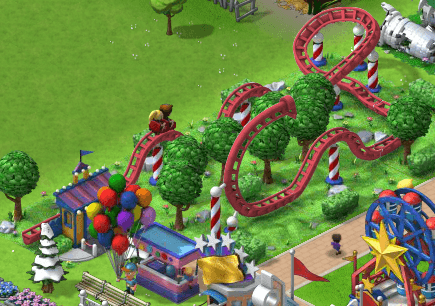 If you’re really into customization, though, you’ll want to take a course in Coaster Design 101.  Rather than plunking down a pre-built ride when constructing a roller coaster, you’ll build it out piece by piece, and every section of the track is customizable.  Players are given a few different options to choose from depending on if it’s a curved piece, straight piece, or an end-and each will cost you, either in regular or premium currency-but the options are there to make sure that your dragon coaster will look nothing like your neighbours.

CoasterVille also wins high marks for its presentation.  A rich color palette, variety of themes, and always-animated rides and park visitors make your park feel like a living, breathing place.

Bringing a Zynga-style simplicity to the theme park genre seems to be a great fit-but if you’re averse to the usual trappings of social games, CoasterVille isn’t going to do much to win you over.  You’ll be spending a lot of your time collecting items to finish quests, visiting friends parks, and running out of energy after only a couple of minutes.  Facebook has seen a lot of rich, deep, and involved games this year, and CoasterVille isn’t one of them.  This is classic Zynga, through and through, and that’s something you’re either going to love or hate.

If you’re already a fan of Zynga’s family of Ville games, CoasterVille should make a fantastic addition to your daily play list.  With a fun presentation, plenty of variety, and a seemingly never-ending quest system to act as your carrot on a stick, CoasterVille takes the appeal of more complex theme park sims and boils it down to a fun 5-minute clickathon.