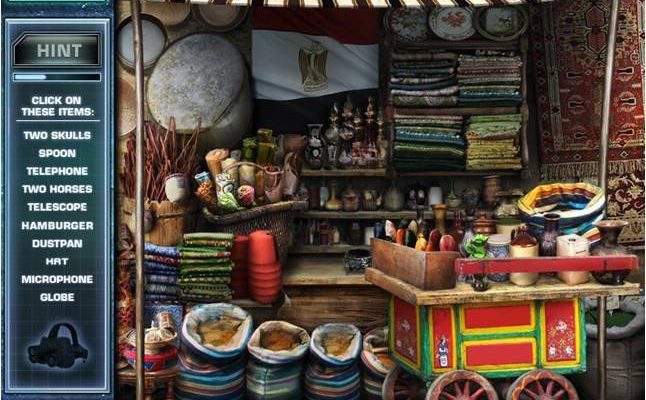 In CLUE: Secrets & Spies, fun is the hardest object to find.

Oh, for the simpler days of murder mysteries in sinister mansions. For anyone who grew up playing the original Clue, Clue: Secrets & Spies has nothing in common with the board game. Well… ok, players have to track down enemy agents who bear names like “Mustard”, “Green”, and “White”, but that’s about it. Instead, the game feels a bit more like something out of the Carmen Sandiego series, though it isn’t nearly as much fun as those often are.

This is a pretty standard hidden object game, presented as a series of episodes that have a one-hour time limit to beat. In each episode, players travel around the world to different cities as they search for clues that will lead them to these hostile spies. Each city has one screen cluttered with a variety of objects, and it’s up to the players to find the correct items in order to uncover a clue. Occasionally, things get shaken up with a night level (which only allows a small section of the screen to be seen at a time) or a spot-the-difference screen, but those only happen once an episode. 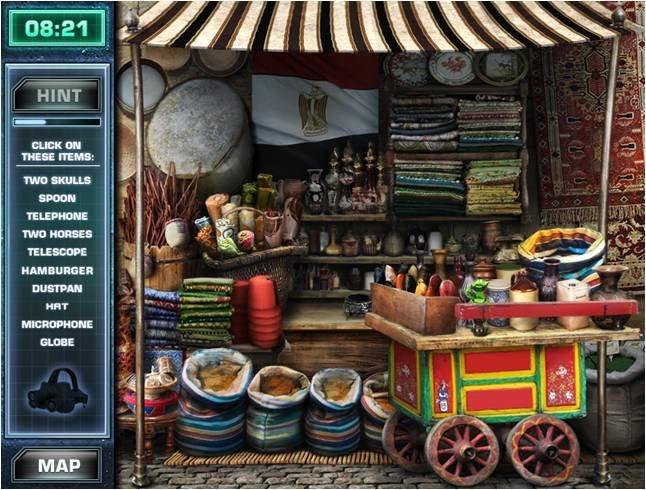 Admittedly, these screens are nice to look at. The backgrounds that appear are lovely, and the objects themselves are certainly nicely designed and cleverly hidden (though, sometimes, they’re a bit too well hidden at times… more on that later). Unfortunately, the same locations and backgrounds are used in the game’s various episodes, so things start to feel a bit repetitive after a while. The other problem is that, even though the iPad provides a lot of screen space to look at, it’s hard to make out many of the details on display and there’s no ability to zoom in or out.

The lack of a zoom is problematic because some of the objects are barely visible on the screen, even when the iPad’s brightness is cranked all the way up. At times, some of the objects don’t even appear like they should, having often been re-colored or faded into unrecoginzability. Thankfully, the game features a clue button that recharges over roughly a minute, which brings up a kind of reticule that features a progress bar which fills as it moves closer to one of the level’s hidden objects.

Perhaps the biggest problem with the game is that it seems incapable of telling players what they need to find. Each screen has a list of items to find, but the descriptors aren’t always terribly helpful. In one level, the “boat” listed turned out to be an abstract one made from a newspaper. In two subsequent areas, the item lists included “croissant” and “breakfast roll” but both required players to find the exact same type of object. While this might just be a little irksome from time to time, it’s maddening after a few episodes because of how regularly it happens. 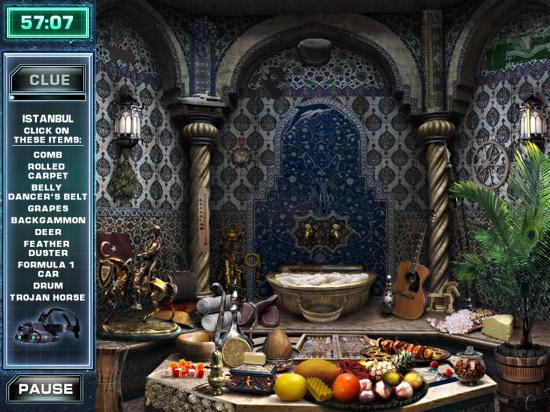 The game’s developers were clearly aware of this issue. Under the How To Play screen, the following advice is presented: “the names of objects can be misleading. If it says ‘Bow’ you might need to find the weapon, a piece of ribbon, or a violin bow, so don’t assume which one it is.” For the record, there was one level that specifically listed a violin bow as an object to find.

Clue: Secrets & Spies has a reasonable amount of stuff going for it, but it’s inconsistent in the final execution. It’s not bad, but it isn’t as fun as it should be, and it stops being interesting if it’s played for more than a few episodes in one sitting.