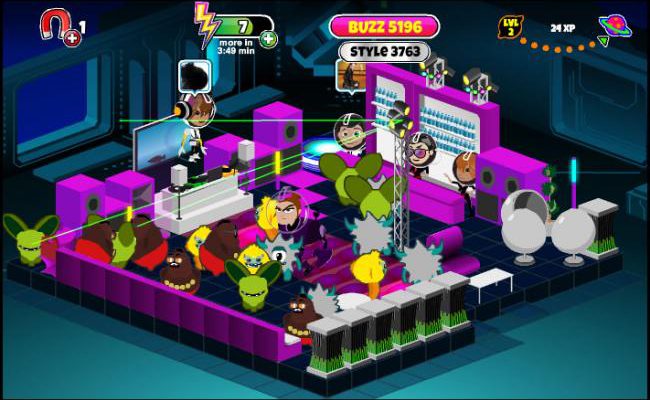 Take the party to outer space

Let’s face it, everyone once in a while, we all enjoy a good party. And a game by the name of Clubbox is bringing the party to Facebook … and then launching it into outer space. Following the same thread as games like Nightclub City, the app is all about making the biggest and wildest alien nightclub in the galaxy. Unfortunately the result is a bit uneven, as for every great mechanic it adds, there is something else that just feels average.

In the future all clubs and parties have been banned by the world government of Earth and everyone is subject to droning work. So naturally we all set off to space to party with some strange alien critters. Clubbox works much like similar club management games, tasking you to manage the primary entertainment elements of dance, drink, and music. So long as these are present, guests will enjoy themselves and the “buzz” of the club will increase, which in turn, increases revenue. 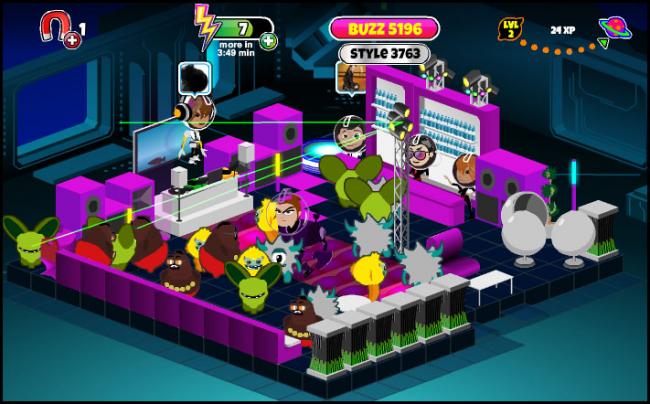 Guests are really the key difference between Clubbox and other similar games as they come in a variety of alien creatures. Though such an aesthetic isn’t going to appeal to everyone it does change up the visuals quite a bit from the standard. Moreover, as you level up, new species are unlocked that grant special perks, like the ability to expand your club or perform special effects that garner experience and the occasional cash reward.

Expanding the club is actually worth highlighting further as it is done tile by tile using a virtual item called “Magnets.” Though this can be purchased for real money, it can also be earned through the game’s several social elements. Unlike other social games that have you visiting friends for a marginal currency rewards daily, Clubbox allows you to visit them (or other random users) and interact with their club; buying drinks, dancing, etc. Doing so will earn rewards that are actually useful, such as the noted magnets.

Along with the need to visit other players’ virtual spaces, you can also do more common things such as hire friends as bouncers or bartenders. Expectantly, there are plenty of opportunities to post achievements to your Facebook Wall, one of which is the music your club is currently featuring.

This is actually one of the major highlights of Clubbox as it plays greatly into the creative aspect of the game. Powered by YouTube, you can actually search and add videos to your playlist and play them in your club. This adds a significant personal flair to the game and as you purchase speakers to place around the space, the list will play for longer. Unfortunately, the dancing aliens often look a bit awkward as nothing ever appears in sync with the rhythm. 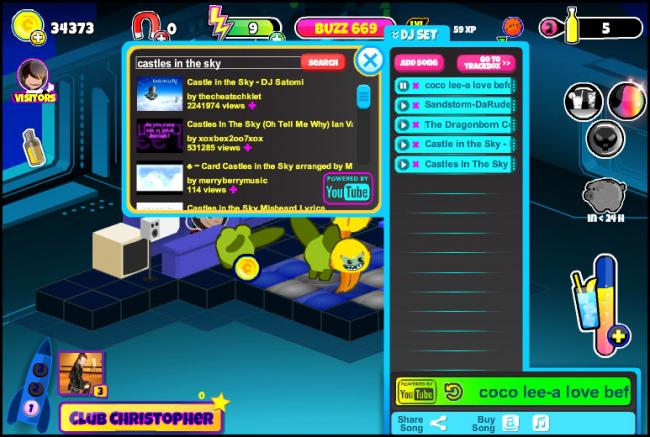 While on the thread of customization, another nice perk is that you can actually change the color of many of the game’s items before you buy and place them. It’s a good addition, but a bit flawed in its application, for there is no way to change colors after an item has been placed. Often is the case where items need be purchased more than once because of this.

Another good perk is that as you perform various quests and actions in the game, you will occasionally come across “Golden Drinks” that are used to unlock new alcoholic beverages in the bars. It’s another nice perk, but the alcohol portion of the game comes with its own annoyances. Namely, green critters that you get as visitors early in the game that literally do nothing but throw up. Seriously, it’s like every 10 seconds and it constantly lowers the buzz rating of the club.

Overall though, the positives do outweigh the negatives in Clubbox. In a heavily saturated business simulation genre, it does a good job at trying to stand out. It does need a little bit of polish here and there, but between the customizable music and color schemes it does a lot to tailor to your personal style.