By John Anthony | 8 years ago 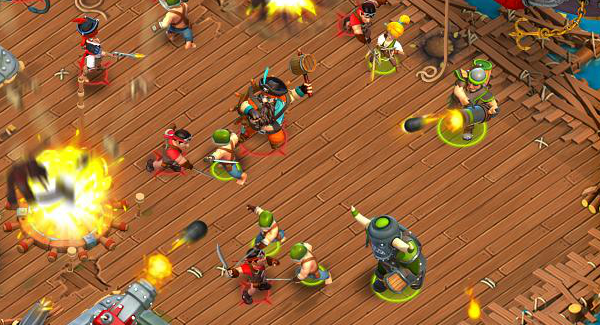 Game Insight’s Cloud Raiders: Sky Conquest is a Clash of Clans-style combat sim that takes place in the breezy world of islands floating in the sky. It feeds you a handful of diamonds then sets you free to transform your tiny village into a well-defended stronghold that can fight off pirates as well as attack other sky villages. Oh, and did we mention this takes place on floating islands?!

Your hunk of rock in the sky is where most of the action in Cloud Raiders will take place. Here you’ll place buildings, train troops, manage your resources and get everything spruced up to defend against an attack. It’s both a home base as well as a loot generation stronghold, so the more time you spend working on the layout and fortifications the better.

There are four main types of buildings to use in Cloud Raiders: defensive, army-based, resource-based and decorative. Defensive includes things like walls, explosive traps and cannons to blast away pirates that land on your island. The army buildings are where you’ll set up troop camps and training grounds to beef up your soldiers and house them until they’re needed. Keep everything as full as possible or you’ll find yourself in the middle of a battle with no one to send into the field!

Resources are another area of focus in Cloud Raiders. Gold coins and cloud nectar, used for upgrading just about everything from buildings to troop types, can be mined from the ground and sky then stored for later use. Diamonds are the game’s “hurry up” currency and can be spent to kill the waiting period for training and building things.

While its currencies and in-app purchases may sound very ordinary, Cloud Raiders does some great things with its mix of offensive and defensive gameplay. Battles work as one would expect, showcasing each village and allowing you to select and drop troops outside the perimeter. Soldiers choose their own targets and battle automatically; you just sit and watch (and hope you brought enough oomph to get the job done). Pirates sometimes sail to your island ready to raid your village. When you’ve placed enough cannons and have defensive troops ready you can open the flood gates and let them through, hopefully slaughtering them before they do too much damage. This earns you some loot and teaches you to defend against player attacks. 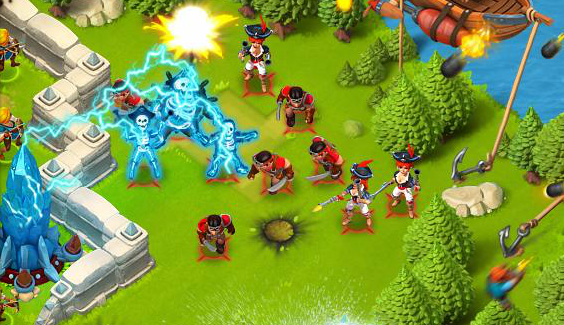 There are a few visual drawbacks to Cloud Raiders, though they’re minor in the scheme of things. Some of the animations are completely silent, as if someone forgot to include a handful of sound effects in the shipped version of the game. This is coupled with some surprisingly tiny interface icons that are difficult to use on anything smaller than a tablet. Perfectly playable, but they’re definitely marks against the otherwise smooth game.

Cloud Raiders: Sky Conquest does something a little different with the combat simulation genre. The core is still easy to recognize and get into, so you won’t feel lost even when pirates are beating down your supposedly well-fortified exterior walls.