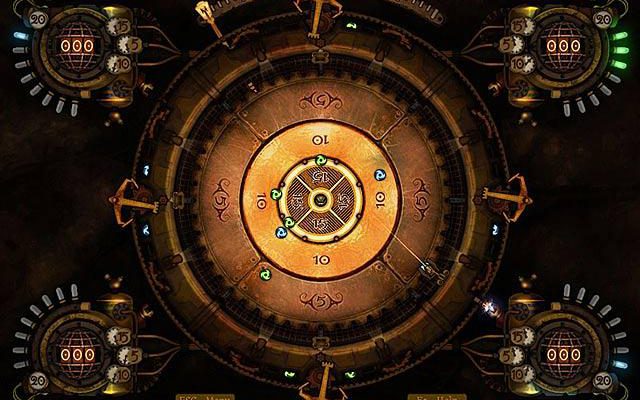 Steampunk aesthetic aside, this is classic Crokinole through and through

I have a laundry list of things I plan on doing as soon as my wife and I get out of our condo and into a proper house. Get a dog, think about having a kid, buy a pinball machine, have more parties, etc. In addition to those, one of the things high on my list is the acquisition of a nice Crokinole board. I’d wager most of my friends don’t even know what crokinole is, and they run a few hundred bucks, but man do I want one. Until then I have to make do with digital versions, like Clockwork Crokinole.

Crokinole is a tabletop game played on a huge circular wooden disc. The board is separated into a few concentric rings (worth 15, 10 & 5 points the further out you get) with a deep trough around the outside. The only thing to break up the flat surface is a small hole in the very center and a few round pegs surrounding the inner circle. 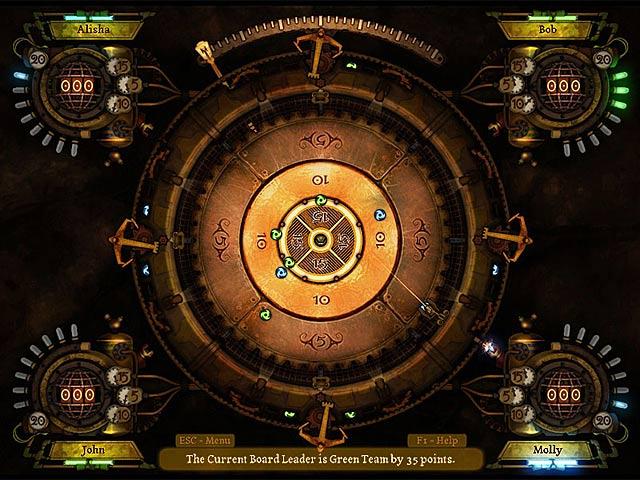 Players take turns flicking discs from the edge of the table, trying to get as close as possible to the center. If there are no opponent discs on the board then you need to at least get your disc to the inner ring. If you don’t then the piece is removed for the round. If your opponent has at least one disc on the table then on your shot you MUST bump their piece. You can tap it or try to bang it off the table, but if you don’t hit it it’s a foul. The strategy of the game lies in giving your opponent tough/impossible shots by hiding your pieces on the table as best you can.

Players alternate until out of discs and then the score is tallied. Any pieces landing in the center hole get 20 points and then the final resting spot of the others are their values. So just cause a disc stops in the 15 space doesn’t meant that’s what it’ll be worth by the time the pieces are all banged around.

In Clockwork Crokinole the aiming/power of your shot is handled sort of similar to how most golf video games have done it for years. You’ll pick where you want to start your shot and the direction it will take. Then you’ll hold down the mouse while a meter fills up for power letting go when you get as strong as you want. There’s an arrow that then travels back down the meter towards the beginning and you click again when instructed. Too early or late and shot is off target. It’s pretty standard and works well. 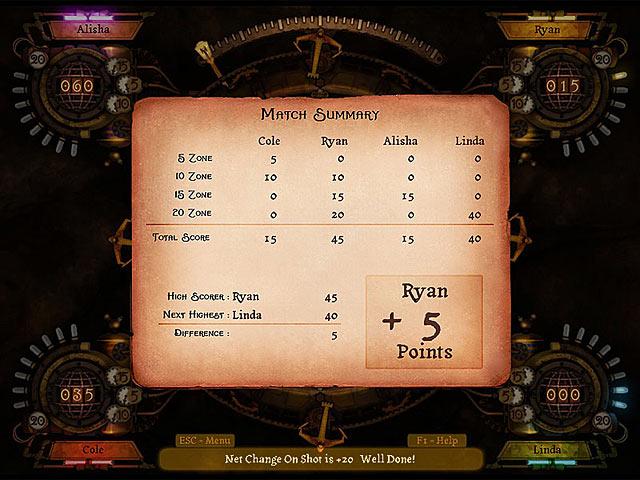 The “clockwork” part of Clockwork Crokinole refers to the visual style of the game, and isn’t indicative of any gameplay element. Rather, the entire game has been saturated with that steampunk aesthetic. Everything is brass and metal, magnifying lenses and steam. It’s that look that screams “it’s old yet somehow strangely out of time.” It looks nice enough as the steam jets and sparks fly as pieces move and slide around is a nice touch.

But after a while the animations of the launcher moving back and forth and the associated sounds settle into pretty discernible patterns, and quickly get old. After hearing the spark sound every single time something happens, it loses its charm. The occasional spark would have been unique and qwirky, indicative of the steampunk aesthetic. When it happens every single time like, well… clockwork, that just means the machinery isn’t put together very well. What I’m trying to say is it got old fast.

Luckily that vibe didn’t intrude on gameplay in anyway. There’s no electrified parts of the table or moving areas or anything like that. Once you get past the menus and the “look,” it’s just pure crokinole, which is perfectly fine with me.

Clockwork Crokinole isn’t going to set the world on fire. It doesn’t offer any long-term tournament game modes or anything online against other players. As such playing the AI in single matches only holds so much interest. Still, we don’t get many crokinole game around these parts, and this one does a pretty good job if you’re looking for a fix.