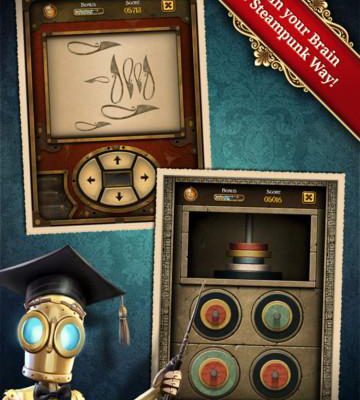 Brain teasing games are a difficult thing to balance sometimes when it comes to their appeal. Make them too hard and the player feels like an idiot. But if they’re too easy, then there’s just no point in playing. That considered, developer Total Eclipse has done an outstanding job with its new iOS release Clockwork Brain. Steering away from slippery slopes such as trivia, the game works more like an IQ test in that it tests functions of the brain such as analytical capabilities, special recognition, logic, and memory.

Every time players engage in a game of Clockwork Brain four of several mini-games will be selected at random. Each one tests a different aspect of thinking and will focus on concepts ranging from shape recognition to word puzzles. For each one a limited amount of time is provided, thus players must try to solve as many puzzles as possible. For each correct question points are earned, with bonuses for expedient answers. As such, the general idea is to earn as high a score as possible between all four games cumulatively. Answers must be chosen wisely though, as incorrect ones will usually result in point deductions. 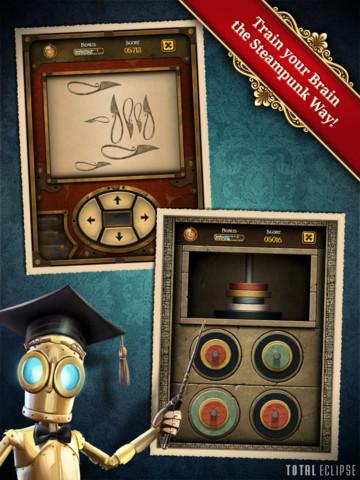 Thankfully it’s not too hard to get a hang of. Regardless of game, the challenge consists of tapping correct contextual buttons that are associated with an image or set of images. Free-to-play, the app comes with four unique challenges right from the start that consists of Scrolling Silhouettes, Missing Tiles, Anagrams, and Chase the Numbers. In the first, players are given a colored image of some random object and must identify its shape on a moving conveyor belt of other shadows. Missing Tiles consists of a grid that is missing blocks and requires players to figure out the number absent. Anagrams is a fun little word game that challenges the brain to pick which set of scrambled letters forms a presented word. And then there is Chase the Numbers, which is a short-term memory test that tasks users with recalling a sequence by tapping tiles in ascending order.

As players score points, they earn stars that correspond to their rating. As the points go higher, the difficulty increases with more shapes, missing tiles, longer and more difficult words, and extended number sequences. The better one does, the more “Sprocket Tokens” are earned, which can then be used to purchase extras in the app such as bonus mini-games, artwork, and so on.

While the games of Clockwork Brain are enjoyable, they come with a bit of a downside. Namely, the scaling of the difficulty level ramps up to an absolutely insane level. It’s not so much that the challenges get harder due to more letters or shapes, but the speed in which players must solve puzzles, within the starting time limit, seems physically impossible. Even when answering many puzzles at one per second, the maximum score earned was still an average of three out of five stars. 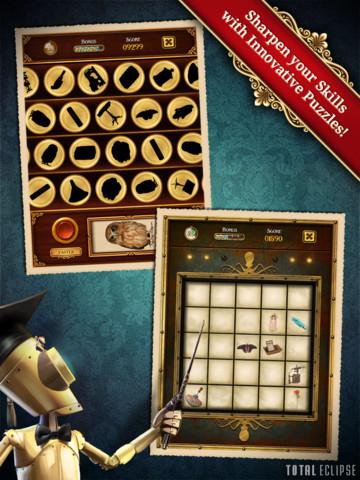 It doesn’t hinder the game play too much though, as so many questions get answered that it still feels more than gratifying to earn the average three stars. Such also makes earning four a far greater accomplishment. That said, it seems nigh impossible to reach more than that.

What adds to the experience too is that not only is Clockwork Brain polished from a presentation stand point, but it also has six other mini-games that can be unlocked via in-app purchases. A seventh is also unlocked by earning an exorbitant amount of Sprocket Tokens. Each one of these paid puzzle sets are fun as the starting four and consist of things like recognizing size and direction or shape and perspective.

Though it might be difficult to garner a maximum score in Clockwork Brain, the bulk of the application is a fantastic collection of brain teasers. Quirky and stylized, it’s gratifying to feel intelligent through the rapid solving of puzzles and no two ever feel alike. It’s also a fantastic bonus that the game, in no way, deals with trivia, leaving the challenge solely up things like reasoning and recognition. Suffice to say, Total Eclipse’s new title is certainly one worth some attention.