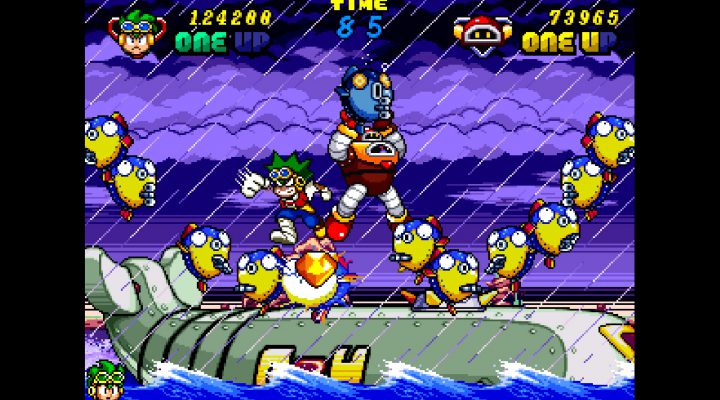 Often projects are left unfinished for a reason. However Clockwork Aquario – a game that was originally being developed for the arcades way back in the early 90s – was a bit unfortunate to be left on the shelf.

Created by the team behind the Wonder Boy and Monster World series, it was unfinished due to polygonal visuals being the ‘in’ thing at the time.

So this bright colourful 2D action platformer was thrown to the wayside – and has only now been dusted down, completed, and released into the wild.

Yet ironically it’s aged far better than the majority of 3D games from the same era, and is largely a joyous and frenetic delight.

You can play as one of three characters – a boy, girl, or robot – and have to complete very brief stages filled with a range of colourful enemies. You do this by jumping on their heads, hitting them, or simply flinging them into one another.

The latter is the game’s major mechanic – by hitting enemies once you’ll stun them, allowing you to grab a hold of them and use them as a projectile. Most stages see you fighting past a number of smaller enemies, and then taking on a larger boss.

Now that’s all there really is to the core gameplay, but it works incredibly well and feels very tactile. In a game originally meant for the arcade – a place where games are generally made to be deathtraps – the controls never feel unfair or floaty.

There’s a well implemented two player mode too. It allows you to throw your partner, but they remain invincible for a few moments after being thrown – a very important detail that helps avoid unnecessary frustration.

There are mini-games between levels where you compete with each other too, which is a frantic and well thought out addition.

The main problem with Clockwork Aquario is its length though, with most play-throughs taking just twenty minutes. There’s high score chasing to be done, and a well presented art gallery to look through – but that’s about it aside from the main campaign.

Ultimately this is a hugely fun throwback, but one that won’t have quite enough replay value to justify the asking price for most.