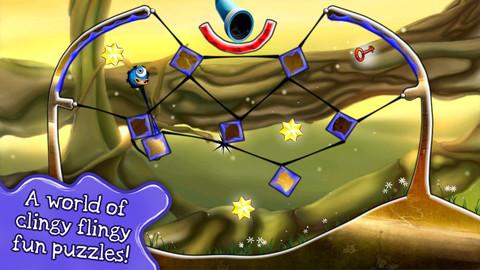 Cling Thing may be all about stickiness, but the game won’t stick with you for very long.

Cling Thing is the latest physics-puzzler game from Chillingo and Atom-Soft, and this one is all about helping a cutesy little squish creature traverse through various levels by clinging to the sticky walls around him. But even though Cling Thing features a ton of puzzling levels and deeper incentives to keep you clinging and swinging back for more, its vague denotation of “thing” in the title proves to be just as vague and bland as the actual adventure that’s contained within.

At first glance, Cling Thing seems like your typical puzzle platformer game, where players are tasked with snagging three gold stars in each stage before moving on to the exit. However, where this one differs from most casual puzzlers is that Cling Thing puts a big emphasis on completing each level as fast as you can, to earn bronze, silver, and coveted gold medal times on each and every stage. This may be off-putting to some players at first who were expecting more of a laid-back ride, but I don’t think the game would be nearly as challenging if you got to take your sweet, sticky time. Better yet, after you’ve completed and three-starred an entire world, a new option opens up for you to replay every level and snag a bonus fourth golden star. While these additional stars don’t change up the original levels too drastically, they still prove to be a nice inclusion and offer an added bit of replay value for when you blow through the game’s initial 96 short but sweet levels.

What Cling Thing really lacks, however, is a strong sense of storytelling. There is literally no attempt at a story here, other than what we know from the game’s iTunes description page: that these colorful, squishy creatures exist, that they like to cling on stuff, and that nobody knows why. That’s it, and nothing more. In each of the four initial worlds, you’ll play as a different-colored squish ball, with that same unexplained goal of swinging your way into the exit sewage pipe. Despite the nice and colorful character designs, the same unfortunately cannot be said for the level designs as well. Each environment in the game is especially bland, with dark and muddy colors that made me feel like I was playing in some dull and boring sewer that was covered in just all sorts of unidentified stickiness.

Sadly, the want for something more doesn’t just stop at the game’s presentation, but winds up sinking its way into the gameplay as well. Sometimes the parameters of the game’s physics are not always clear. For instance, it can be all too common for you to stick your creature to a faraway wall without any struggle in one level, while in the next level it becomes next to impossible to have him stick to a wall that is marginally closer. This fluctuation in space and proportions is not exactly ideal, especially when Cling Thing intends for you to seamlessly flow through each environment by latching onto one sticky surface, followed immediately by the next. 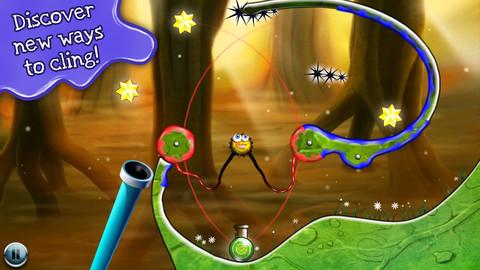 One of the more interesting gameplay mechanics is Cling Thing‘s multi-touch capabilities, which let you swing your creature or move environmental objects by taking advantage of the game’s stretching physics. It’s a cool concept in theory, but one that falls incredibly short in execution. For one thing, more often than not these multi-touch control points are spread so far apart on the actual game screen that you’ll wind up blocking almost all of the action with your hands as you stretch and contort your fingers to move your creature along. Also, if you’re like me and like to play your smartphone or tablet games lying down, it becomes incredibly hard to hold up your device while performing the multi-touch requirements, and there were several times when the shoddy multi-touch setups actually caused me to drop my iPad right on my face. Ouch!

So in the end, while Cling Thing may have a lot of heart in its quest to become the next big thing in cutesy physics-puzzling, the game is really hurting in terms of its charm. With bland, forgettable characters and boring level designs, not to mention controls and physics that do more to harm the playing experience than do it any good, this is probably one game that’s best left stuck on the back of your chair like a stale piece of gum.