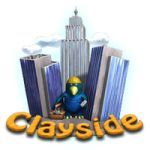 When Bejeweled appeared, players were content with swapping gems and trying to beat their personal best. Since then, developers hoping to repeat the success of Popcap’s classic have thrown in more twists and turns than a bag of pretzels. Developer Enkord is no stranger to this drill, having released their third match-three game, Clayside. Although similar to their previous efforts, Zodiac Tower and Jurassic Realm, Enkord’s latest does have a few variations all its own.

That much is evident the moment you load Clayside. Instead of a menu sitting on top of a lackluster background, your screen lights up with color and detail. As you look down at the city in which the game takes place, you can see everything appears to have been built using miniature clay models. Although there’s a computerized sheen to the whole lot, the image is playful and inviting.

When it comes to the gameplay, however, you’ll be on familiar ground. When you think of a match-three offering, a few basic rules come to mind. For example, you either drag rows and columns of objects, or swap adjacent items, until you create a match. In Clayside, you’ll do both, depending on the level.

And instead of being asked to eliminate the tiles beneath objects, you might be challenged to clear away a stack of blocks shaped like a sailboat. Since you eliminate blocks by creating matches next to them, though, familiar challenges do feel fresh.

True, you’ll eventually have to deal with such match-three staples as locked items, but that’s when the level design gets good. On one, you’ll have to break an arrangement of blocks surrounding a key, which in turn unlocks the lower half of the screen, where a group of tiles needs to be eliminated — all while trying to beat the clock.

You’ll need time on your side, especially when learning what the various powerups do. According to Enkord’s Web site, the developers included over 35, all of which can be upgraded. As you play, you’re occasionally given the opportunity to choose between two new powerups. Once you make your selection, the item will begin appearing at random; the higher its level, the greater the odds it’ll appear and the more powerful its effect. When paired with the game’s visual effects, powerups like the Lightning Bolt and the Firewall (both of which cause massive damage) are one of the highlights of playing Clayside.

The audio strikes a solid note as well. Blocks, for example, give off a satisfying crunch when you break them, making long combos fun to listen to. Even the applause you hear when you do something well comes across as genuine rather than cheesy.

Unfortunately, another feature that could’ve elevated Clayside above the norm ends up falling short. Between levels, the game’s fine-feathered protagonist upgrades his home with various amenities, including a nicer car, better landscaping and fancier outdoor furnishings. Unlike the powerups, however, you can’t choose what gets added, leaving you in the role of passive observer rather than active participant.

Another bump in the road is the lack of a help file. Since you’re given instructions as you play, this wouldn’t be a problem, except for the parts of the game screen that require some guesswork. Although I figured out two ambiguous elements off to the side were progress bars, what they track isn’t obvious from their design.

Those are minor complaints, though, when stacked against the things Clayside does well. From the visuals to the gameplay, Enkord takes the tired process of swapping and sliding items to create matches and makes it fun again. That and a bag of pretzels add up to time well spent.