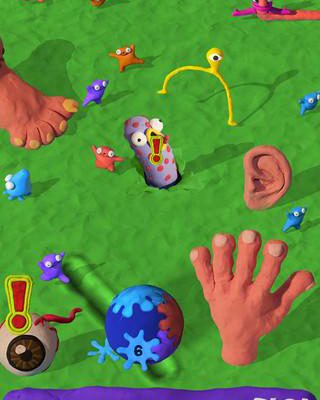 It’s a beautiful day in the clayborhood

A long time ago, in a galaxy made out of clay, a horde of Bully Beasts attacked the land and flattened all of its clay-monster inhabitants.  Now, thousands of years later, a mysterious Stranger appears and offers to return the world of Clay Jam to its former glory—as long as you feed him lots of clay to do so.  Thus begins your journey as the initially small Fat Pebble, a clay ball on a mission.

There are two goals Fat Pebble and his new godlike friend are trying to achieve: rebuild and repopulate the ransacked hills of Clay Jam—five in all—and permanently evict the Bully Beasts residing at the bottom of each hill.  In order to accomplish the former, Fat Pebble will need to collect clay by squashing and rolling up monsters (who, like everything in the world of Clay Jam, are made out of clay).  The clay he collects is used by the Stranger to bring more monsters back to life, which return to inhabiting their respective hill and then are—you guessed it—rolled up by Fat Pebble and used to conjure up more monsters.  It’s a strange yet noble circle of doughy self-sacrifice, to be sure. 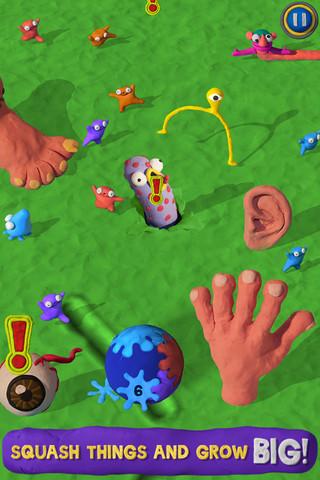 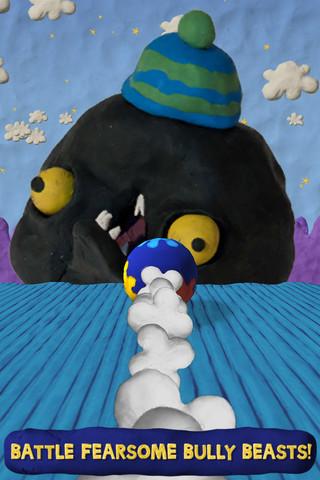 The latter goal, Bully Beast removal, is accomplished by the sheer force of Fat Pebble’s ever-growing body.  As our spherical hero rolls down each hill—growing in size by squashing his monster pals—he gets heavier and packs a greater wallop upon reaching the bottom of the hill (and the Bully Beast’s face).  A rolling ball gathers no moss, but does build tons of clay and momentum for sending Bully Beasts flying.

In order to accomplish either of these goals, you’ll need to guide Fat Pebble down the hills of Clay Jam through the use of trenches gouged (swiped) into the clay ground.  Fat Pebble will roll straight on his own or follow any path you scratch out.  Your core focus is guiding him into monsters small enough to roll up while avoiding the monsters and hill-flora (like giant slices of pizza) that are too big for his current size.  This gameplay mechanic, (not to mention Clay Jam‘s bizarrely endearing characters), is very reminiscent of the Katamari series.  Anything that is too large to pick up will have an exclamation point over its head, a warning that running into it will bounce you back and knock clay off what has currently amassed on Fat Pebble.  Anything small enough to pick up will increase Fat Pebble’s size and add clay to your collection, to be banked once you reach the end of the hill.

The larger Fat Pebble becomes, the farther he can send Bully Beasts—like aptly-named “Wonderbeard”—flying.  Each trip down the hill and into a Bully Beast will net Fat Pebble points for the distance (in meters) the beast flew, which in turn earns you “power plays” that can be used to enhance your next roll.  Power plays greatly increase your clay-collecting chances, with power-ups like “clay boost”—which automatically adds 20 clay to Fat Pebble—or “flaming Pebble”—which doubles all clay collected for a short period of time.  In a blissfully smooth cycle of gameplay, this helps you earn more clay, slap Bully Beasts farther, and earn even more power plays. 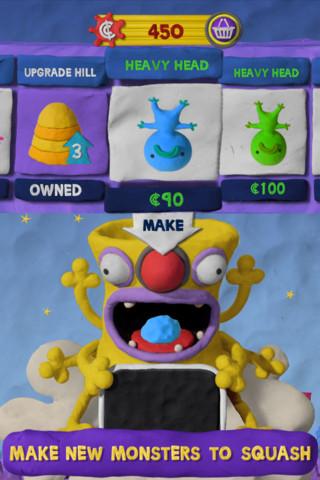 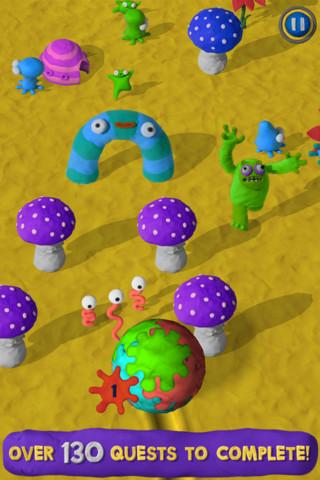 Bully Beasts aren’t that easy to evict, however.  Merely slapping them around with your giant clay head is a start, but you’ll need to complete a series of quests to exorcise them for good.  Getting Wonderbeard to leave “Beardy’s Bluff” will require 20 finished quests, “Bung-It-In Billy” won’t leave “Mount Gobble” until you’ve completed 24 quests, and so on.  Quests present challenges and variations on gameplay, such as “squash 20 rascals in a row,” “only squash red monsters and knock Wonderbeard 120m,” or “make it to the bottom of the hill without touching anything.”  Although the specific assignments vary, you’ll usually be tasked with squashing certain types of monsters or shoving a Bully Beast a certain distance.

Because of the quest system and the generally forward-moving gameplay (you can send Fat Pebble in any direction, but an avalanche of clay behind him forces you to move on fairly quickly), Clay Jam feels primarily like a finite runner.  Its unique twist comes from the fact that as you spend clay to rebuild and repopulate Clay Jam, Fat Pebble will have farther to roll and more monsters to squash, continually increasing the playing field and potential for growth (up to each hill’s completion).  This keeps the game fresh and makes each unlock more rewarding, beyond the already glee-inducing adorableness of some monsters (the sausage beasts scuttle back and forth like terrified lobsters).

Not everything in Clay Jam is up to sausage beast par, though.  The aforementioned quests, while mostly challenging and fun variations on standard play, also contain frustrating requirements.  Certain assignments, like making it to the bottom without touching anything or only squashing a specific color of monster, limit your ability to complete the two constant goals of the game—getting large and knocking Bully Beasts into oblivion.  These quests are to Clay Jam what the much-hated “Cow-Bear” level was to Katamari.  Unlike the only twice-used Cow-Bear, though, these types of goals reoccur frequently in Clay Jam.  In addition, there’s no way to skip or swap out a current quest.  Although you can move on to the next hill whenever you have enough clay to “unlock” it, you can only defeat each Bully Beast by completing the quests assigned to you.  With IAPs of extra clay available, buying your way out of a quest seems like a logical feature, but one that is currently unavailable.

Regardless of these disappointments, Clay Jam is an extremely satisfying experience shaped from mounds of sheer joy.  Its graphics, creatures, music—and even the “tactile” response of gouging the clay world—are all constantly rewarding and hard to put down.  For as often as I shouted in frustration at a quest, I laughed out loud ten times as much.  During one load screen, the game told me “I like you.”  Hey, I like you, too, Clay Jam.