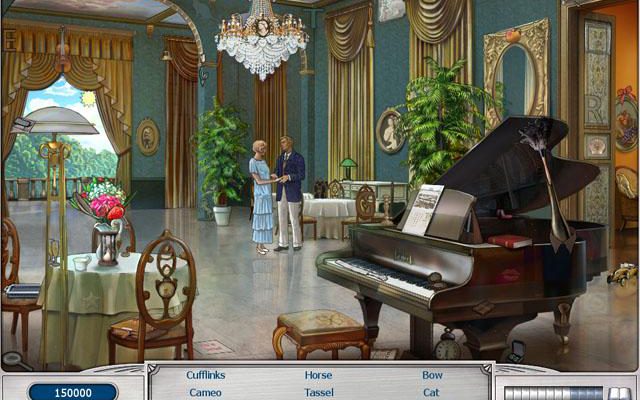 Hidden object games have been playing follow the leader for so long, copying traits from the hit of the moment that it’s oftentimes difficult to tell one apart from the other. Enter Classic Adventures: The Great Gatsby, a game so fresh and innovative that it practically feels like an entirely new genre. Part HOG, part word puzzle, part collectible hunt, its brilliance will undoubtedly be the inspiration for scores of imitators.

The game loosely follows the narrative of the F. Scott Fitzgerald classic, The Great Gatsby, which takes place during one particularly eventful summer in the posh New York neighborhoods of East and West Egg. You play as Nick, cousin to Daisy and summertime next door neighbor to Gatsby himself, a mysterious man of copious wealth. The dialog and narration are taken right from the book itself – though whether that’s a plus or a minus depends largely on your opinion of Fitzgerald’s writing style – as are the locations that you’ll be searching, such as Gatsby’s house. 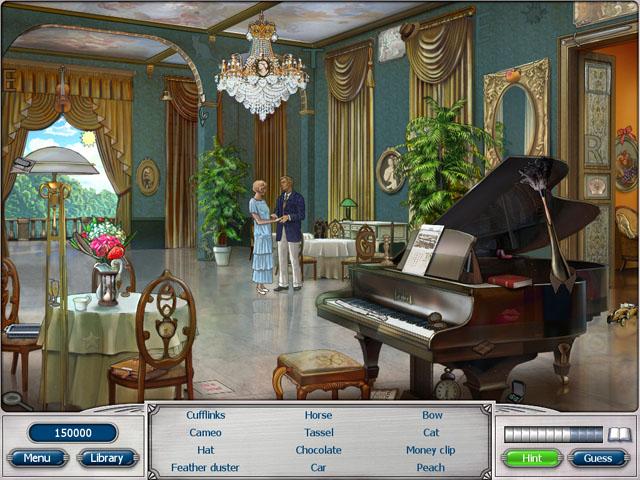 You’ll know that you’re playing something unusual the moment Classic Adventures starts, asking you to find five clocks in the scenery that’s moving past you. You can ignore them completely if you want – they’re just there to give you some bonus points – but you can also replay the scene if you didn’t catch them all on your first pass. The game has many moving scenes, some required by the plot, some not, and while their mechanic isn’t that huge a departure from normal searches – it just adds movement – their effect on the game as a whole is striking. With that one simple change, Classic Adventures becomes an altogether new experience.

In most scenes, you’ll be performing a standard item search, locating objects on a list provided, but they aren’t the only things you should be looking for. Each location also has a number of letters that, when found, will spell out a word relating to the scene. You can guess the word before tracking down all the letters, Hangman-style, to fill up your Hint meter even faster, but whichever approach you take, getting the word right nets you a big bonus. Finding the book hidden in each environment will get you yet another bonus, which matters when it comes to decorating your library. 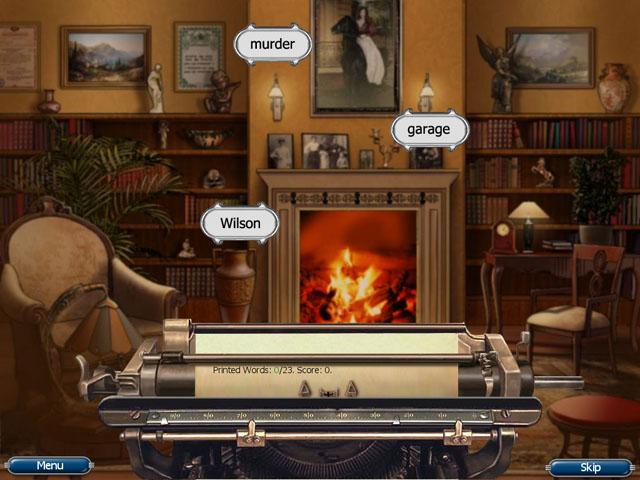 Many games give you trophies for achieving certain benchmarks while you play, but Classic Adventures takes it a step further by giving you a place to display them. Your library starts off fairly spartan, but fills up as you use the points you earn in the game to buy furniture for it. You’ll find yourself working extra hard to finish a level without using a hint or find objects extra quickly to rack up the points you’ll need to afford the Tiffany lamp or the bar cart. (The books not only net you points but also help fill out your bookshelves, so make sure you track them down.)

In some locations, you’ll also have to solve a simple puzzle or two before you can move on. It’s usually something appropriate to the scene, such as helping to fix a flat at a garage or preventing party mishaps during a bash at Gatsby’s. Calling them “puzzles” is a bit of an overstatement, though, as the game flat out tells you what you have to do, leaving you with little to do except carry out orders. After being told that mixing martinis for Daisy, her friend, and her husband will require gin, vermouth, ice, and olives, it doesn’t take much effort to spot the ingredients on the bar cart, pick them up and put them together.

Classic Adventures: The Great Gatsby turns the rapidly growing stale HOG format square on its head, creating something that’s familiar yet also brand new. Even if you don’t enjoy the source material (I can’t stand it, personally), if you’ve ever thought for a moment that you might want to try a hidden object game, make sure it’s this one.