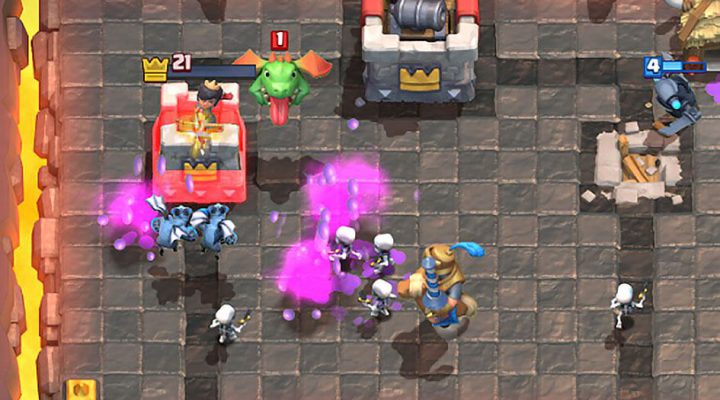 Tons of strategy in building your perfect team

Plenty of variety in troop types

While it serves a purpose, you'll have to get used to waiting for chests to open

As far as mobile games companies go, Supercell have proven themselves to be something of a unique beast. They’ve consistently been one of the most profitable publishers in the space, and in 2015 were purportedly raking in a 5 million dollars a day through Clash of Clans alone.

But unlike a lot of games companies in this position, they haven’t tried to capitalize on their success by churning out countless games in countless genres, hoping that one of them might stick. In fact, with the exception of a few soft launches that never emerged from the shadows (Smash Land, Spooky Pop), the studio has only seen three releases hit the App Store and Google Play: Clash of Clans, Hay Day, and Boom Beach. 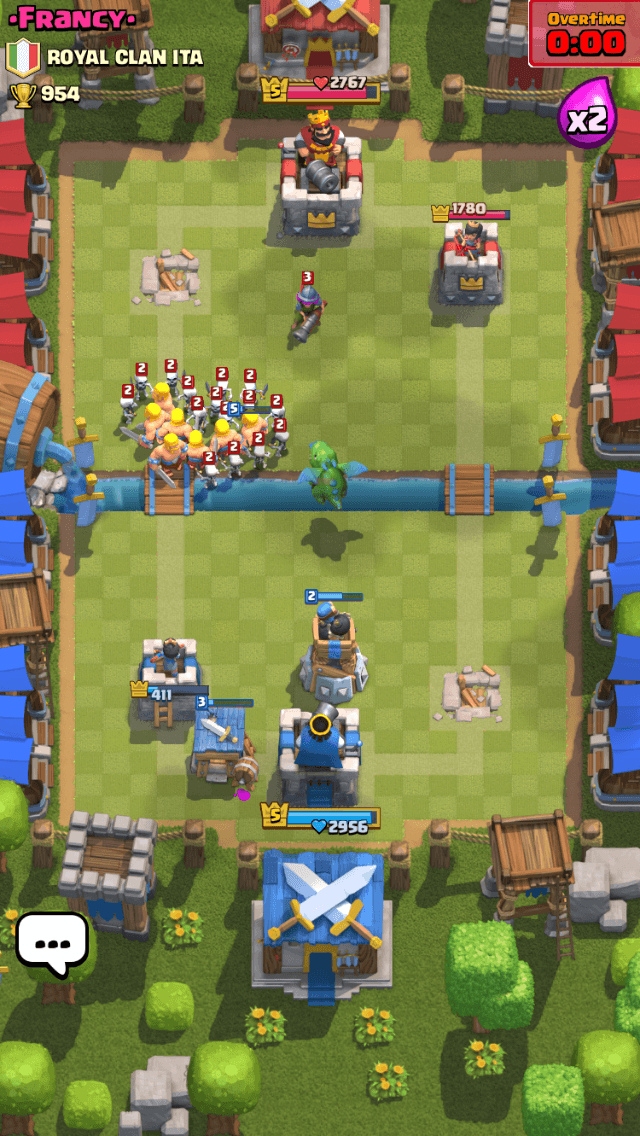 The first spin-off in the Clash of Clans series, Clash Royale retains the spirit of its ancestor while abandoning its gameplay. Yes, players will still square off in competition against one another — but there’s no base building; no wait timers. Instead, Clash Royale pits players against each other in live multiplayer battles that take place on single screen maps. And while the backgrounds change, the layout always remains the same. 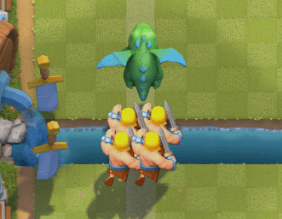 Having a static arena gives players more room to develop tactics they can use over time, making the strategy in Clash Royale closer to that of Chess than Clash of Clans. Studying the moves and intentions of your opponent is key to your success. And, like Chess, it’s the sort of game you could expect strategists to write about endlessly, espousing one plan of attack over another.

Ultimately though, Clash Royale is a game that benefits little from comparisons. It’s very much its own experience; something seemingly born from a love of MOBA-style lanework and a complete understanding of modern mobile gamers. In practice, the experience looks a little something like this:

The round is starting. Why isn’t my opponent playing a troop yet? I’ll wait them out. My mana is charging up, and the more I have, the more cards I can play. They’ve just played their first card and unleashed a Goblin Hut and a Giant in the left lane. The fool! They’ve used up all their mana! I’ll send my Baby Dragon up the left to defend against those, and send my Prince to swiftly attack their unguarded tower on the right!

Gameplay in Clash Royale is centered around two things: cards, and the mana needed to play them. Players will build a deck of eight cards to bring into battle, but only four will be accessible to them at any time. When one card is played, another is drawn from the deck to take its place. Choosing a card will cost you mana (each card has different costs based on its strength), and allows you to place a troop, spell, or building anywhere you like within your territory. At the beginning of the game, your territory is limited to the bottom half of the screen. As you take out opposing towers, however, you’ll gain some ground on the other side of the board as well.

The challenge comes from that push-and-pull of trying to balance offense and defense. Keeping an eye on where (and which) troops your opponent is placing while also trying to plan your own path to victory is an electrifying juggling act, and with matches only lasting three minutes, the pressure is always on. 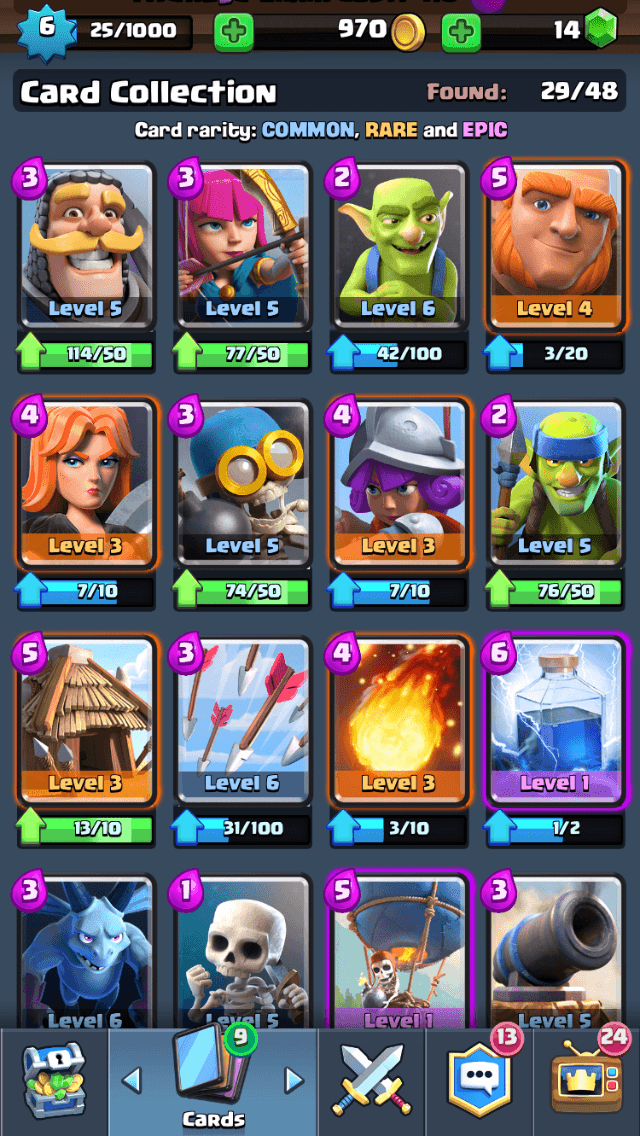 Like most free-to-play games, Clash Royale’s core gameplay really only makes up half of the experience. Winning matches will earn you chests that take hours to unlock, delivering rewards of new cards and currency. Duplicate cards can be spent to level up your existing troops, while new cards are new (and who doesn’t love that?) 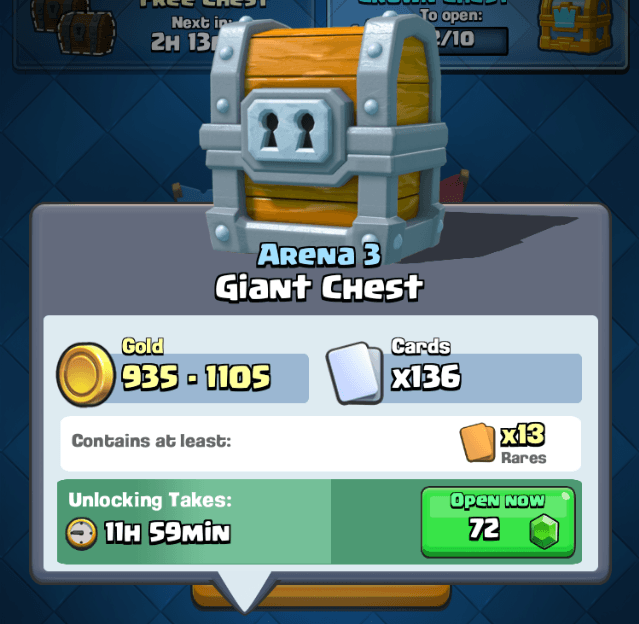 Naysayers may be quick to call the timed locks on chests just another version of the wait timers that I swore weren’t part of Clash Royale, but in practice, it’s clear they serve another purpose. As a game whose players live and die by the strength of their cards, slowing the pack opening process is essential to keeping the game balanced. Otherwise, good players would constantly get stronger while weaker players could never catch up.

By slowing the opening process (and limiting unopened chests to a maximum of four), Clash Royale has deftly solved this problem. Unless you want to spend premium currency, of course. Then you can open chests to your heart’s content.

Clash Royale is one of those rare games that not only gets everything right, but does so while trailblazing a new formula for mobile games. Whether you love or loathe Clash of Clans, Clash Royale is a worthy addition to any mobile gamer’s home screen playlist. Multiplayer experiences on mobile rarely get as good as this.