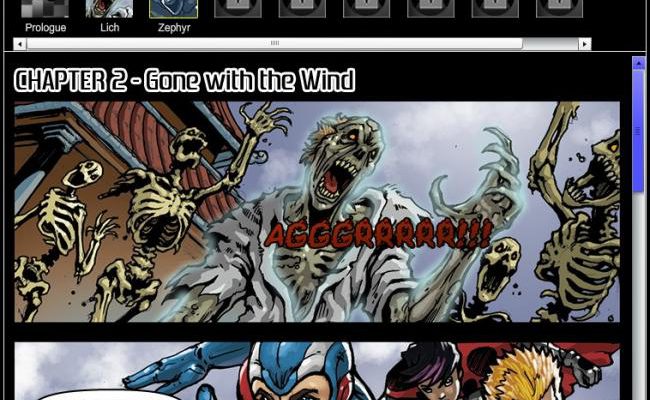 CLASH: Rise of Heroes is a collectible card game that makes you a hero on Facebook

When I was a kid, and I admit still today, there were two nerd things that I loved: comics and collectable card games. CLASH: Rise of Heroes gives me both without a trip to the comic store.

The game is set up as a comic book with each chapter culminating in a battle. In the beginning campaign, the hero is a rookie member of the United League of a Heroes and must stop an evil scientist from creating an army of mutants. A second campaign, Darlok Returns, is also available and it has zombies. How cool is that?

Each chapter begins with two or three pages from a comic and at the end the hero must battle and win in order to continue. Players begin by choosing two powers from the following list: fire, energy, might, archery, electricity, munitions, psychic and water. Players then get to choose from three body types: muscular male, muscular female and giant brute. 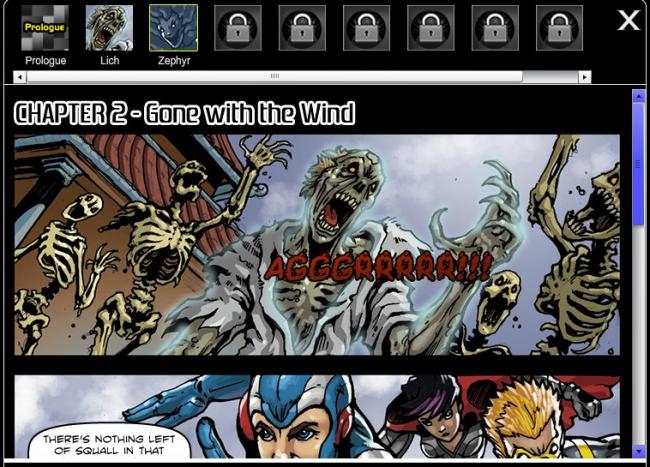 CLASH offers quite a bit of customization as far as color, face, costume and masks to choose from so players can make the character they want. This will be the face of the players’ hero on his card. The game gives you a starter deck, which is a number of common and uncommon cards. These cards include supporting heroes (called allies), power cards that are actions using the hero’s powers, and items that help during play.

The meat and potatoes of the game is the card battle. If players have played a collectible card game before, then they likely already know the format of the battle. The hero and enemy card face each other there are two slots on each side for allies.

At the beginning of the turn, insight points are distributed. These are the amount of points you have to use on the types of cards. The first one to lower the main hero or enemy’s hit points to zero wins the battle.

Along with the card types, there is also rarity. Common cards are pretty easy to get, cost few insight points and have small effects. The cards are common, uncommon, rare, epic and special edition. The higher they are on the rarity chain, the larger effect they have. Cards can be purchased using hero points that are earned after battles, earned through defeating enemies and purchased using coins, which are purchased using real world money. 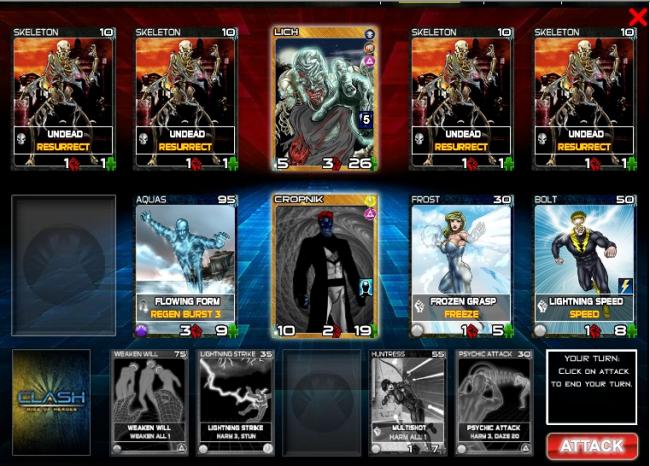 Along with campaigns, players can accept missions, which are single battles against enemies and player versus player combat. After each battle, the player earns hero points, experience and occasionally a new card.

As a collectible card game veteran, this game was a fun and engaging game that had me coming back again and again. There is a rich mythology that describes every aspect of the game from the heroes and villains, how their powers came about and opens up some fun ideas for future campaign expansions.

The only drawback is for people who are unfamiliar with the collectible card game concept. There isn’t much movement or action. CLASH does a great job of adding animations to the actions, but its still a card game. It can also be a little hard to understand if you’re not familiar with the genre. 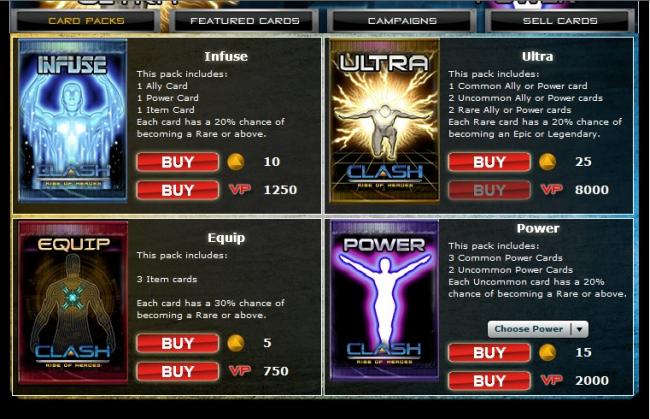 CLASH takes me back to the days sitting in my dorm room playing similar games for hours on end. If you like the strategy of choosing the perfect card and the excitement of playing your favorite card, then Clash is the game for you.