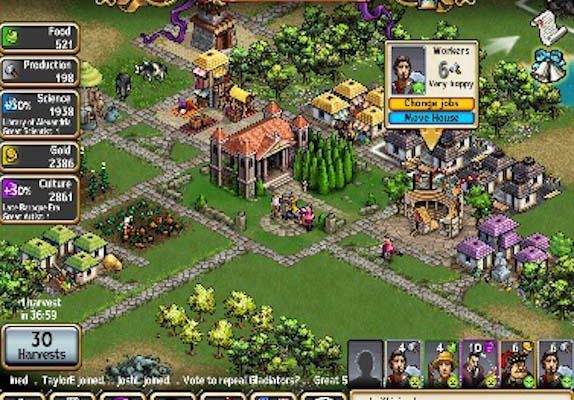 When news of Civilization World first hit the mainstream gaming press back in 2009, the hype was such that you could have been forgiven for initially thinking that someone had found civilizations on other worlds. At last, many said, here was the messianic Facebook game for “real” gamers; here was a game that would send Zynga fleeing madly down its perfect CityVille streets. The truth, of course, is a little more complex.

In theory many of the basic trappings of Sid Meier’s Civilization are here. You start out in the year 4,000 B.C., and you toil your way to the near future by properly harnessing the resources of your workers, artists, scientists, and the like. As you expand, you gather the “Great People” necessary to build Wonders (such as the Library at Alexandria), and you earn points that allow you to increase your population, research new technologies, or lead your people to war.

The key difference is the setting. In CivWorld, you only have complete control over a single city-state. A series of tutorials assist you in building your first houses and crops, and you’ll learn to alter the former to produce more of a resource you may be lacking. (For example, if you’re strapped for gold, you should kick out those artists and fill their houses with merchants.) You’ll also find your gameplay limited by your “harvests,” which count as CivWorld‘s interpretation of energy. In an entirely welcome twist, you can play the game’s market by buying resources when the demand is low and selling them when it’s high. 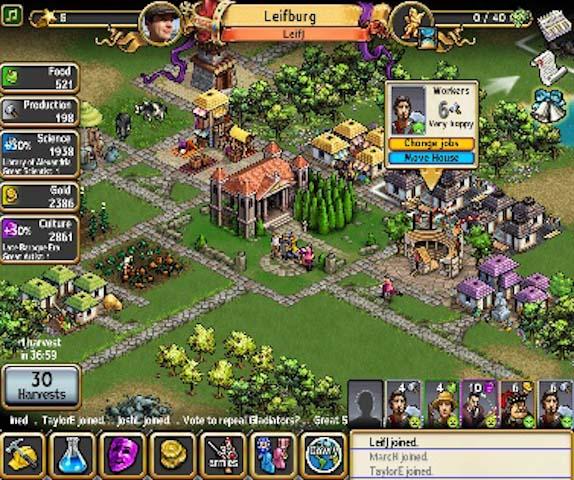 Here’s where Civilization World gets interesting. While CivWorld doesn’t allow you to forge your own empires, it does allow you to build them through the help of other players by allying your city-state with a civilization. This doesn’t mean that you need to spam your friends for gifted items; instead, civilizations allow players to finish projects faster by pooling resources together in real time or voting on issues such as going to war.

CivWorld excels in its social features. If you play one of the mini-games to earn Great People, for example, you might find yourself racing against several others players to solve a jumbled image of one of Cassius Coolidge’s paintings of dogs playing poker for the most points. A twist on the social gaming linchpin of visiting your friends’ towns even makes an appearance: You can marry one of your citizens to another player’s citizens, thus granting a helpful one-time bonus.

If you haven’t already guessed, all this talk of points means that, yes, you can win the game. Winning comes down to which player has the most “Fame” points, and you technically don’t even need to be a member of a civilization in order to win. Once you’ve won the game, you can brag about any trophies or medals you won along the way and then start all over with a new city and a new civilization. 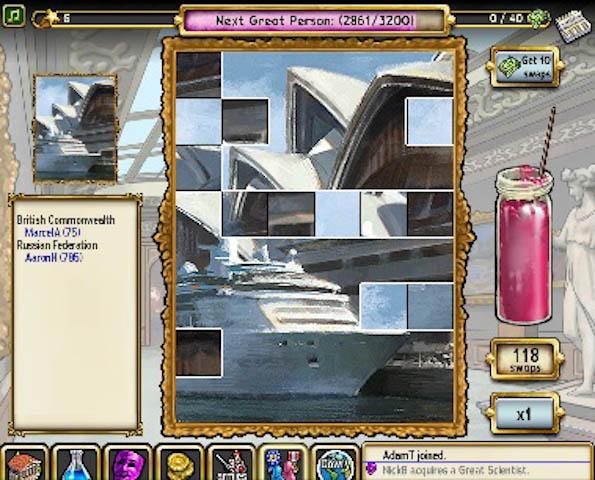 But would you want to? After one playthrough, I found myself struggling to jumpstart history for a second time. For one, the chat and messaging systems seem underused, which contributes to an uncomfortable sense of solitude despite CivWorld‘s outward social strengths. Unless you’re playing with people you know, there’s a good chance that you’ll never speak to other members of your civilization. For another, the military aspect of the game is profoundly disappointing. The card-game style battles drag like a broken chariot, and the thrill of winning is dulled by a realization that you can never truly defeat your opponent as you could in the Civilization games.

The result is an experience that feels more like “CityVille with Benefits” than Civilization. That’s not to say that CivWorld isn’t addicting at times, but social gaming veterans may find that the Civilization brand alone stands as its most fundamental departure from existing titles. Games such as Global Warfare already feature comparable versions of CivWorld‘s much-lauded “social civilization” model. And then there are the ostensibly beta-related issues: the cluttered user interface lacks the intuitive simplicity of Zynga’s menus, the game lags even on powerful PCs, and the current gameplay spirals into tedium all too quickly.

These concerns shouldn’t keep fans of Sid Meier’s legendary series from giving CivWorld a try, but it’s hard to escape the impression that this ambitious effort is anything but the pinnacle of Civilization.