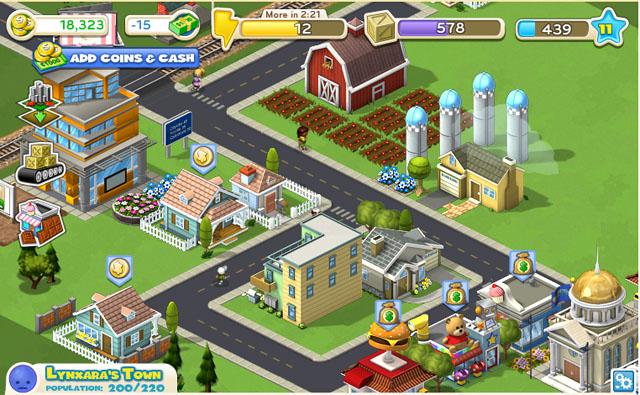 CityVille is Zynga’s long-awaited entry in the city-building genre, which has proven itself amazingly durable on Facebook. Where many city-builders must be played strictly in brief bursts, CityVille actually offers enough to do that you can spend a considerably longer amount of time with it per session. In theory you can only do things until you run out of energy, but I found myself needing to wait for things to happen more often than I found myself waiting for my energy to regenerate.

Like most other city-builders, CityVille is a game of managing timers and networks of friends who happen to play. You need to collect money from businesses, grow crops to resupply them, request materials from friends, and keep track of your franchises in other cities. Gobs of collectibles are available for packrat players, including a set for each individual type of crop, business, and house you might add to your city. Crops can wilt, but it takes a very long time for this to happen. If you do somehow run out of energy, you can do chores in a friend’s city, FrontierVille-style, and get a substantial chunk of energy back.

The basic gameplay of CityVille is the same as it ever is for city-builders. Begin with a few buildings and grow your city into something magnificent, thriving, and deeply profitable. Missions offer objectives that guide you along, making sure you gain population and expand your territory at an enjoyable rate. You can arrange your city in remarkably personalized fashion, thanks to the game’s isometric view and fully rotatable buildings. CityVille is simply more attractive than the top-down view city builders that are currently burning up the Facebook charts, for all that the gameplay is extremely similar. 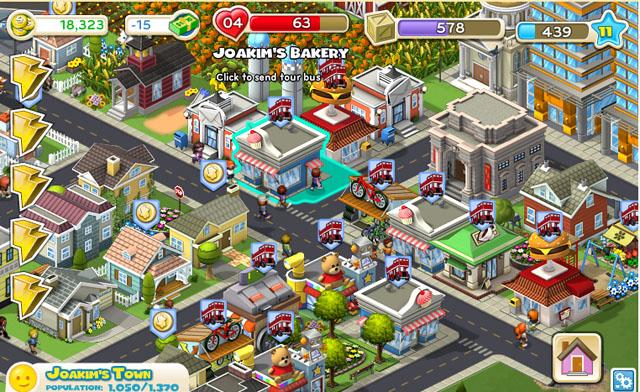 CityVille is not without a few problems. It’s a game that starts demanding players pay a “no friend tax” fairly early in the game. You can’t build certain things without raising your city to certain population limits, but your maximum population is always capped by the total number of community buildings you have available. Community buildings aren’t difficult to start but can be very time-consuming to finish. Each building must be “staffed” by your friends and can’t be finished until it has a complete staff or you spend real money to compensate for the slots you can’t fill. The amount you must pay is trivial, but it still feels galling when your progress is zipping along and then suddenly you hit that wall. 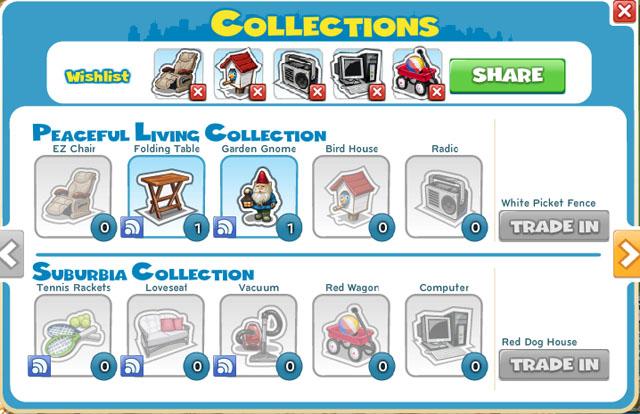 There’s also a heavy reliance on checking notifications and requests in CityVille. The ones that go through Zynga’s toolbar are handled simply enough, but there’s quite a few that Zynga’s bar doesn’t pick up at all, things like bonuses for friends and some requests for materials. To make sure you answer these requests, you’ve got to dig around in the new Facebook gaming interface for the Game Stories feeds, which can be tiresome. It’s not Zynga’s fault that answering certain game requests in CityVille can get annoying, but it does drag the game down a little.