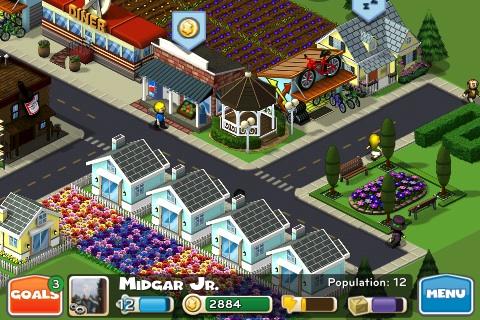 For some, CityVille Hometown might initially seem like a disappointment. It’s not the mobile version of the incredibly popular Facebook game that people were waiting for, instead it’s a separate, scaled-back approach to creating a mobile CityVille. But once you get over the fact that this isn’t simply CityVille on the iPhone, you’ll find that Hometown is an enjoyable experience in its own right.

The first difference you’re likely to notice between the two games is one of scale: Hometown is about building and maintaining a small town, not a massive metropolis. But this actually works quite well, as the reduced real estate is easily manageable on the iPhone’s smaller screen. And just like in a real-world small town, the smaller population means a bigger focus on individual people. No longer are the residents of your town tiny little anonymous people. They have names, and you’ll have to house them, give them jobs, and complete quests to keep them happy.

The core gameplay, though, remains largely unchanged. Collecting rent, purchasing and building homes and businesses, planting crops, supplying goods, it all works just the way it does in the full-grown version of CityVille. The only real difference is in how you get your quests. When a citizen has something they want done, a thought bubble will appear over their head, which you can tap on to get a new quest. It’s not a huge difference, but it’s in keeping with the down home vibe the game is trying to present.

Through the magic of Facebook Connect you can still add neighbors from your Facebook friends list, though what you can do in their towns has been significantly diminished: all you can do is go for a tour of their city once per day. There’s no helping with crops, or collecting from businesses, or any of the other neighborly duties that are available in the Facebook game. You can still send gifts, of course, which remains important as community buildings still require special gifted items to build.

Visually Hometown looks virtually identical to its Facebook counterpart, with the same bright, shiny style, only you spend most of the game zoomed in a bit more. The controls have made a mostly successful transition to the touch screen, as interacting with citizens and businesses and navigating menus is simple and intuitive. Moving buildings and other items around, however, hasn’t fared so well. There are times when you can’t select a building even when you tap directly on it, and even when you do occasionally the game won’t let you move anything around for no apparent reason. It’s especially frustrating considering how well the rest of the game controls. 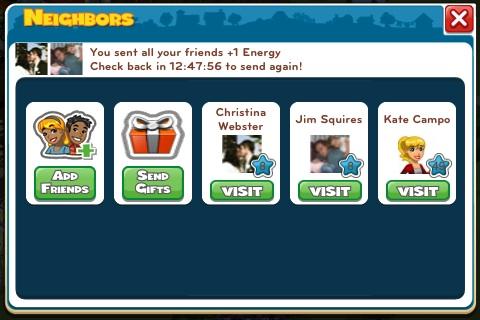 There are a few welcome changes as well. Expanding your city is much simpler in Hometown, as the hard-to-acquire permits are nowhere to be found. The process of creating community buildings, too, has been made easier. While you still need gifted items to complete them, you also have the option to override this by spending either premium currency or in-game currency to finalize construction. This is a welcome change for those who don’t have a multitude of friends playing the game.