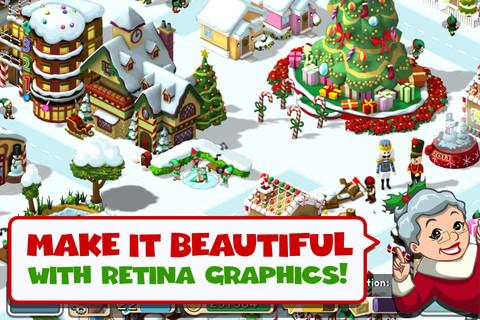 As the year begins to wind down and the days creep closer and closer to December, there are a few things that seem almost unavoidable. You’ll eat a little too much at Thanksgiving, “best of the year” lists will abound, and holiday-themed games and updates will hit the App Store. CityVille Holidaytown is one such holiday-themed release – and you’ll be delighted to know that it’s Christmas done right.

When it comes to describing the bits and pieces that make up Holidaytown, you really don’t have to look much further than our review of CityVille Hometown. Holidaytown is little more than a snowy re-skinning of Zynga’s earlier attempt to bring their popular city-builder mobile, and all of the mechanics work exactly the same. In fact, I’d be hard-pressed to find a single gameplay aspect that’s new here.

Normally this would be a pretty big complaint when talking about a spin-off or a sequel, but when it comes to a timely holiday release, sometimes all that’s needed is a worthwhile embracing of what said holiday has to offer – and CityVille Holidaytown does this in spades.

As the game begins, you’ll find yourself in the North Pole. Santa’s house is there, but all of the elves have left town after a terrible blizzard. You’re challenge is to build enough housing to bring 60 elves back and save Christmas. It’s a simple, schmaltzy premise – but it’s more than most city-builders give you. And as you’d hope to find in a game full of holiday glee, every inch of this CityVille spin-off is dripping with Christmas goodness.

Instead of burger joints and flower shops, you’ll be building Christmas tree lots and poinsettia shops. Instead of growing corn and carrots, you’ll be growing reindeer food and candy cane crops. Townsfolk? Santa and his elves. Income-boosting decorations? Snow globes, carollers, and more. CityVille Holidaytown is the very definition of winter wonderland. 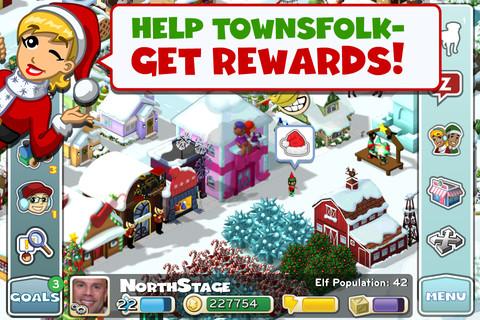 The game also features something of an Advent Calendar, and starting on December 1st for 25 days, the countdown page in their shop will unveil a new premium item available for purchase, like ski slopes and ice rinks. Premium items aren’t everybody’s thing, but if you don’t mind spending a few hard earned dollars, CityVille Holidaytown is prepared to give you a unique daily offering every day in December that leads up to Christmas.

Holiday updates like this are pretty common nowadays, especially in the world of freemium games. Often though, those updates just offer a couple of minor tweaks like a snowy landscape or the occasional snowman, and leave everything else the same. By making Holidaytown a standalone app rather than an update to the existing Hometown, Zynga was able to re-envision their entire offering with a Christmas twist without upsetting the status quo.

If you ask me, I’m pretty sure they just made Santa’s nice list.