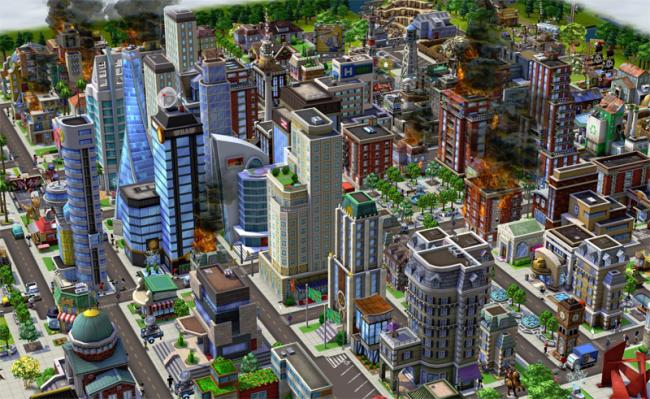 This is the end, my only friend, of the Zynga era of social gaming. Or so the conventional wisdom goes. As the company scrambles to face an uncertain future by embracing real money gambling and third party games, it’s not giving up on the Ville games that made it a giant in the first place. And with CityVille 2, Zynga shows that there may yet be some bite left in that dog.

If you have a Facebook account and somehow avoided trying the first CityVille when it was the most popular game on the social network, it’s safe to say that it was a city builder full of Zynga’s trademarks: Lots of clicking on things to collect resources and plenty of begging friends for items or help with quests, all housed in a pseudo-3D landscape containing numerous cute animated characters. CityVille 2 is in the same vein, but buffed up, streamlined and injected with an actual narrative.

As the new mayor of a small city, you are led through the nuts and bolts of gameplay by Governor Maxley, a smooth-talking fellow who was also your predecessor. Someone apparently had a score to settle with Maxley that may impact you, too, as an early tutorial quest sees the Mayoral Estate blown to pieces. The continuing investigation into that crime introduces you to some of the game’s other colorful characters, including an odd couple pair of cops, the nature-loving Rosemary and Maxley’s ex-football player rival Kurt Steele. Or as he would put it, Kurt Steele!

One thing that will quickly jump out at you is the huge graphical upgrade from the first CityVille. Buildings are rendered in much more convincing 3D fashion and have a greater level of detail. Along with the usual full screen and zoom options, you can switch between five different camera angles to get a better look at how your city is laid out. All of this seems to have come at a small price, though, as the game will freeze up sporadically and need a page refresh to get back on track.

Play long enough and the scene will switch from day to night (a light switch also allows you to do this whenever you want), illuminating the streets with lights from the buildings. There are vehicles in the streets, too, driving wherever you put down a road. Clever little details abound, like the way a double-width road automatically turns into a parking lot – with vehicles actually pulling in and out of the space – and crossing streets will spawn traffic lights and crosswalks at the intersection. 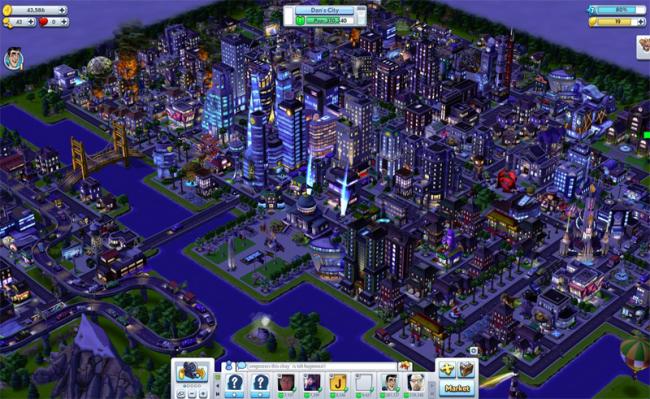 You’ll still be clicking on things regularly, but each type of building has its own distinct purpose. Houses generate shoppers, which in turn patronize businesses that produce coins. Other buildings like the Manufacturing Plant and Bazaar are crafting centers for making items used in the construction of more advanced structures. Even the cars and trucks can be harvested for citizens and builders. Everything works together in a symbiotic fashion, though some players may find remembering the multiple steps in some supply chains a bother.

Tying everything in CityVille 2 together is a skill-based mini-game that can earn you extra coins and items. Admittedly, stopping a moving needle in a certain part of a bar isn’t much of a skill, but at least it’s something to keep players from mindlessly clicking on things as fast as possible. Hit the sweet spot enough in a given time and you’ll enter Approval Mode, where your grateful constituents will give you even more loot on your next four clicks. All of your actions cost Energy, a constraint the genre hasn’t found a way to outgrow.

While the game doesn’t share FarmVille 2‘s focus on keeping things at a smaller scale, it also doesn’t let you just expand aimlessly. Expansion Plans don’t come that easily, and some zones can’t be added until specific quests are completed. Each new district you add can be specialized to give bonuses to housing, commerce or manufacturing, meaning it makes sense to cluster like buildings together to gain the maximum benefit. 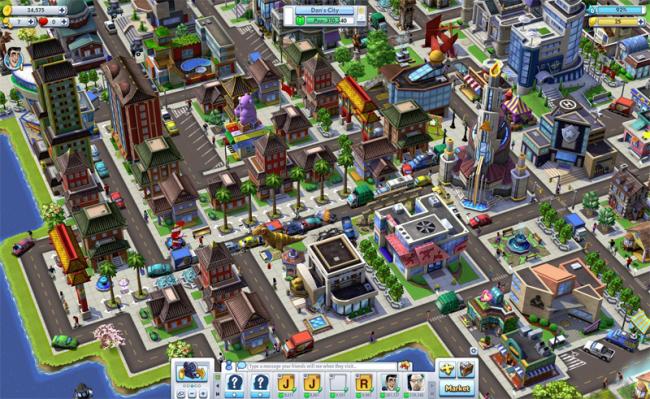 According to Zynga, Golden Keys can help you unlock (get it?) content faster. According to this reviewer, it’s how the company makes money off the game, serving much the same purpose as the premium currency in other Ville titles. CityVille 2 is structured in such a way that it almost fools you into thinking you could go without Golden Keys or adding friends for gift-exchanging purposes. But unless you are extremely patient and content to progress very slowly, chances are you will need one or the other.

Say what you want about Zynga (and plenty have done just that), but if it’s fated to never return to its previous position of dominance, at least it isn’t going down without a fight. CityVille 2 keeps much of what made the first CityVille so popular and adds improvements in just about every area. Mark my words: it’s going to be the number one game on Facebook sooner than later.