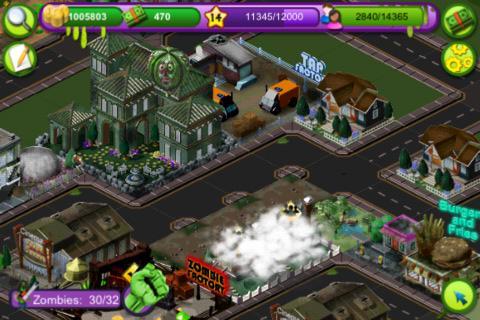 City Zombies takes from the rest of the social city-building bunch, and adds a smitten of zombies. While this combination sounds like it would be the recipe for an incredibly interesting social experience, City Zombies actually ends up on the low end of the fun scale.

On both the iPhone and Facebook, we’ve seen many city-building games that prove to be interesting for quite a while such as Social City, City Story and We City. Each of these games has proved to be interesting for a while at least with several things to do each day that are actually pretty fun. The difference with City Zombies is that it has zombies (shocking, I know) and about half the fun of these other games.

Where City Zombies lacks fun is in the variety of things to do, and the lack of any sort of viable way to make funds to do it. Starting out in City Zombies, you are given a good amount of coins to build your city with. The problem is that, once you’ve spent all of these initial coins, you’re going to find it excruciatingly difficult to earn more and therefore have less and less interesting tasks to perform each day.

In City Zombies, there are a few types of factories for you to construct and use. One type sells goods in order for you to make money off of (as stated, these factories do not actually make much profit) and another type of factory that makes zombies for your town to use. On top of the factories, you can build types of lodging and residences in order to add to the population to your city. With a higher population, you can build more factories. However, there are population caps that can only be extended with more “Fun” buildings that cost quite a bit of cash as well. It should be noted that these factories, residences and buildings only require a single tap to collect from.

While all of the actual city-building mechanics work well, there’s just simply not enough money to go around. The only other option other than waiting days to make enough money to purchase a single building is to spend real money, which most people are not willing to do. 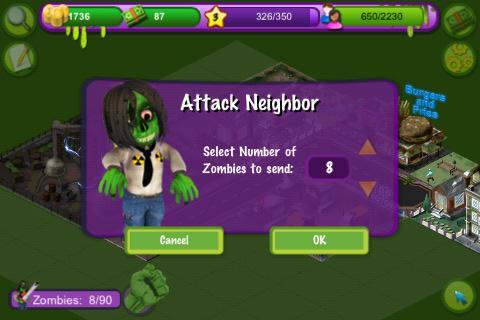 One element that helps City Zombies stand out a bit actually borrows from another zombie social game on the iPhone, Zombie Farm, and has you sending an army of zombies (of at least 8) to a random neighbor. Once your zombies have arrived at the neighbor’s place, you must rapidly tap on the fist icon on the screen in order for your zombies to destroy and conquer this other city. Once complete, you will earn a small bit of experience and coins. Once again, the issues that plagues City Zombies is that you earn only a small bit of experience and coins – especially for the crazy amount of tapping you must do in order to complete this exercise. Is it worth the sore thumbs? I wouldn’t say so.

Sound and graphical fidelity rack up another complaint we had with City Zombies, as they are both fairly bland and just plain gross. Everything looks very muddy, the font is hard to read (even on the iPhone 4) and the sound could make a person nauseous after too long due to some gruesome sound effects.

Fear for Sale: The Mystery of McInroy Manor Review