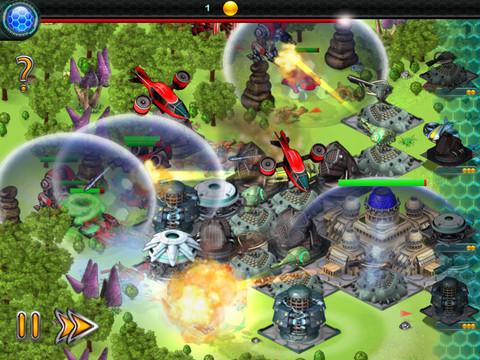 City Conquest is a unique blend of tower defense and real-time strategy.

It’s something of a given these days that developers have done everything they can do with the tower defense genre; the only solution, it seems, is to take what works and turn it on its head. In this case, Intelligence Engine Design System has attempted what could have turned out to be the Frankenstein’s monster of casual gaming: Over a solid skeleton of real-time strategy elements that should sit well with fans of city builders as well, they’ve stitched together fragments of the some of the best traditional tower defense games on the market. It’s a testament to their skill that the end result attracts rather than repulses.

City Conquest is technically a paid app, but the first five of its 20 missions act as a tutorial of sorts that let you experience the nuts and bolts of what it has to offer for free. It’s strongest in the defensive stages, which pit you against successive waves of enemies—some of which even attack from the air. As with a traditional tower defense game, you’ll spend much of your time erecting weapons ranging in strength from simple cannons to devastating ground thumpers, all while routing group troops through strategically placed paths in order to defend your base. Real-time strategy elements come into play with the nearby mines that provide resources for your expansion, and tension builds as you try to balance the income of gold with the placement of new units.

The offensive missions don’t hold up as well, but that’s only because the offense focuses too heavily on swarming the enemy base with enemy troops, tanks, and other items of the sort. You don’t have much control over the actual troop movement, and the true strategy still lies with the defender. If your opponent’s focused enough, they can keep blocking your troops as you try to steer them toward the enemy base, and you’ll thus spend much of your time selling blocked units and repositioning them for a new opening. Almost from the start, your main concern is simply deploying enough heavy offensive units to shrug off the heat from offensive turrets.

Thankfully, though, there’s a lot more to City Conquest besides simple offense and defense. Beyond the din of battle, for instance, most of the gameplay centers on expanding your territory through the use of upgradable skyscrapers, placing each successive one on the edges of your territory as your territory grow to take over key objectives. It’s a fast process (much, I like to say, like the near-overnight development of Dubai), and there’s an extra degree of complexity involved in that overtaking some of your opponent’s territory involves juggling two types of currency at once. When everything’s in full swing, though, the gameplay benefits from heavy feats of multitasking that keep both sides on their toes. 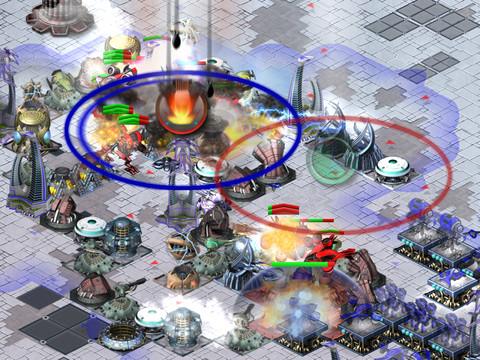 Imagine, then, how frenzied it gets when you’re up against a real player. The AI for the normal campaign is sufficiently competent, but City Conquest has the potential to shine its brightest with its multiplayer option (which includes options for online play as well as a local “hotseat” mode centered around passing your device back and forth with a friend). Unfortunately, I’ve had a problem finding anyone online during my playthroughs over the last couple of days. Still, when I do, the game delivers hefty doses of fun, and additional challenge modes provide even more variety.

City Conquest stands as proof that the tower defense genre hasn’t said its last word. It feels a little too ambitious at times (the RTS elements in particular sometimes suffer from a mild tacked-on feeling), but its beauty lies in the fact that it works in spite of that. If you’re a fan of either tower defense or real-time strategy games, City Conquest is worth a look—particularly if you bring along a friend.