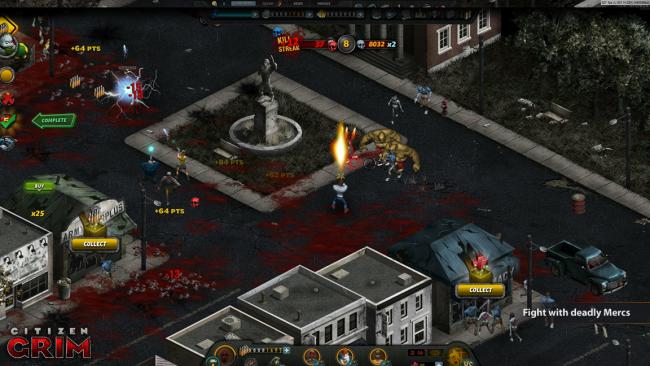 You know your character’s a tough cookie when he can take a few seconds to stop killing zombies (okay, “reapers”) in order to build entire shops from the ground up. Even Chuck Norris could never match that. But that’s everyday fare in Citizen Grim, a new top-down social action game from the same folks that brought us Mercenaries of War. You’ll find none of the happy faces and cute visuals that usually define Facebook games here; true to its name, Citizen Grim is a gritty, bloody affair that’s full of the guts and wanton slaughter that we in the 18-45 crowd apparently love.

It’s also not that hard to pick up. At heart, it’s a largely satisfying mixture of top-down action games like Diablo and basic tower defense titles that bids you to wander the streets of several dilapidated small towns, clobbering zombies (sorry, “reapers”) with everything from a basic pistol to shovels and electro-cannons. The reapers themselves shamble into town in waves, which you can activate by pressing a conveniently placed button at the top of the screen, and between (and during!) waves, you can build ammo shops or pharmacies to replenish your increasingly important stashes of bullets and medpacks after several minutes (provided the reapers haven’t torn them down). Do enough of that, and you’ll fight bosses that allow you to progress to the next stage, including such outstanding personalities as the Preacher From Hell.

It largely works well, although you might find that your guns sometimes have an annoying habit of accidentally going off because you clicked on an enemy that happened to wander onto the same spot you clicked for movement. That can mean the difference between life and death when you’re trying to avoid combat or save your limited ammunition. If you run out, though, it’s ridiculously easy to game the system by leaving a couple of zombies alive and just waiting out the timer for the shops to restock their ammo or medpack supplies before moving on to the next level.

Yet even then, there’s a building sense of urgency that only grows stronger as you play more, as more zombies means more chances that they’ll tear down your shops and drain your ammo enough that you’re stuck swinging shovels at them and tossing Molotov cocktails. Sometimes the AI is wonky — complete with reapers who seem more interesting to getting stuck on terrain elements than chomping on your brains — but enough of it works that you’ll occasionally break a sweat. Indeed, compared to a lot of Facebook games in this genre, Citizen Grim is hard, although in it’s best moments, that’s a good thing.

That’s why it’s so important to take advantage of the level design, which already offers plenty of opportunities to route the reapers through the deserted streets. The ammo and medpack shops (and banks, if you feel like spending premium currency) aid in amplifying this sense of a maze, since building them fills in empty lots that could otherwise be used by the zombies as shortcuts across the blighted terrain. It’s a nice touch that makes keeping your buildings up serve a double purpose: not only are they your all-important sources of lead-based zombie repellent, but their physical structure affects the flow of the game itself. 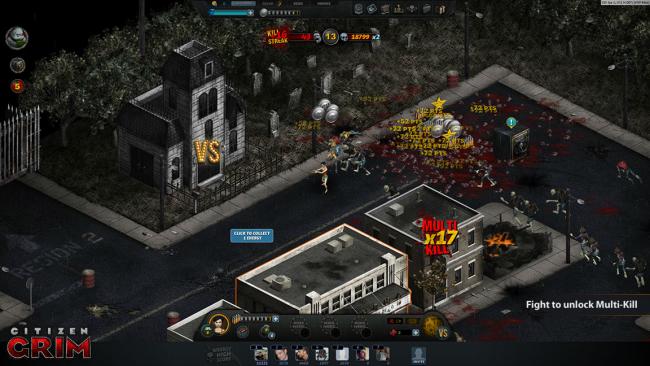 The best part is that you can bring your friends along as “mercenaries,” although you can also buy them for a ton of in-game silver or slightly more agreeable premium currency. But therein lies another slight rub: since Citizen Grim grew out of a partnership between developer Eruptive Games and Zynga, you can expect plenty of offers to plunk out some cash, particularly in the form of awesome premium weapons that drop as early as the first round and tease you to try them out. It’s always possible to ignore them, though, and I’ve played through a lot of Citizen Grim without feeling like I need to spend cash.

Still, Citizen Grim is a fun experience, and one that’s complemented by a pulpy 1940s aesthetic and appropriate music during combat (although, oddly, you won’t hear any when you’re making your character or sitting through the first few screens). Even if you’re sick of the current oversaturation of zombie games, this one’s worth a look.