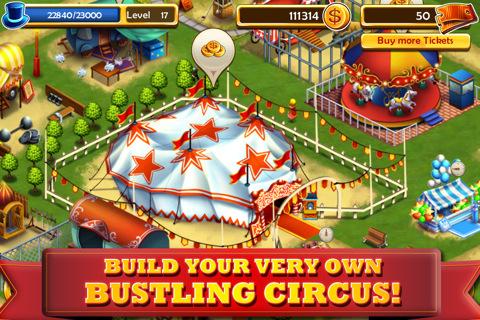 Circus City has all of the attractions you’d expect from a circus. There are magicians and trapeze artists to watch, sugary treats to buy, and games to play. But as a business management-style social game, you unfortunately don’t get to experience any of that while playing. Instead your actions are relegated to the standard array of collecting rent and building attractions. If it weren’t for the circus theme, we’d have a hard time telling this was a new game at all.

There is no story in Circus City, or even any goals or quests to push you along. You’re simply trying to build up a fantastic circus from nothing. Your main attraction is the big tent, which is where your performers do their thing. Each act takes a certain amount of time to complete, and as you gain experience levels you’ll be able to make the tent bigger so that you can put on more extravagant performances with multiple performers.

Aside from that there are stalls that sell toys and treats, as well rides and games like the shooting gallery or haunted house. You’ll also be building dwellings where your performers can train to earn you experience. It may sound like there’s a lot to do, but there really isn’t. Circus City plays it incredibly safe, offering gameplay experiences that are available in virtually every other social game, while featuring nothing new of note, aside from its setting. This means that the game largely boils down to collecting money, building attractions, and occasionally scheduling performances.

And since the game is largely structureless, with no goals to provide new things to do, Circus City proves to be less than compelling. The simple act of building up a circus isn’t really enough, especially when the act of doing so is so dull. Circus City also features the barest of social features, using Game Center and Facebook to let you play with friends, which amounts to simply visiting their circus to earn some rewards. 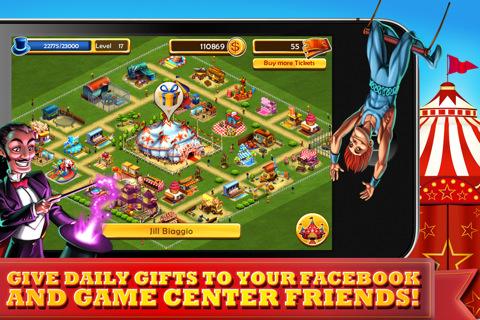 Visually the game features a nice art style, with detailed buildings and good looking character portraits. But it all feels a bit lifeless. Aside from the customers walking around and a few flags fluttering about here and there, there’s virtually no animation at all. This is especially disappointing for the rides that remain motionless at all times, even though customers are apparently enjoying them.

Circus City is one of those games that, while not necessarily bad, seems somewhat pointless. Sure, it offers a new setting that hasn’t been used to death in the social management genre, but that’s it. The gameplay is of the cookie cutter variety, and, worse still, is missing some key elements like goals and collections. You’re likely better off waiting for the next carnival to come into town.