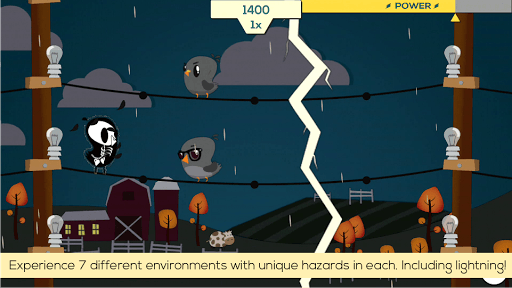 A bird in the hand.

Circuit Panic has helped me discover the cure to angriness. The game begins with three comically rendered birds named Rob, Larry, and Gus perched on three power lines, and it’s your job to keep these guys alive by dodging the electric current surging beneath their talons.

Whether you’re playing Survival mode for the points, or Story mode for the scenery, the gameplay mechanics remain the same: you move your little birdies by touch, swiping upwards to jump to a higher rung, or downwards to swoop to a lower one. Swipe to the left or the right and you’ll leap in that direction, respectively. In addition to that, tapping your bird of choice will make it perform a quick hop, which comes quite in handy when the power lines start jolting multi-tiered waves of electric death at your avian avatars in rapid succession. Keep your birds in the air and out of harm’s way, and be mindful of the fact that you’re always two good jolts away from extra crispy.

You’ve got a few power-ups available to help you on your mission to remain uncooked. Boots act as a shield, and they’re good for soaking the damage of one jolt. Bandages will heal your damage and bring your feathers back. The Heart icon is a “phoenix down” of sorts, and will bring a fallen bird back to life. The Clock gives you a bit of Matrix-styled “bullet time.” The Dummy Bird acts as a decoy and will block three surges. The Energy Drink gives you wings in the form of a speed boost. They do help, but in the end, everything comes down to timing and multitasking.

Art and design are top notch here. The background detail of the seven worlds you visit on your trip southward is a bit sparse, but effective. The real stars of the show are your feathered friends. You can tell that the developers spent some time working on their quirky characteristics. They’d fit right in with a web comic or animated short, and the opening animation does a fine job of placing you into their world. You can even customize them with hats, if dressing up virtual animals is your thing. The music here is a high point, as well. Circuit Panic features a soundtrack by Mathazzar, who seems to be channeling old school Danny Elfman through his tunes. 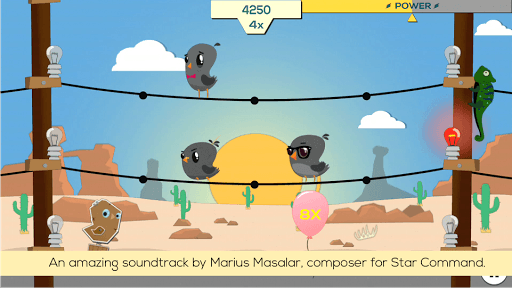 I did come across one strange graphical glitch on my second playthrough, after I cycled through the available options at a quick pace. When I returned to my game, I found that the level introduction graphics were replaced by strange blocky artifacts where the main characters should have been. I wasn’t able to repeat this bit of weirdness on subsequent plays, though.

Aside from that, I don’t really have any complaints about this one. Circuit Panic looks good, sounds great, and plays well. Puzzlers are a dime a dozen on mobile devices, so it’s nice to come across one that has a decent measure of personality to it. Give it a go. I promise you won’t cry fowl.