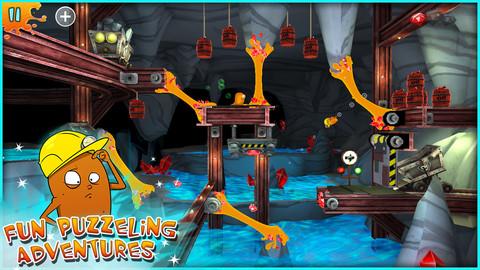 Get ready for Chuck’s mucky cameras and sluggish controls.

Chuck the Muck is the latest in line of fun and quirky games in the Planet Muck universe, right behind last year’s well-received action-oriented Critter Escape and SmashMuck Champions. This time around, one of those lovable critters has teamed up with a big muck named Chuck for a head-scratching, physics-based good time. So how do our critter pal and his new friend Chuck hold up in a puzzle-platform environment?

The story of Chuck the Muck revolves around a little orange critter that lives an enslaved life of mining for valuable red crystals under the ever-vigilant and watchful eye of the Welk Guard. But one day when this critter happens upon an extraordinarily large stash of red crystals, he does what anyone would naturally do in the same situation: high-tail it out of there with the crystals in tow! In the ensuing brouhaha, the critter runs into Chuck, the aforementioned muck, who decides to help him escape with a big goopy smile.

Your playable character in the game is actually this little critter, and the titular character of “Chuck” is simply a static orange blob with eyes and a mouth who just stands idly by at various places in each stage, as you utilize fragmented blobs of what I only assume to be his excess orange body goop as a bouncy trampoline to get to the level’s exit. Even though Chuck the Muck only comes with two different level sets to begin with, this becomes hardly noticeable before long, as there is a wonderful variety to both the environments and puzzle designs in each and every stage contained within the mining-themed world.

The platform-puzzle gameplay has an interesting 3D take on the mobile slingshot mechanic made famous by Angry Birds. The main idea of the game is that players will need to strategically extend several areas of orange goop to make bouncy platforms that their critter can slingshot from. In addition, a few other game mechanics will gradually be introduced, like big red buttons that you need to press with your critter to open up alternative pathways. It’s an interesting blend of some of mobile gaming’s biggest and most successful tropes, and the beautifully rich 3D visuals are always a pleasure to look at.

The game also has some wonderfully animated cartoon cut scenes at the start of each level set which tell the humorous story, and these do wonders to add to the puzzler’s overall personality and charm. But unfortunately, as a whole, Chuck the Muck just feels incredibly sluggish: from the semi-long and frequent loading screens, and right down to the clunky movement of your critter. The touch-and-drag controls to move your critter are extremely awkward to get used to, and the vertical slingshot setups aren’t all that much better with their poorly wavering sensitivity. 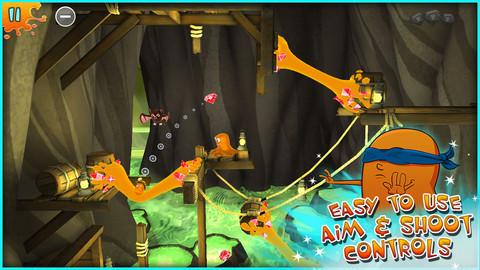 What could have been a fun and addictive platform-puzzle game instead ends up being heavily marred by awful and severely frustrating cameras. Almost every time after you fling your critter outside of the immediate screen area, the camera won’t follow his progress, and remain fixed on the empty orange slingshot. A few seconds later, the camera will finally decide to snap into focus and let you know where (and if) your critter has successfully landed: a lot of good that does me now! The camera also zooms in and out at all the wrong times, which makes it difficult to fling your critter in the way that you want to, because the odds are you’ll be dragging your finger off the actual screen on more than one occasion, and flubbing the launch.

But this seems like a mild complaint compared to the game’s incorporation of Critter Gear, which are special costumes you can wear to grant your critter additional powers and make your puzzling a whole lot easier. Some of these costumes (which can cost quite the pretty penny in the game store) are actually required if you want to snag all three stars in certain stages. Imagine if you were playing a level of Angry Birds, and needed to make an in-app purchase of $0.99 to add an extra 10,000 points to your score in order to achieve that otherwise unobtainable third and final star. That’s essentially the concept here with Chuck the Muck, and it’s an extremely off-putting design choice to say the least. If you’re not aiming to collect every last one of these stars, it’s entirely possibly to breeze through the game’s initial 40 stages in well under an hour (or maybe even sooner, if the game’s response times didn’t take so long). 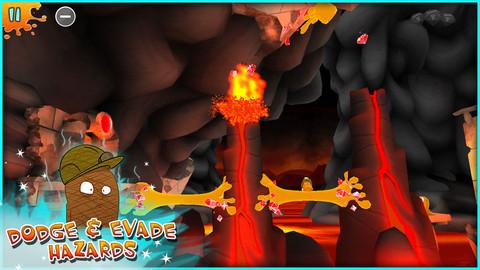 Another huge problem with the Critter Gear comes in the form of the Welk Guard costume, which is given to you free of charge at an early point in the game as a means of introducing players to the whole dress-up mechanic. When players dress their critter in the Welk Guard outfit, they will automatically be able to cross paths with the patrolling guards in the game without being captured and thrown into the screen, resulting in having to start the stage again. Considering how some of the biggest (and sometimes only) obstacles in the early stages come in the form of these guards, any sense of challenge in the game is virtually stripped away right from the onset. The costumes are supposed to be looked at as “cheats,” but their weird and often mandatory placement in the game just leaves Chuck the Muck feeling completely disjointed and at odds with the gamer.

So while Chuck the Muck certainly has a lot of heart, and the game’s 3D visuals are a real gift to the eyes (especially for a casual puzzle-platform game), the restrictive elements to the game deflate these positive strides and leave the overall experience feeling less like a pile of red crystals, and more like the sticky orange muck of the game’s namesake. From slow controls, to bad cameras, to obtrusive costumes, this is one puzzle game that’s probably best left underground in the mines.

Castle: Never Judge a Book by Its Cover Review