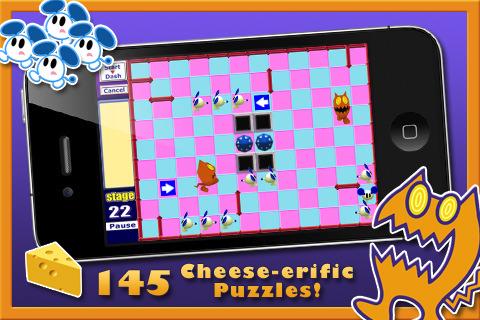 On 9/9/99 the SEGA Dreamcast was released into the world as the cutting edge console of its time. While it was never super successful commercially. it became quite beloved by many people as a console that consistently released weird little niche titles with lots of polish. ChuChu Rocket! was one of those games that we considered a Dreamcast classic, and it just hit the iPhone. Good news, the glory and fun of ChuChu Rocket! hasn’t diminished in the translation at all.

ChuChu Rocket! is a quirky little puzzle game where you put down arrows on a grid to guide your mice (ChuChus) away from swirly-eyed cats (KapuKapus) and towards their spaceships to take off. The cats and mice all move in predictable patterns, moving in a straight line until they hit a wall where they turn right. You can change this behavior by placing arrows on the grid which the animals will follow.

In the Dreamcast version you used the controller to move your selection box around the grid and would then have to press one of your buttons to drop an up, down, left or right arrow down that anything that ran over it would then turn on. It was a simple interface that’s been made even simpler with the addition of the iPhone’s touch screen. Now you just press the box you’d like to change and swipe in the direction you want the arrow to point. Voila mice (and cats) now follow your commands and turn depending on your arrows.

The game has two major modes, puzzle and battle. Battle mode is pretty straightforward and lets you and up to 3 friends (or AI) battle it out over wi-fi on the same map. You’ll all be dropping arrows at the same time to route and re-route cats and mice to try and gain the most points in the time limit. Puzzle mode on the other hand is the single player component and consists of various setups that the game wants you to solve. Some involve just getting all the mice into the ships, while some actually require you to feed a certain number of cats. It’s both challenging and rewarding when you get the solutions down pat and pull them off perfectly.

The one major downside (and one I’m hoping will get patched) is the lack of online multiplayer. Now this could easily be for speed issues, as this isn’t a game that can do anything with push notifications. The multiplayer game is fast and furious, and I’m secretly afraid that it just can’t be done at the speed necessary. Of course all that being said, SEGA did it with Dreamcast’s equipped with 56k modem connections over a decade ago. And other publishers manage to pull of real-time multiplayer without on the iPhone without any problems (see Modern Combat 2: Black Pegasus for a great example of that), so it’s hard to imagine why SEGA would skip the online component here.

With the exception of the multiplayer this is a perfect recreation of the game we know and love, but with an improved interface. The touch screen controls are spot on and are faster and more accurate than the old controller scheme on the consoles. I love that after so much time, ChuChu Rocket! could be relevant and re-born in a new way on a new console. Despite the multiplayer not being internet based, this game is still too close to perfect to pass up.