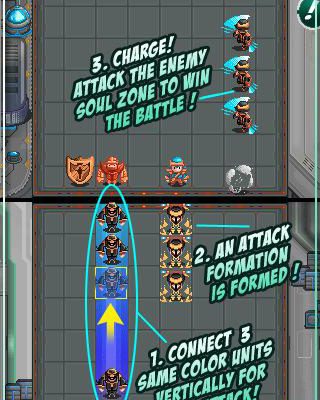 Up until now I’ve never played a match-3 puzzle tactical rpg before, but since I’ve played ChronoSgear I suppose I can scratch that very specific genre off my list. It’s an interesting mash-up of genres that in all honesty shouldn’t work, yet somehow really does. If you’re a fan of match-3 puzzlers or tactical combat games then you’re bound to find something interesting in this totally unique offering.

At its core, ChronoSgear is a match-3 puzzle game that unfolds on a tactical battle grid. You’ll move units around to match them up and then use those combinations to attack your opponent. There are some light RPG elements as well, since winning a battle gives your units experience to level up and get stronger.

The battle grid is divided into 2 sections, your opponent up top and you down the bottom. Your job to to attack your enemy enough to drain their life before they do the same to you. On your turn you get a set number of moves that will be displayed on the screen. You’ll use these moves to shift units around to make offensive and defensive formations, and that’s where the match-puzzle element comes in.

If you line up 3 like units in a vertical line they combine to form one fighting unit that will attack the enemies in front of them on the grid. Should you line up 3 or more horizontally then they combine to form a defensive unit and take on the appearance of shields of other barriers. The best is if you manage to do both in the same move, as this combo grants you a free move. There are other formations you can pull off with special units, but that’s essentially the crux of the game. 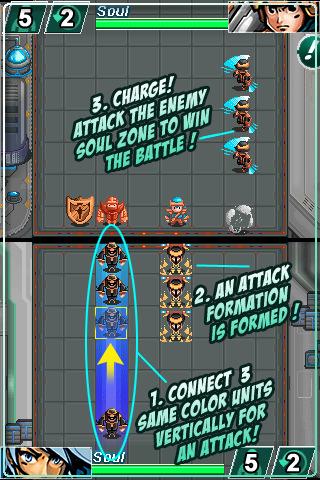 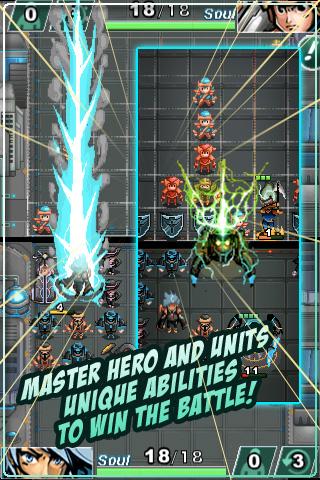 Once you have your formations set up, it takes a few rounds for them to ready their attack. It gives the opponent a chance or two to set up a defense, though often that’s not really feasible. That may sound like a bummer, but you’ll appreciate the chance to nullify your opponents attacks. Once it’s ready, it rolls across the battlefield in a straight line attacking everything in front of it. If it gets through the defense it will move on to attack you (or your enemy), this also happens if there’s an unopposed attack as well. This is how you’ll wear down and beat your opponent.

It’s a delicate balance of offense and defense, of when to delete units and when to call in reinforcements. In the beginning I spent way too much time making offensive formations, but learned pretty quick to spread it out and always spend an action to call in some reinforcements when necessary.

The game has what they call an “epic time-travel storyline,” but what I’d call a typical manga style throwaway plot. It basically involves you and your robotic sidekick working for the mafia to take over rivals, but then you’re betrayed and yadda yadda yadda. Personally I just thought it got in the way of the battles, which is clearly the meat and potatoes of the game. You’ll walk around the overworld, talking to people and getting into random encounters, but most often I was just tapping past the story parts to get back to the action.

With such a weird blend of genres I really didn’t expect ChronoSgear to accomplish what it set out to do. Surprisingly though, it really does find a fun and interesting way to combine all these different elements. While the story is hit or miss, it doesn’t detract from the overall experience of the game in the least. If you like tactical battle games or match-3 puzzlers this one deserves a look.