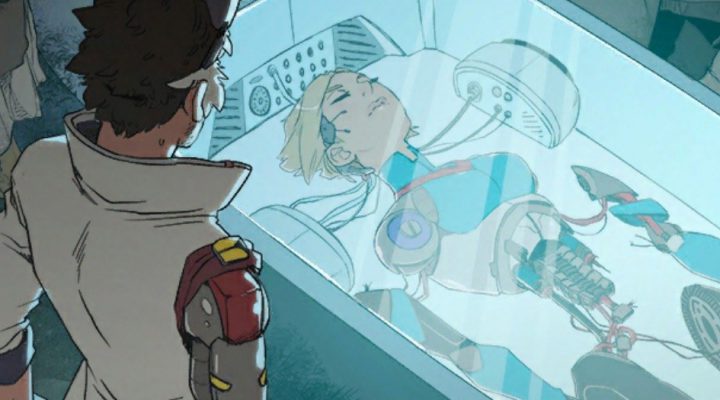 Lots of characters to unlock and upgrade

A decent amount of enemy variety

Slow to really get going

Not as energetic as its obvious inspiration

No way to extend or remove the stamina meter

I’m going to be honest here. Chrono Strike clearly draws most of its inspiration from One Finger Death Punch, which was one of my favorite indie games ever (also one of the few reasons I miss owning an Xbox 360), and I’ve been anxious for a proper OFDP fix for years. The thing is, while I appreciate what Chrono Strike is trying to achieve, it never quite reaches that same level of energy and madcap violence. That sort of comparison might not be entirely fair, and I’ll totally admit that, but it’s also one that’s pretty much unavoidable.

For the unfamiliar, Chrono Strike is basically a simple but tricky wave survival game. The chosen character (there’s just one to start but more can be unlocked through regular progress and level grinding) usually stands in the center of the screen, and hostile enemy robots approach from either side. Tapping the left or right side of the screen once a given enemy is in range will cause the character to attack that enemy, and the overall goal is to make sure none of them ever get close enough to attack. It’s an incredibly simple control scheme to learn, but things get way more complicated with each passing level. 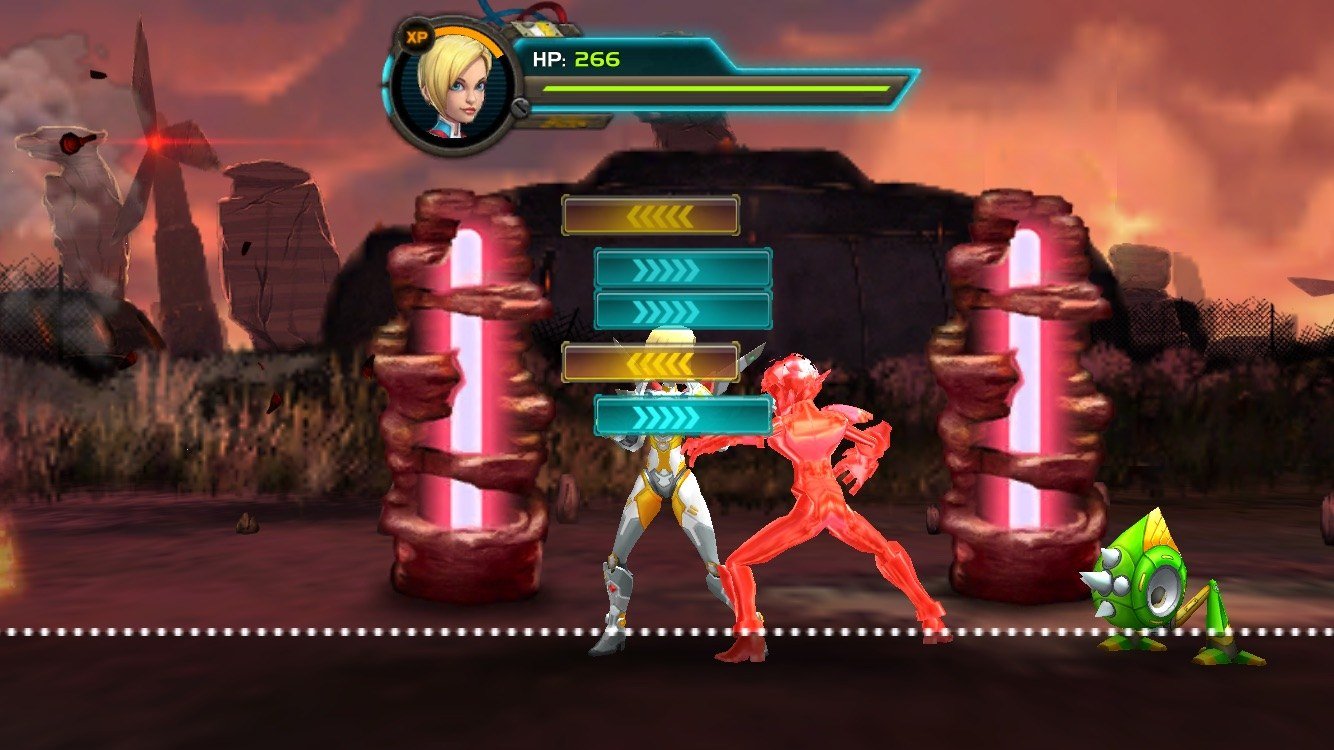 First it’s simply a matter of properly alternating and sometimes doubling-up between left and right taps. Then enemies that require multiple hits are introduced. Then the character will have to run to a goal rather than staying put, with enemies often approaching much faster on one side due to their momentum. Then enemies that will change sides after an attack, requiring a quick left-right or right-left maneuver. It feels great to pull off successful combo chains and mow through wave after wave of enemies with the correct sequence of taps, but it takes a while to find any real challenge.

That’s not to say there isn’t any challenge, of course. Eventually (imagine that word in bold and italics, with an underline and surrounded by layers of asterisks) levels will start to take the training wheels off and present more interesting and varied enemy waves. In addition to that, the better the performance in a level the faster things will start to move in general – so lots of high combos without misses and no damage taken will steadily ramp up the overall speed in subsequent stages. I like this approach, but I do wish things didn’t feel so patronizingly easy in the early bits. 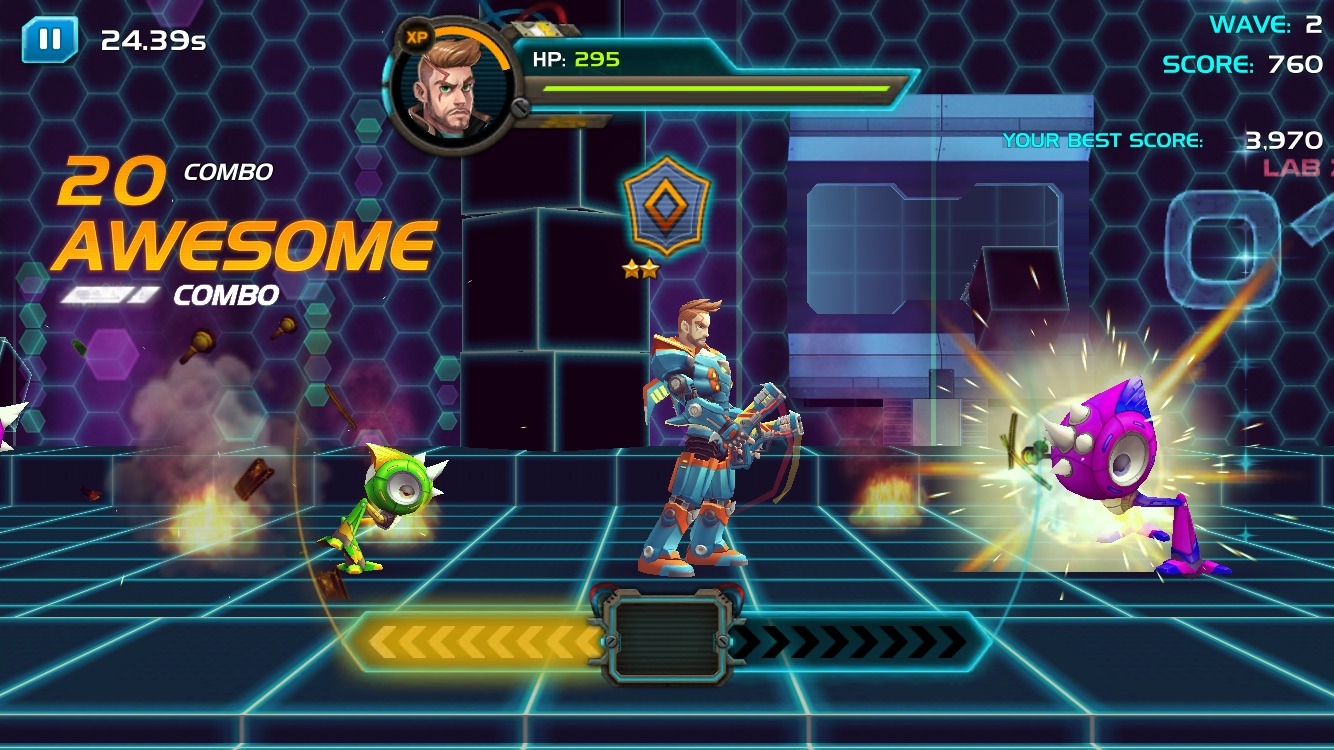 I also greatly appreciate the inclusion of several different playable characters. There are some very slight mechanical differences between them, mostly due to the unique special ability each of them can learn, but even just the cosmetic difference is nice. Then there’s the oodles of upgrades. Each character can be evolved multiple times over to increase their stats (power level, reflexes), has armor that can be upgraded to boost defense (as well as power level and reflexes), and possesses a special ability that raises power level and attack strength – plus there’s the ability itself, which will trigger automatically after enough enemies have been destroyed. Relics that permanently boost every single characters’ stats (once enough pieces have been collected) are also a nice touch.

When it comes to progressing in Chrono Strike, I’m totally okay with the usual free-to-play stuff found throughout (i.e. spend money on premium currency, use premium currency to unlock characters early, etc). What actually bugs me is the stamina meter. Not so much its existence, because as I’ve said it’s a free-to-play game and the developers need to try and make money somehow, but the fact that it sits at a static 10. Completing quests can sometimes earn more energy, as can a character gaining a level, but this just goes towards refilling the bar rather than providing any permanent changes. It’s capped at 10, and that’s always going to be a problem when tackling higher difficulties that require two or three energy for each attempt.

While I’m not a fan of being forced to play in smaller doses, and it’s never quite going to reach the heights of the game that inspired it, Chrono Strike makes for an enjoyable “one punch” style game nonetheless. There’s plenty to do, lots of tricky enemy combinations to fight through (once the difficulty actually gets difficult, anyway), and it’s definitely fun to play. It won’t replace One Finger Death Punch, but it’ll make for a decent enough stand-in.