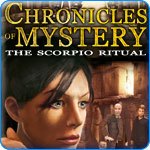 Don’t let it’s deceptively generic title fool, Chronicles of Mystery: The Scorpio Ritual is actually a great example of how to do an adventure game right. The story is rich and interesting, the puzzles are challenging without being frustrating, and the world is beautiful and just begging to be explored. It’s not without it’s faults, and it doesn’t tread any new ground, but The Scorpio Ritual is a solid game that shouldn’t be missed by fans of the genre.

Things kick off when Sylvie Leroux, the protagonist of the story and a budding archaeologist, receives a late night phone call from her uncle. From that point she is quickly swept up into a far-reaching mystery, involving powerful ancient artifacts, religious mysteries, and plenty of codes to crack and puzzles to solve. The whole thing has a very Da Vinci Code feel, and takes Sylvie all over Europe, from Paris to Istanbul and even the Vatican City. And even though it’s not the most original premise, it’s done so well that the lack of originality isn’t much of a bother.

Sylvie herself is a great lead. Despite the precarious circumstances she is forced into, she never plays the damsel in distress, and always keeps a cool, calm demeanor and even offers up the occasional humorous quip. Likewise, the rest of the cast is believable — aside from a certain smart-mouthed parrot — though unfortunately none of the supporting characters are explored with much depth. The great writing is coupled with a solid cast of voice actors and a suitably atmospheric soundtrack.

What makes the world truly come alive though, is the visuals. From the ornate buildings of Vatican City to the dusty Island of Gozo, the different areas of The Scorpio Ritual are all richly detailed and beautifully rendered. This helps to mask the fact that there are actually only a few different places to explore in the game, areas that are all re-visited several times throughout the adventure. What it doesn’t mask though, are the terrible character models, which stick out like a sore thumb when placed against the gorgeous backdrops. The same goes for the brief and infrequent cutscenes that look dated, and suffer from some technical issues – namely the fact that character’s voices don’t sync up with their mouths at all.

The puzzles in an adventure game can be a make or break feature, but thankfully The Scorpio Ritual largely succeeds on this front. The solutions almost always feel organic, and require the player to use the items in their inventory in a logical way. The result is that the puzzles end up being challenging, but aren’t overly frustrating or annoying. But for those instances where you do get stuck, the game features a very subtle, yet helpful, hint system. Sylvie will occasionally "think out loud," giving hints about what to do next. And hitting the "?" button will cause the game to reveal all of the different spots on-screen that can be interacted with. This is a two-edged sword, however. While it helps to eliminate the aggravating "pixel hunting" that tends to plague adventure games, if overused it makes things just a little too easy.

The only real major disappointment is the game’s ending. Throughout the majority of The Scorpio Ritual it feels as if the narrative is building towards an exciting climax, but this never happens. Instead, the final moments of the game consist entirely of a short cut-scene that feels much too abrupt. It’s not clear what actually happens in the end, and there are numerous plot holes that desperately need to be filled.

But when you look at the whole product, these few flaws do little to detract from the experience. Sure, the ending leaves a lot to be desired, but the journey to get to that point is an enjoyable one. The Scorpio Ritual has all the features that a good adventure game should and ties them all together with a great presentation. If the idea of an adventure-bound archaeologist searching for mysterious lost treasures sounds appealing, well, look no further; this game has all that and more. Just don’t expect a great ending.