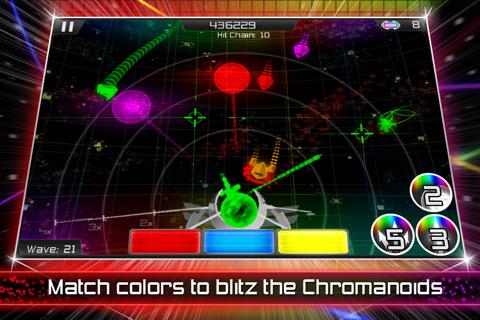 Chromanoids offers a great color-based twist on classic arcade gaming, but insults us by asking for more quarters

Chromanoids manages to be a game that’s really not like anything I’ve ever played before. Sure, it draws inspiration from a few well worn sources, but manages to combine them in a totally unique way. It’s a pretty unique game that I could almost endorse wholeheartedly. Sadly, however, it’s not perfect.

The game has a similar setup to the arcade classic Missile Command. You launch missiles from the bottom of the screen towards enemies flying in from the skies. You’ll tap the screen and a missile will fire off and explode there in a burst. If a bad guy is caught in the burst, it dies and you get points. Every once in a while you get a short rest, and then a new wave will start. Let too many enemies through and it’s game over.

So what makes it different? Well, color. Under your missile launcher you have buttons for Red, Blue and Yellow. You need to match the color of the missile to the color of the enemy, otherwise it will have no effect. This actually reminded me a bit of a game I reviewed a while back called Wispin. It’s a basic game idea with a really unique and fun twist that keeps you on your toes the entire game.

At first you’ll get enemies coming in groups of different colors, so you change then kill a few guys then change, etc. But then you’re constantly changing colors. Then they start second guys with secondary colors (like orange and green) at you and you need to mix your main colors, like blue and yellow to kill a green guy. This is where the game really starts to shine.

There are a bunch of different game modes, but all have that basic setup. Some are harder or faster or have smaller enemies. The all look and sound essentially the same, though with a game that looks this good you won’t mind that one bit. They’re also all exciting and a thrill to play. 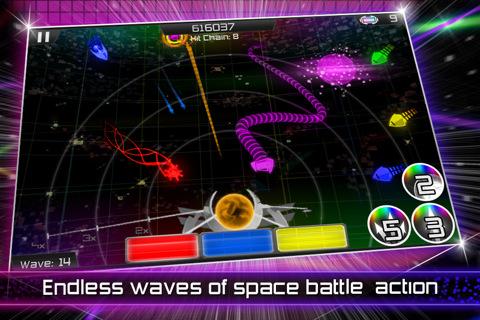 It feels skeevy to me to both charge for the game and have in-app purchases. That’s bad enough, but the items they sell in the store are credits that are required to actually play the game. This goes beyond the normal setup of buying upgrades/special weapons, to the point where if you want to keep playing and enjoying this game you bought, you need to keep forking over money.

It seems like a bit of a rip off to pay up front, then have to continue to pay if you want to keep play the game. You can earn free credits by playing every day, so if you don’t want to play it a bunch in a row you may be ok – but is that the thought process you really want when buying a game?

Really, this is Hothead Games trying to have their cake and eat it too. Charging for apps or making it free with an in-app purchases are both viable options for turning a profit, but combining these two is ambitious at best and insulting at worst. Either way it’s a bad deal for the consumer. Whether or not it’s a deal breaker is up to you. Shame too, because without this stupid blunder I’d have nothing but great things to say about Chromanoids.