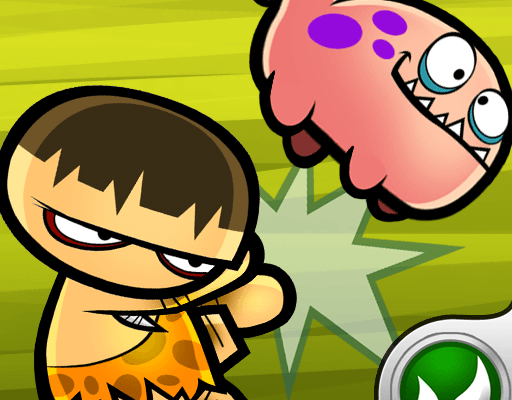 It must have been tough being a caveman. Hot sun, deadly animals, and almost nothing to do to pass the time. No books, no television – nothing. But we humans have always been an inventive bunch, even in our prehistoric days. That’s where Chop Chop Kicker comes in – a game about killing time by giving dinosaurs a swift kick in the butt.

If you’ve ever played a catapult-style game like Toss the Turtle or Kick Buttowski, you’ll definitely recognize the basics that Chop Chop Kicker has to offer. After the caveman kicks a dinosaur, it’s up to the player to keep that dinosaur in the air as long as they can. The further the dinosaur goes, the better your performance.

While many games of this nature rely fairly heavily on luck, Chop Chop Kicker puts more of its focus on skill. Rather than just hoping for a lucky collision with an item that can propel you further, players will be able to guide the flight of the dinosaur using a magic marker. By pressing a finger to the screen, you’ll be able to draw a cheerful rainbow path for the dinosaur to grab on to. This will not only let you try and steer the dinosaur skywards to improve his distance, but it also lets you guide it into the path of special items like chilli peppers that will have you rocket across the screen, or jelly beans that will refill the ink in your magic marker.

But while the gameplay offers an enjoyable skill-based twist on this largely luck-driven genre, there are a few elements here that detracted from the overall experience. Whereas most games would let you control the force and direction of the initial kick, Chop Chop Kicker handles that opening salvo entirely on its own. And while guiding the dinosaur makes up the bulk of fun in this experience, the rainbow has a certain “stickiness” to it that makes the dinosaur follow it to the end rather than jump off at a drawn apex. With a little practice you can create some deeply satisfying Tiny Wings style jumps, but this stickiness makes this harder than it should be.

The game also awards you with coins which you can use to unlock new dinosaurs, backgrounds, and item upgrades. With the exception of the item upgrades though, none of these purchases seem to have any effect on the gameplay. It feels like there was an opportunity here to have different weights or abilities for each dinosaur, or unique items and obstacles in each environment, but what we end up with is really nothing more than a palette swap.

There’s a great deal of fun to be had in Chop Chop Kicker, and Gamerizon’s much-beloved cute and colourful presentation skills are just as stunning as ever – but this is also a case of “what you see is what you get.” If you’re looking for a charming little cannon-style distance game, Chop Chop Kicker delivers more than enough fun to justify the purchase – just don’t expect much of a carrot on a stick when it comes to unlockables.