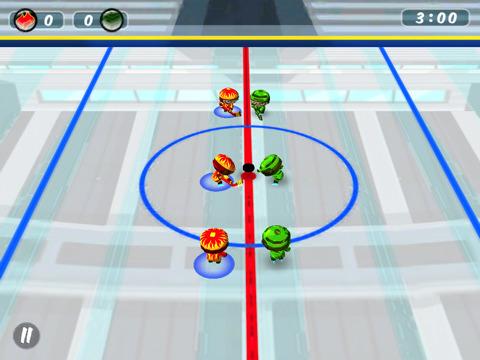 I have a bit of a secret for our readership: I am Canadian. Okay, so you could have found that out from my bio, but there it is. On top of having to leave out the letter “u” when writing reviews (colour is especially hard to give up), I also have a genetic disposition to understanding hockey. And let me tell you, Chop Chop Hockey is definitely the real deal.

The latest in the Chop Chop series (Tennis, Ninja, Soccer, Runner), Chop Chop Hockey is a rock’em sock’em arcade hockey game. An NHL sim this ain’t. There are pretty much no rules here – offside, roughing, cross checking, all out the window. It’s also only three-on-three, making it reminiscent of the classic arcade game NBA Jam.

The players are the same kind of avatars we’ve seen in previous Chop Chop games, with big heads and angry eyes. Each of the four rinks are cutely but beautifully rendered, with crisp 3D graphics around. The audio adds to the hockey arena vibe, with loads of crowd chants, organ tunes and even the awesome “Hey!” song when you score (Rock ‘n Roll Part 2 by Gary Glitter, I’ll have you know!).

There are two modes: single game and tournament. (This is a bit of a misnomer, in that tournaments are simply three games played in a row with the goal of winning a trophy.) You select your team, each of which has ratings for offense, defense and goalie ability. In single game mode you can select your difficulty, length (from two to five minutes) and arena. Should nobody score during regulation time, a big scary “SUDDEN DEATH!” icon pops up letting you know that the first team that scores will win the game.

The computer’s intelligence ranges from incredibly stupid to super-pro. The four difficulty levels will give any player a good challenge. The Pro level for me wasn’t much of a challenge, but I was near blistered against the Legend setting.

There are a number of options, too, in terms of game settings. You can have the camera shoot the action from the side (like a TV broadcast), from behind (like an NHL videogame) or following a player closely, called “action.” All three angles work and force you to change your strategy because of the different perspectives. While you can’t change the cameras on the fly – something that would be really cool, admittedly – you can adjust them in the pause menu to cater to your taste. As you select them the camera swings into view, making it truly dynamic. There are also various language options as well as the ability to mute the music or sound effects. 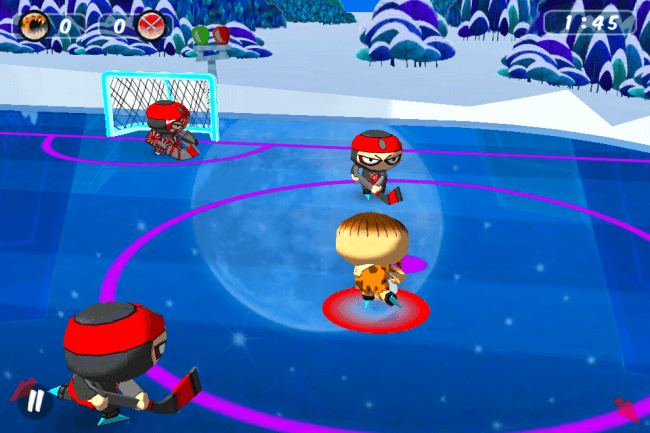 The best part of Chop Chop Hockey is how it plays. Borrowing from the other games in the series, the controls couldn’t be simpler or more intuitive. Everything is controlled by flicking or tapping, from passing to shooting to checking. It’s very fast and easy to understand. There are even helpful tutorials to make things crystal clear.

As you play, there is an undeniable adrenaline rush. The gameplay is fast and fun. Every time you score a goal, the aforementioned “Hey!” song plays, with multiple replays form different camera angles of your goal. Yes, this can be skipped, but goals in hockey – particularly at the higher difficulty levels – are rare events and should be celebrated. It’s really cool that the developers realized this.

The only problem with Chop Chop Hockey is one of depth. Other than the tourneys and single games, there isn’t much else to do. There’s no multiplayer – again, something which would be really cool – or any unlockables that I could find. There are also some framerate issues (the game would slow to a crawl for a second before picking up) which also sometimes affected the control. None of these are particularly game-breaking, but they are noticeable.