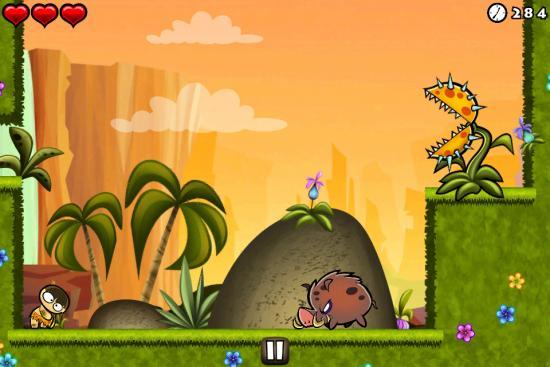 Chop Chop Caveman easily ranks among the best platformers on the iPhone.

Everybody gets hungry from time to time, but where can you go to grab a bite to eat if fire’s only just been invented? That’s the trouble you’ll face in Chop Chop Caveman, the new puzzle platformer from Gamerizon that sends a cute-as-a-button caveman out in search of dinosaur meat.

The sixth game in the Chop Chop series, Chop Chop Caveman returns to the platforming roots of the series debut title Chop Chop Ninja, but trades the brutality of the sword for the ingenuity of a puzzle platformer. That means there’s less action, but if you’re a fan of platformers, you’ll be glad to have the more relaxed pace to explore Caveman‘s brilliantly designed levels.

Unlike Ninja which focussed on action, Caveman is all about traversing the environment. As a result Caveman feels more like a true platformer than anything the series has presented before.

Interacting with the environment makes up the bulk of the gameplay on offer here. Players will have to jump across great chasms, collect objects to throw, and figure out how to open up areas that are otherwise inaccessible. That description might make Chop Chop Caveman sound like it puts the ‘puzzle’ in puzzle platformer, but in all honesty, the puzzling elements here are fairly basic and always a cinch to figure out. For the most part puzzling is limited to throwing objects at breakable sections of platform or dislodging other sections of platform to move them into your reach.

That’s not to say the game isn’t challenging. Clever platform placement and additional objectives in hard to reach spots (big jewels, for instance, or hidden items) manage to keep things exciting from start to finish. The boss fights, too, offer up a deeply satisfying experience. Four times throughout the game (at the end of each world), players will do battle with a boss dinosaur, and each will require a unique strategy to put them down before you can turn them into supper.

Like all games in the Chop Chop series, Chop Chop Caveman boasts a unique one touch control scheme. This means that every action in the game can be completed using only a single finger. Moving to the right, for example, requires players to touch the right side of the screen. Jumping means touching just above where you’d touch to walk. You can tap dinosaurs to attack them, tap objects to butt slam them down from their perch, and swipe your finger to throw an object you’re carrying. With such a simple control scheme in place, Chop Chop Caveman ensures that its gameplay remains accessible to every level of player. 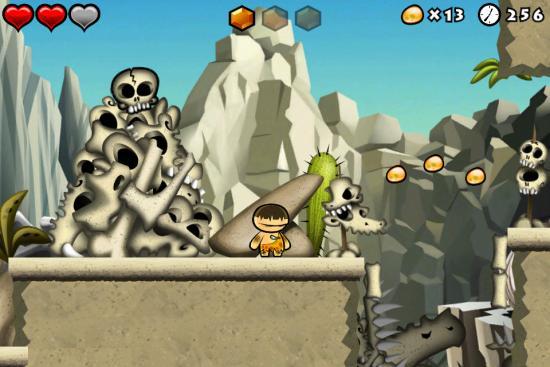 The one touch controls, however, aren’t without their hang-ups. Controlling everything with only a single tap of the finger may be a Chop Chop mainstay, but in a game where precision and timing are essential, the weaknesses in this control scheme start to become apparent. On more than one occasion we would find ourselves walking into a chasm when we intended to jump, or throwing an object at a dinosaur when we needed it for a puzzle. Issues like this weren’t a regular occurrence, but when they did happen they were accompanied by the requisite amount of frustration on our part.

While the controls may be similar to those found in Chop Chop Ninja, the frantic button-mashing pace of Gamerizon’s earlier effort made it much easier to overlook these little wriggles in the design. Since Chop Chop Caveman demands much greater finesse from its players, the flaws become much more apparent when they crop up here.

Still – it’s easy to overlook the occasional misplaced tap when the core of the game is so much fun. Truly great platformers have been few and far between on the iPhone, so when something like Chop Chop Caveman comes along it becomes all the more special. Combining great level design with challenging boss fights and a ton of personality, Chop Chop Caveman easily ranks among the best platformers on the iPhone.