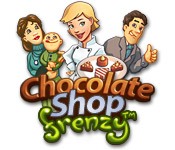 Digital Chocolate’s Chocolate Shop Frenzy is a highly simplified time management game well-suited to the iPhone perhaps, but light on features and details when compared to existing counter service titles like Cakemania or Turbo Subs.

Many time management games offer little more in the way of story than “Plucky young woman starts a business while menaced by giant corporation bad guy. Quality wins out.” Chocolate Shop Frenzy has the same plot, as Emma, a young chocolate maker, attempts to compete with the Giant Cheap Chocolate Company. The game follows her through a year of business, although there are only 3 levels per month.

Released for both the iPhone and computers, the game has been stripped of much of the choice and complexity of a typical time management title. You do get chain bonuses for doing the same thing multiple times in a row, but you can’t queue clicks ahead of time. Everything is done with a single left click, probably to provide the same gameplay as the iPhone touch screen. There’s no choice in add-ons like ovens or gift-wrap machines—they just appear automatically from time to time.

Every level looks just the same—the machines are in the same place and do the same things, although occasionally a new machine is added. There’s no player choice for décor or costumes. There are several types of customers, but the only real variation is how quickly they become impatient and how much they tip. They don’t interact with each other. And although you track progress on a calendar, there are no changes in the weather or items sold.

The main tasks are identical to Cakemania. Hand out menus, make the basic item, add frosting if requested, deliver to customer, pick up money from counter. There’s a treat machine that lets you give out extra treats to keep customers happy. There’s also a hot chocolate machine where you can make a power-up drink for yourself.

Customer types are also similar to other games: brides, police officers, businessmen, kids. There’s no ethnic diversity. Graphics are good, but not very creative. The music and sound cues are ordinary at best.

There’s one mini-game that repeats every 3 levels. It’s a simple and fairly slow match-3. Although it says the purpose of the mini-game is to create new recipes, the ingredients on the match-3 grid have nothing to do with the new item you end up creating. By the time you’ve gotten through the first half of the game, the new items are the same ones you already have, but “with improved taste.” The mouse controls are a bit draggy for the mini-game, which may have to do with designing it to be suitable for the iPhone.

All of this ordinariness doesn’t mean that gameplay is completely boring, though. There’s a lot of randomness in what people order, whether the phone rings or not and whether or not Turbo Subs-type thieves show up to steal the money on the counter. The game is quite easy to beat at the minimum target level, but challenging if you want to make Expert. So replayability is strong, which means the shortness of the story mode may not matter as much. It’s true that it offers only 36 levels while most games of this type have 60 or more. But it’s clearly designed to play just a few levels at a time, with a lot of repeats to try and get higher scores.

While both Sally’s Salon and the original Diner Dash are already popular time management titles for the iPhone, the simplicity of this game may make it an even better choice for first-time time management players, particularly on a very small screen.

If you prefer a time management game with multiple strategy choices and elegant or amusing detail, you won’t find much of interest here. But if you’re looking for a simplified game that tests your reflexes and can be played in short bursts, you may find Chocolate Shop Frenzy a lot of fun.