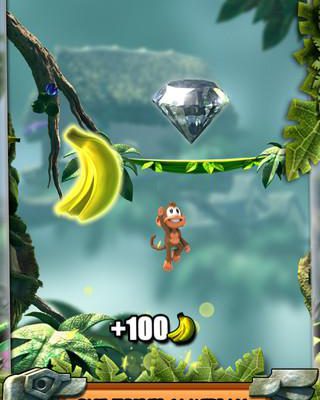 Chillingo clearly doesn’t know how do what the first half of their company name suggests. They just keep pushing out titles! Luckily for the App Store and the iOS gamer market, they tend to be quite good – if at times a little par for the current formula. Despite their dedication to producing hit after hit, however, their latest game (the first from studio Yippee! Entertainment) suggests that they may be up for some monkey business. Chimpact is the latest banana from Chillingo’s bunch to make it to market. The only question is: do we pick this one, or let it rot in the heap?

Chimpact puts players in the shoes–or hairy feet–of Chuck the chimp. Chuck has two things that he desires: bananas and gems. Why gems, you may ask? Why not, I say. While the main campaign of Chimpact has you chasing for the previously mentioned temptations, there are also plenty of little mini-games that add some more branches for this game to hang its monkey on. There are races against time, obstacle courses, and other activities that will have you flinging your monkey around a-plenty.

Speaking of which, you’ll need exactly one finger to play this game, and that single digit will be performing a slight variation of the exact same move: pull back and release. It’s pretty clear from this, as well as the cartoony style of the animations and bare bones challenge to the levels, that Chimpact is a game perfectly suited for the younger set. There’s nothing wrong with this, and odds are good that the game will thrive in that market. I could see handing this game off to a child and receiving a few hours of peace in return. That doesn’t make the gameplay any less monotonous at times, though. 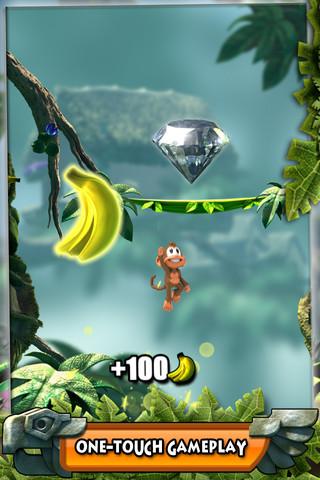 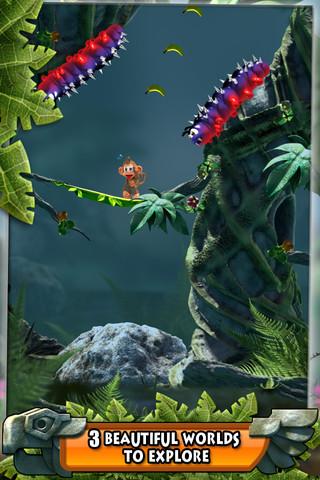 While the game’s concept and controls are very rote, there is some really well done level design here. There are secret holes in the trees that act as slides to move Chuck around to different parts of the level, and the layout is clearly thought out, as you’ll hit a particular spot and watch as trees fall and create an entirely new landscape for you to navigate. With all the gems hidden throughout, it’s definitely worth exploring every angle and launching yourself at everything that looks remotely movable to make sure you don’t miss anything–even if that means giving Chuck a few extra lumps on the head in the process.

Maybe the biggest appeal of Chimpact, at least for us nostalgic gamers, is the undeniable resemblance to the old Donkey Kong Country games on the Super Nintendo. The art direction is a direct playbook out of the old Rare Ltd. hit series, with vibrant and detailed 2D graphics that pop amid 3D elements. Even one of the characters that cheers on Chuck looks like Cranky Kong! It’s tough to distinguish if it’s homage or the slightly more sinister “cloning,” but the gameplay differences have my vote cast for friendly nod. If there’s one thing it would have been nice for Chimpact to copy as well, though, it’s a smooth camera. There are moments – especially in the time trials – where the screen doesn’t move as fast as the monkey, costing you precious seconds as you wait to see where to line up your next shot. 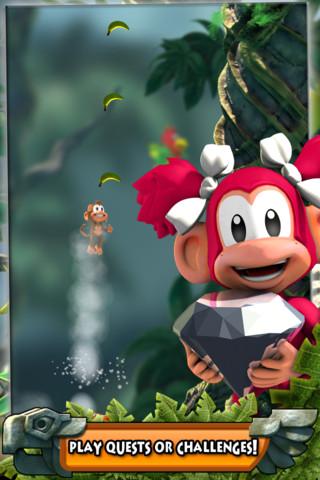 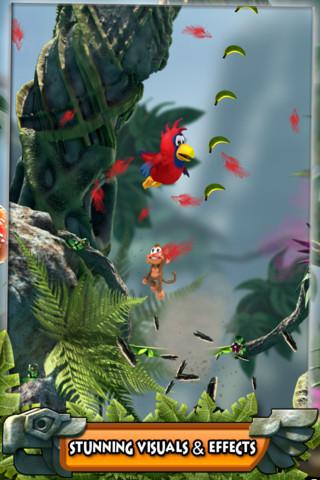 Ultimately, If there’s one thing working against Chimpact, it’s just how simple it is. The game gets repetitive after a while, and even with different game modes, it never feels different enough to keep me coming back in my moments of mobile addiction. This is definitely a title that would get extended play from kids, though, making it a worthwhile distraction for adults with little ones to keep busy – or those in love with fast-flinging chicanery. At the very least, it’s more fun than a barr– no. Not even I can finish that one.