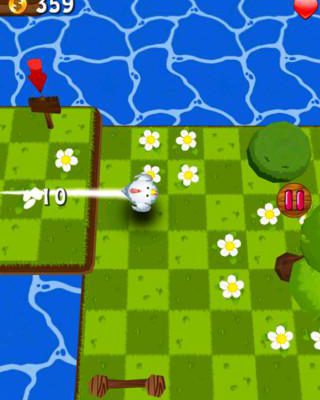 Simple games are abundant on the iOS platform, but sometimes they just seem too simple. Should they become deeper and more challenging as time goes on, many wait far too long to do so, and boredom sets in. Chicken Rescue is a new game from Ayopa Games that is one such example of this. Best described as a platforming-collection type of game, players attempt to find and rescue their chicks, whilst achieving as high a score as possible.

So Mama Chicken has had her baby chicks stolen, and now they are scattered about the world. In Super Monkey Ball sort of fashion, players of Chicken Rescue must guide Mama around 24 grid-like levels in order to find them and return them back to the chicken coop. The idea is to do so without falling off the edge of the map and splashing down into the drink below.

Everything is controlled by either the iDevice’s accelerometer or through a digital analog stick. Unfortunately the controls are sticky and clumsy, making it difficult to move Mama Chicken with much precision. That said, the accelerometer’s tilt controls do work slightly better. Regardless, control becomes the biggest frustration with the game, as once levels begin progressing, it becomes increasingly easy to fail.

By default, players have only one health. Should they fall into the water or touch certain objects (e.g. a cactus), they “become injured” and must often restart at the beginning of the stage. They do have an option to pay some in-game coin to start at a checkpoint, but it is no less obnoxious. What makes this “platforming” element tricky (and yes, there is moderate jumping between platforms) is the fact that Mama tends to bounce off of everything she touches. Couple this with clunky controls, and it becomes a series of accidental deaths and restarts.

These bouncy objects are not always static either. Eventually players will end up dealing with extra rubbery pigs that move, obstacles that must be dashed through to break, and ramps (that don’t always work when using the digital analog stick).

To mitigate some of the irritation, players can earn a higher score per level by collecting flowers in sequence and rescuing more chicks than is required to complete the stage. This earns up to three stars as a rating, and in turn, earns more coins. These are then used to upgrade Mama with stats such as extra health (even with more than one health, falling or touching certain objects will send the player back to the last checkpoint), point scoring boosts, or a better dash. Coins can also be used to unlock new chicken skins that will also enhance Mama. For example, the “Ninja” skin can increase the chance that coins are earned when running into an enemy. 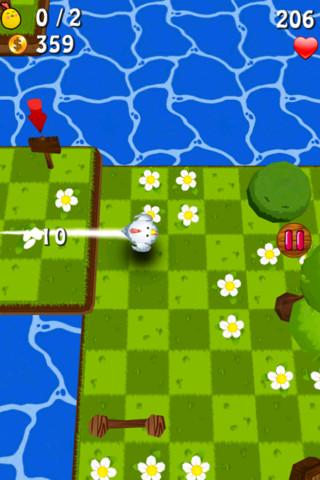 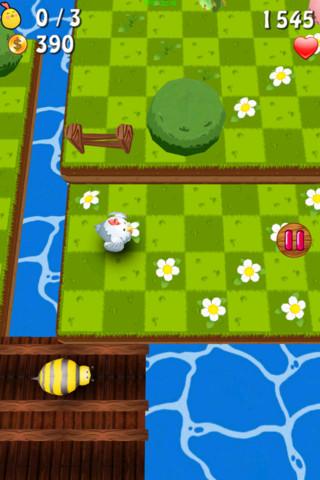 Ultimately though, Chicken Rescue is going to be rather boring to most people. Even without the control issues, most of the play consists of running around collecting things. That said, it feels much more oriented for a younger, children’s audience and should that be the case, it isn’t too bad; at least from a design premise point-of-view. For kids, a simple collection element is just fine.

Unfortunately the game can’t be looked at from just a design point-of-view, and it cannot be overlooked that the app still has a slew of issues. Not only do the controls handle poorly, but it is compounded by the fact that it causes unintentional failures and the restarting of a large portion of a level. It is one thing to fail and restart at a checkpoint because a game is hard. It’s another entirely to have to restart because it doesn’t work the way it should. Beyond this, there are a lot of dull moments where the pacing screeches to a halt while players wait for enemies to slowly patrol out of the way.

All that in mind, Chicken Rescue is a game that still needs some fixes to truly be enjoyable. Once controls work better, much of the frustration and perhaps even the slow pacing moments (as better control means players can move more quickly) will likely dissolve. Even then, though, the design is incredibly simplistic and is going to be exceedingly boring to most individuals.