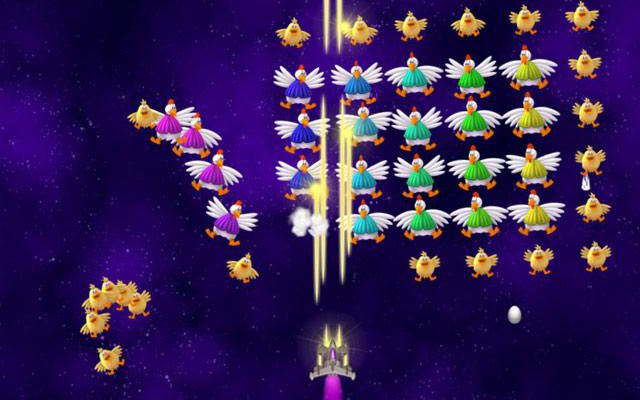 With entertaining shooter action throughout, Ultimate Omelette is definitely a good egg.

The Chicken Invaders series has always been a good source of protein… and entertainment. Blasting feathered fiends in space needs a silly storyline to go along with it, and Chicken Invaders has always delivered in this aspect. The fourth release, subtitled Ultimate Omelette, continues the wacky tradition, providing the most challenging and bizarre shooting action in the series so far.

The joke perhaps feels a little strung out by now, and the gameplay barely differs from previous titles, but that doesn’t stop Ultimate Omelette from being plenty of addictive fast-paced fun. 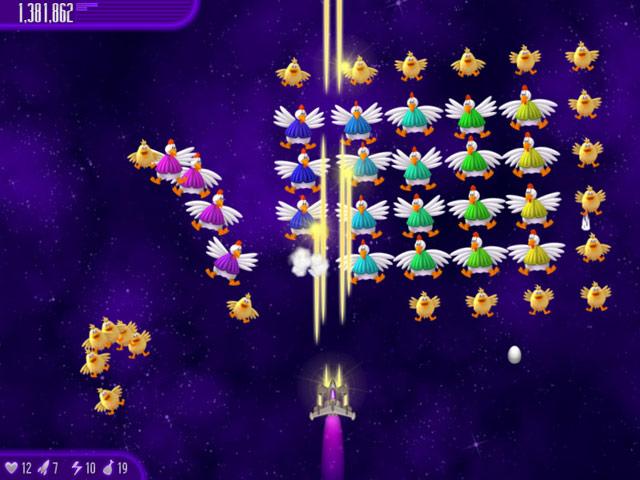 Chicken Invaders 4 continues on from where the story left off in number three, although it isn’t necessary to play the rest of the series to fully appreciate this latest release. Our hero is about to order a large portion of chicken from his local Space Burger drive-thru, when a mysterious ship appears from a nearby portal and tells of an incoming chicken invasion.

The chickens have built a huge Egg Cannon which can be used to fire eggs at planets, covering them in yolk and egg white which then fries in the heat of the sun. Players must chase down the terrible machine through multiple waves of dangerous poultry, dodging egg bombs and swooping birds of doom.

Ultimate Omelette is genuinely humorous, make no mistake. Dialogue is told through speech bubbles and Star Wars-inspired cutscenes, and while the story is rather throwaway, there are plenty of great lines to quote back to friends. The enemy characters are often a great laugh too, ranging from chicks riding in UFOs to hens firing huge laser beams.

Gameplay is your standard shoot ’em up affair, with enemies swooping around the screen, and players tasked with dodging incoming fire and blasting them all down to proceed. Chickens will drop a variety of power-ups for your laser, money for high scores and chicken pieces for special bombs. Darting around collecting the fallout is a game in itself. 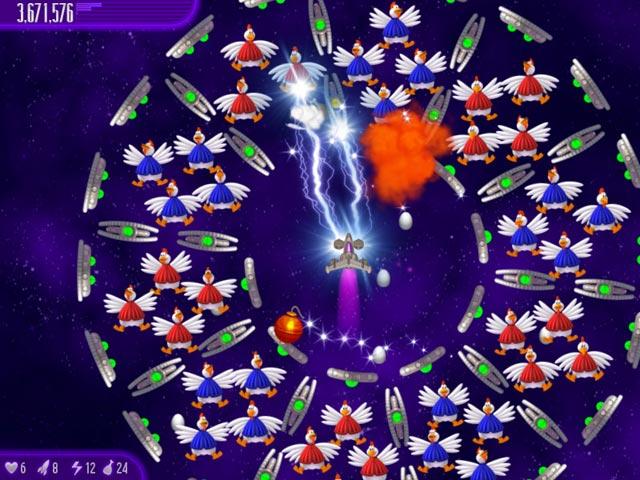 There are just over half a dozen different weapons to try out, some more useful than others. Experimenting with the different firepower is really enjoyable, although you’ll most likely end up sticking to one particular weapon that you find the most pleasing.

Note that you cannot simply hold the fire button down and fill the screen with bullets, as your gun will overheat if you use it too often – balancing your weapon use gives the game a real tactical feel.

Two different control methods are available – either using your mouse or your keyboard – and we found that, while the keyboard is the classic weapon of choice, Ultimate Omelette is far easier with mouse control, especially when you take all the falling debris into consideration. With so much going hard, it can be difficult to get out of the way in time using the keyboard, plus it doesn’t always feel so responsive.

Chicken Invaders 4 is fantastic for a first-timer to the series, but for veterans of the games, it will feel a little too samey. The action has improved somewhat over the course of the series, but it’s still really the same ideas and premise that ran through the other games. Hence, those who are not new to the games may feel that paying full price for this latest release is a little too much.

Having said that, there’s plenty to see and do in Chicken Invaders 4, from collecting medals to unlock a host of secret features. For an entertaining and hilarious romp through space, Ultimate Omelette will definitely provide the goods on a silver platter.