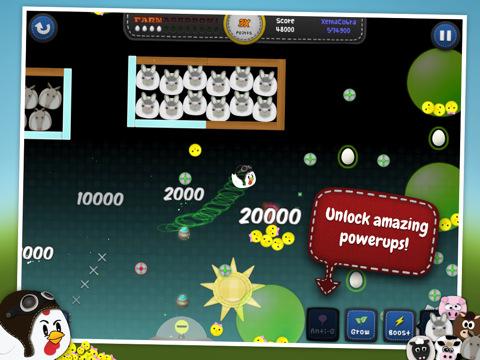 Chicken Balls HD is a mashup of Angry Birds and Peggle, but lacks the fun of the game’s it’s copycatting

I can’t figure out if Chicken Balls is either a brilliant or unfortunate title for a game. I’m learning toward unfortunate, I can’t imagine people are eager to tell their friends how they’re playing with something called Chicken Balls. You might be able to get away with it if the game is incredible, but when it’s just ok… well, Chicken Balls may be a hard sell. Every time I mention it in this review and try not to apply it to some weird double enterdre – it’s harder than you think.

Chicken Balls aims to combine to veritable casual game classics Angry Birds and Peggle. In case you don’t know, Angry Birds has you shooting birds at various angles and speeds to try and knock over structures, while Peggle has you firing little balls into pegs trying to hit those of a certain color and is a little like pachinko. So here you’ll be firing birds into structures and pegs trying to hit certain targets.

For the most part these two elements come together pretty well. Never great, but pretty ok. The problem is that both of those premises work great on their own, but that doesn’t necessarily mean they’ll work well together. While playing I kept going back to “I wish I didn’t have to worry about this structure and could focus on getting around the pegs” to wishing the exact opposite. Never once did I think the game was more fun because both elements were on screen at once.

The biggest issue with Chicken Balls though, is the physics of it all. In Angry Birds, items in the world feel like they have real weight to them and break and fall over like you kind of expect them too. Here everything just feels too matter of fact, like gravity isn’t really a factor. It’s one of the reasons Angry Birds is so compelling Game physics isn’t something we can see, but rather feel. The “feel” of Chicken Balls simply isn’t there.

I certainly had a good amount of fun playing the game, but that fun was always tempered by moment of frustration when my shot would bounce off a peg at a weird angle or just suddenly fly off into space. It just seemed all too often that things weren’t taking natural bounces, and that I was kind of fighting against the game in a way. 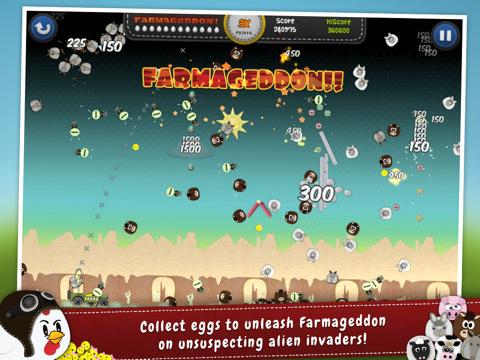 My other issue was one of UI, and it caused me to restart many a level. In Chicken Balls you hit a button to load your next bird into the sling, and tapping it makes your last shot disappear. The button is in the lower left hand corner, right next to the sling. Many, many times I’d fire off my shot then go to tap the screen to make it boost (like the yellow bird in Angry Birds), but my finger was too close to the reload button since you finger ends on top of it when you pull back the sling. It’s like losing a turn from bad layout design. Put that button ANYWHERE else on the screen.

I spent a lot of time comparing the game to Angry Birds and Peggle, and it’s really impossible not to. Chicken Balls isn’t a game that’s inspired by those games so much as it is a blatant attempt to mash those games together. When you come so close to the source material, it’s just par for the course for the comparisons to be made. Because of that, Chicken Balls falls short. While it’s kind of fun, it’s nowhere near the games it’s basing itself on.