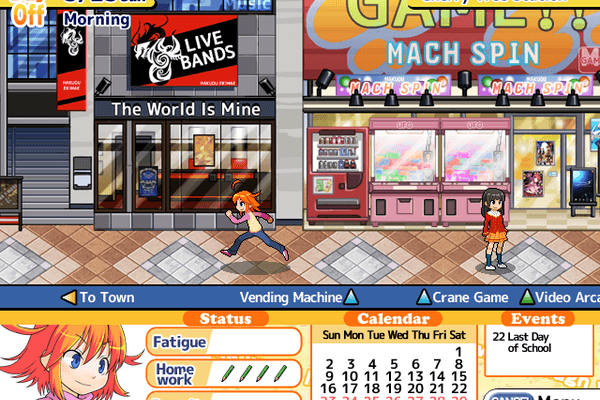 If you’re a fan of adventure games, consider becoming a proud member of the Cherry Tree High Comedy Club

During your school career, you probably joined a lame-o club or two. Maybe it was a dilapidated ping-pong club. Or an anime club that owned one mouse-nibbled VHS of Fist of the North Star. Or maybe your club had something to do with mailboxes from around the world. Cherry Tree High Comedy Club is an adventure game that challenges you to recruit members into a high school comedy club. Video games typically ask you to slay monsters or venture into the darkest parts of your psyche, but putting together a high school club that doesn’t suck? Whew! Talk about an unachievable goal. 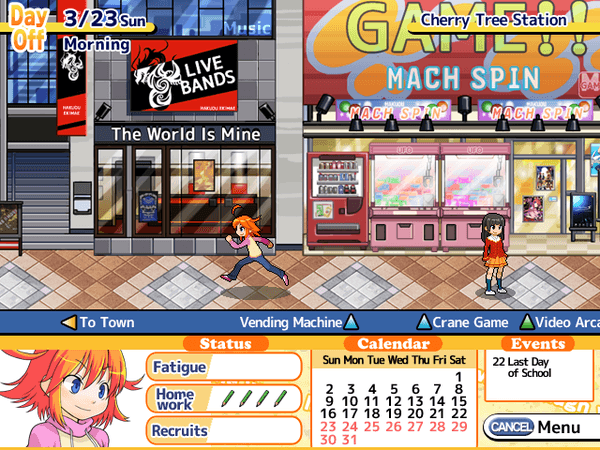 Cherry Tree High Comedy Club casts you as Miley Verisse, a tousle-haired high schooler with a wry sense of humor and a burning desire to revive her high school’s dormant comedy club. Miley’s rival, the president of the student council, sticks her with an ultimatum: if Miley can’t recruit three members into the club by the end of April, then Miley’s dream is finito.

There are several people that you can recruit, though even getting three to join you is a hefty challenge. You have about six weeks to accomplish your goal, but time moves very quickly in Cherry Tree High. Every game day is divided into Morning, Afternoon, and Evening, and each task you perform takes up one part of a day. That includes “Hanging Out” with prospective club members (which brings you closer to them), talking on the phone with pals (likewise), and reading books, magazines, and watching television to make yourself aware of what’s going on in the world (thus giving you topics to chat about with your hopeful recruits).

If you get close enough to an acquaintance, he or she just may warm up to Miley’s comedy club idea. One down, two to go.

Thing is, Cherry Tree High isn’t merely about schmoozing. Miley needs to balance her social life with homework, and she also needs to work odd jobs so that she can afford the books and movies that will keep her up-to-date with her friends. If Miley gets overworked, she risks collapsing. 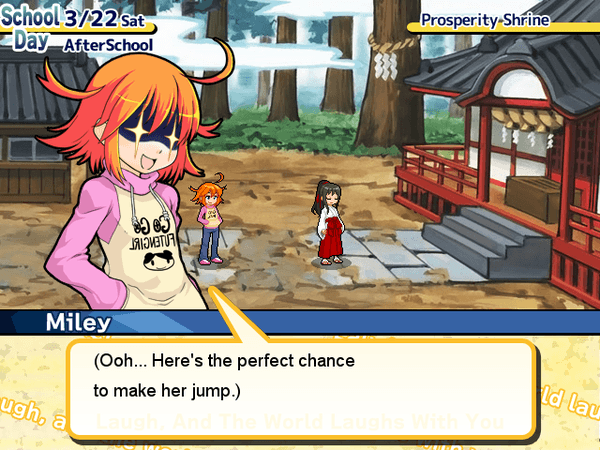 Text-heavy adventure games like Cherry Tree High don’t make their way to American shores all that often, but they serve a very dedicated niche. Members of that niche will have a good time getting to know Miley and her pals, whereas less patient players will wonder where the action is. To be frank, there’s very little action of any kind in Cherry Tree High: You read, you select relevant commands, and that’s about it. If that doesn’t sound like fun to you, run the other way.

On the other hand, if you enjoy Nintendo DS fare like 999: Nine Hours, Nine Persons, Nine Doors, or even the Phoenix Wright games, you should warm up to Cherry Tree High. One thing to bear in mind is that the game’s dialogue and characters aren’t as fleshed-out, funny, or intriguing as what you’d find in either of the aforementioned games, though it’s not without its charms (Miley’s sardonic chain-smoking dorm manager is tops).

Cherry Tree High Comedy Club isn’t like a visit to an actual comedy club: you won’t bellow out loud with belly-laughs, but playing through the game will definitely earn you a chuckle or two. That is, unless you don’t like adventure games. If that’s the case, go ahead and give Miley and her club the cold shoulder.