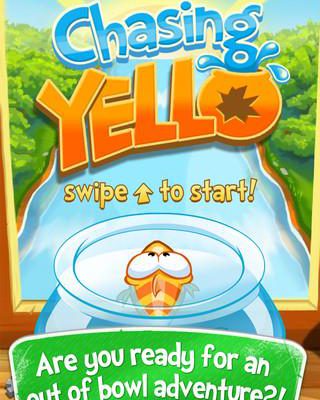 A fine catch… but it may not stay fresh for too long.

I remember owning my first goldfish. I named him Zack, after one of the Power Rangers (naturally). He was my parents’ way of teaching me the responsibility of caring for something on a daily basis, and helping me cope with the idea of loss. Oh, how we’d play. Me, running alongside the river bank chasing Zack. Him, diving in and out of the water, avoiding piranhas, ducking under burning logs. Pop Quiz: one half of this paragraph is about the game Chasing Yello.

If you guessed the second half, you’re dead wrong. Chasing Yello is a sombre interactive novels about the heart-wrenching early experience of — okay, fine, you were right! The follow up to developer Dreamfab’s Saving Yello, this next entry takes the form of an endless runner (endless swimmer?).But to be completely fair about my jokes, the game comes packed with some sinister undertones.

In Saving Yello you were flinging our poor poisson protagonist back into his bowl as a result of his owner Mathilda’s proclivity for, you know…leaving him on the ground. Here again the seven-year-old sadist is back, this time kicking off the game by innocently cooing “we’re going to have fish for dinner!” Understandably, Yello draws a line in the sand, and flees his bowl and house altogether to swim downstream to freedom – all the while being chased (get it!?) by Mathilda.

On the surface, what ensues is essentially Temple Run meets Jetpack Joyride: a swipe-and-tilt controlled runner given structure by a series of meta-missions that allow you to level up, earn more currency, and snag a host of power-ups to keep Yello one step ahead of the frying pan. And for those who’ve yet to make the leap into the other two titles (please, tell me all about the rock you live under), or those who love the genre, Chasing Yello delivers quite solidly. 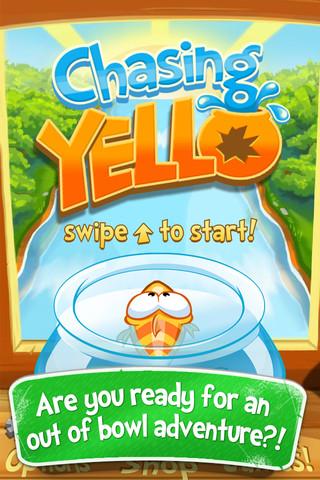 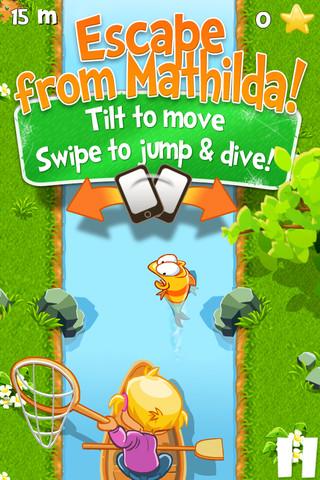 Foremost, the level design and mechanics gel really well, managing to give you the feeling of going on a fast paced aquatic adventure. The infinite waters (don’t tell poor Yello) are peppered not only with rocks to dive over and burning logs to swim under, but angry piranhas, Mario Kart-like boosts, and even Mathilda herself – armed with a net.

The end result is a playing field that makes the control scheme feel less like a gimmick and more like a strong platform to test your reflexes and concentration. Losses never felt unfair, and when they did, it was in that satisfyingly frustrating way where I wanted to dive right back in. Oh, the puns! The humanity!

Meanwhile, the miniature achievement system lifts its weight, turning endless runs into runs dedicated to snagging fifteen stars in a row, or avoiding stars altogether for 150 meters. This proves especially good when you’re interested in booting up the game for a short bus ride or a wait in line, as it offers an alternative to… you know… playing endlessly.

And yet, in what might seem like an unfair criticism to lobby its way, Chasing Yello ultimately felt to me like the straw that broke the camel’s back of unoriginality. Everything works well enough, to be certain, and lacks no level of polish. I even enjoy some of the subtle social features, like the way your starting flag notifies you not only of your best time, but at what rank you sit among your Gamecenter friends. Smart, unobtrusive stuff. But at its core, we’ve seen this before.

With Jetpack Joyride and Temple Run, we saw huge innovation in the endless runner space both in terms of the addition of meta-missions and the rethinking of how they might be controlled. Since then, the App Store has played host not only to a torrent of outright clones, but games looking to trade in on the success of those various formulas with their own brand or skin (Sea Stars, I’m looking at you!). And there would be nothing wrong with Chasing Yello joining the pack, if it weren’t so entirely… run of the mill. 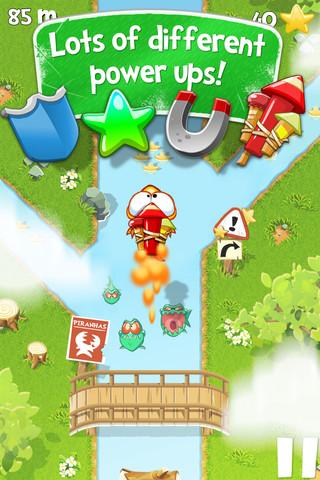 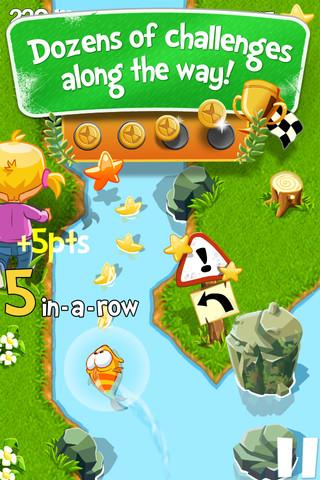 Outside the elements you’re already seeing in Halfbrick and Imangi’s hits, the only differentiators Dreamfab bring to the table are things I’d call distinct negatives. Mathilda’s grating voice interjects frequently at the beginning of each match, pops in throughout, and pokes in to finish it off, repeating ad nauseum purported cutesy-isms like “Yello! I just want to play!” And while subtle, the game’s hunger for your wallet feels measurably greater than in the other two famous runners, as more than a few objects are tied to purchasing content – all of which is just expensive enough that you feel stalled until grinding a handful more Mathilda-filled sessions.

When we reviewed Saving Yello, we said that that it “doesn’t really do anything new or exciting as a physics puzzler. That said, what it does, it does very well.” The same is ultimately true of Chasing Yello. Unfortunately, the App Store’s become a mighty full marketplace. And “nothing new or exciting” doesn’t quite cut it for me anymore.