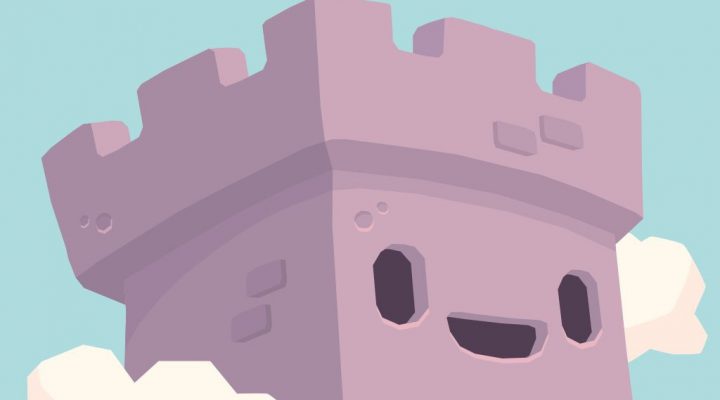 You can tell a lot of thought went into the story, shops and charmers included in the game.

Challenges old prejudices without any discomfort.

Become a billionaire in less than an hour!

A repetitive and unoriginal soundtrack means it's better played on silent.

Perhaps it's a little too addicting.

We all know the fairy-tale basics: a princess or beautiful damsel finds herself in some sort of calamity and despite being smart, resilient, and strong she ends up waiting around for some charming prince to come rescue her. After hundreds of years, these stories are more than a little stale and Charming Keep by Mighty Games is a welcome attempt at flipping this script on its head.

In this punny casual clicker game, you’re charged with fundraising for charming princes who find themselves out of their depth and in need of a rescue – because looks can only get you so far in life. 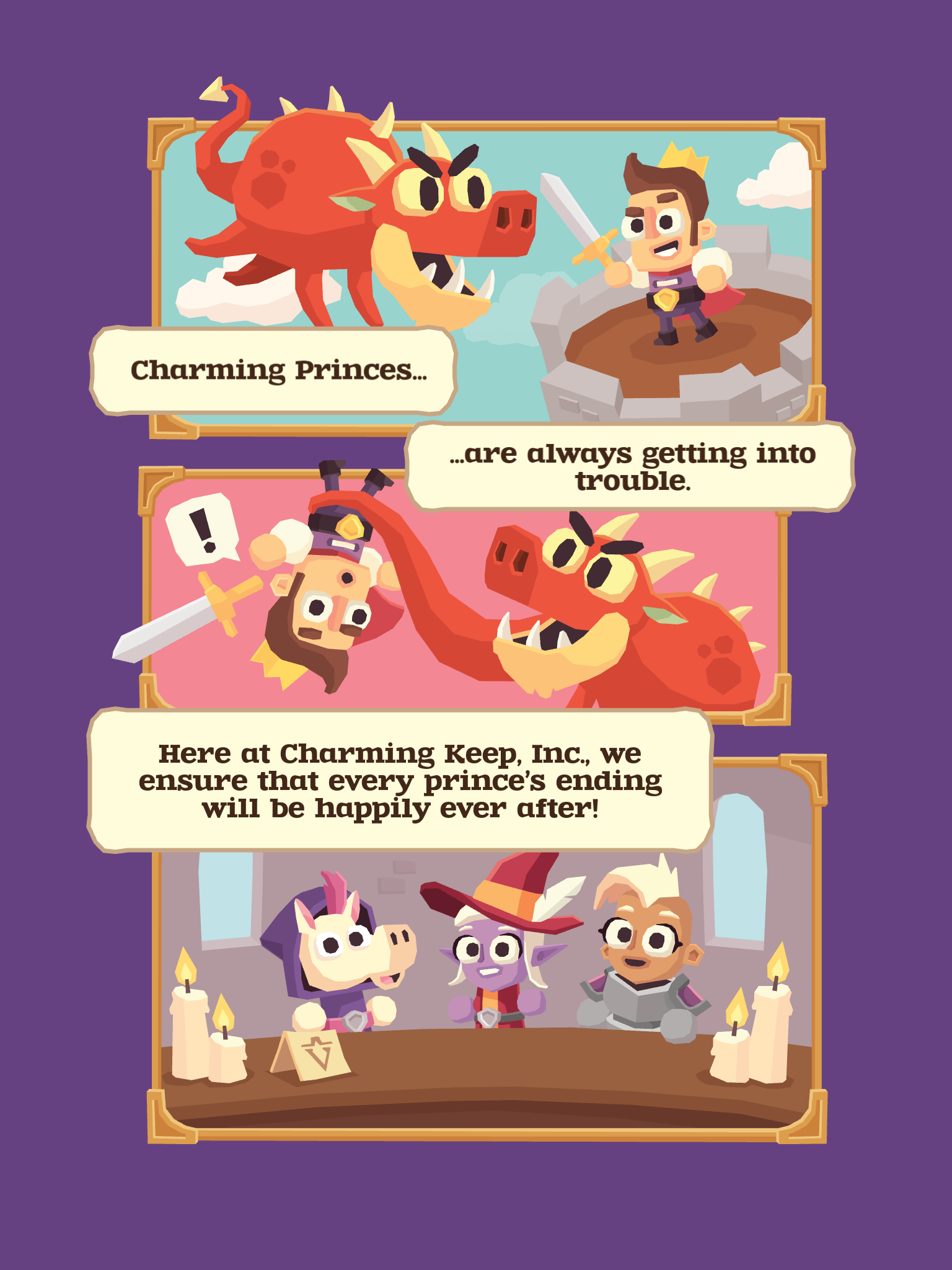 Search and rescue missions don’t come cheap, so it’s not a bake sale you’re running but a full business conglomerate. The goal is to build as many stores as possible, selling a variety of products across multiple sites, in order to have a diverse portfolio capable of weathering any storm. You’re also completing quests for bonuses along the way. At this pace, it doesn’t take long before you start to gain a new appreciation for the importance of women on the Homefront during World War Two – bringing the fellas home sure takes a lot of work!

Charming Keep relies on a heady mix of immediate gratification and rewards for patience (and ad viewing) that make it incredibly addictive (so you might want to wait until you can lose a couple hours before installing). The graphics are fun and welcoming, though some players more sensitive to affronts to their macho-masculinity might find them a bit soft. The adorable shopkeeps, called charmers, comprise the most diverse workforce you will ever see, each with their own advantages from which you’ll have to choose carefully. They will grow to be more than mere employees, but trusted allies who will do most of the legwork for you as you build your rescue-focused social enterprise empire.

Even with an army of friendly charmers, there’s still a lot of decisions to be made and clicking to be done. From deciding which shops to level up (through the addition of charms) to making extra cash by clicking on the fluffy animals at the bottom of the screen, there’s always something for you to do. 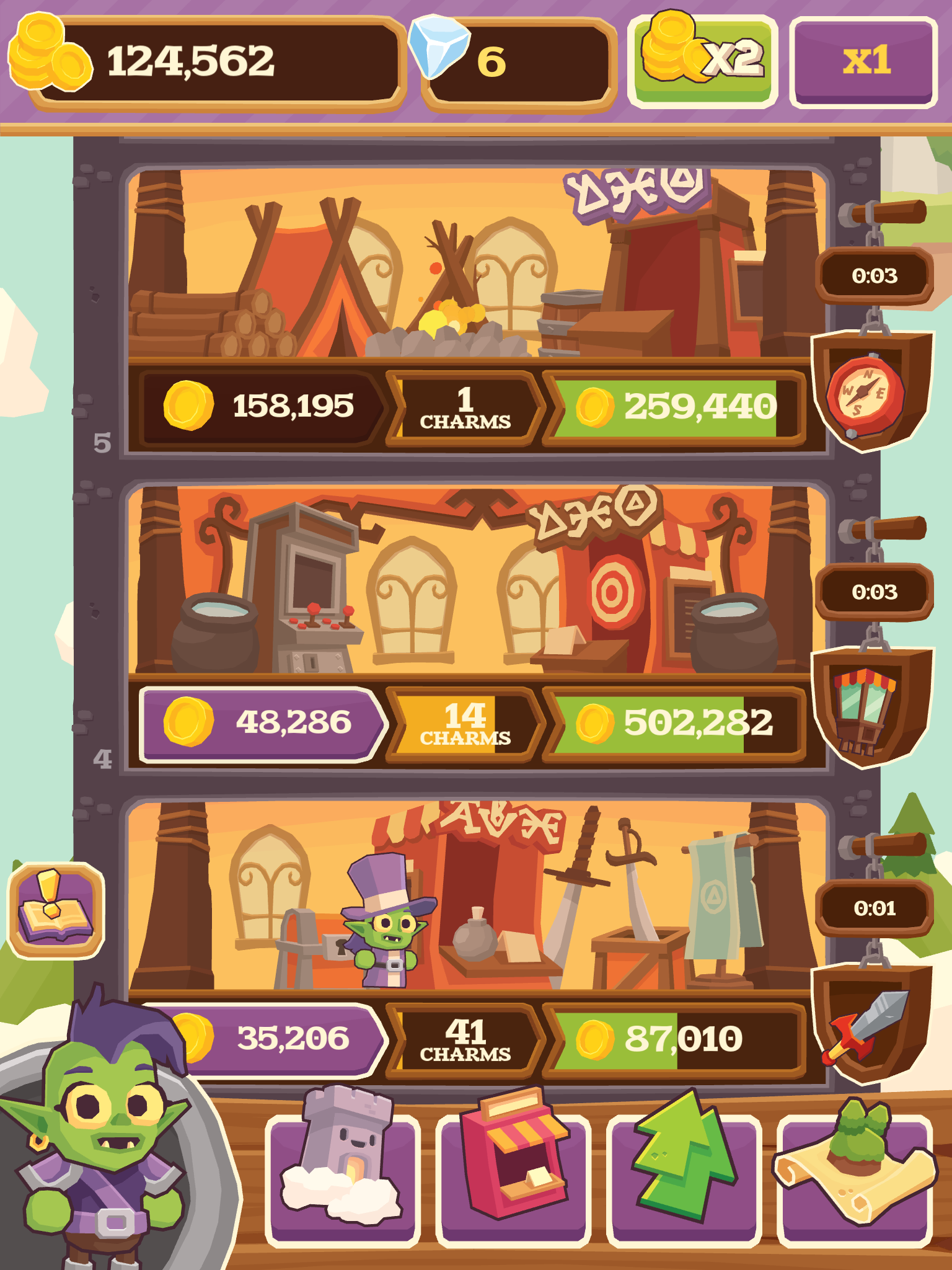 At the same time, if you need to step back for a minute and engage in the real world (as comparatively unsatisfying as it might seem), Charming Keep understands and will keep the meter running while you’re gone. While it won’t upgrade your shops for you (or collect funds if a charmer isn’t running them on your behalf), Charming Keep generously gives you a chance to double your earnings by watching an ad every time you jump back in.

If you’re looking for a real challenge, this isn’t it. The decisions aren’t that high stakes. Saving princes, while costly (seriously – it can cost quadrillions to save a life!), isn’t treated as a matter of urgency. But what Charming Keep lacks in difficulty, it makes up for in good old-fashioned fun. Further, although gameplay revolves around money, it’s progressive take on the fairy tale narrative means it’s the kind of empire-building game you’ll want to see the kids in your life playing.  At the very least they’ll learn some new math skills. More importantly, they’ll hopefully have a think about why the princes get all the glory when all along the princesses have the tools to save themselves.

Strange Telephone Review: What Even is This?