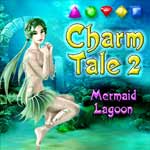 Charm Tale 2: Mermaid Lagoon doesn’t count as a sequel, having nothing in common with Charm Tale except that both tell a story. The puzzles, the themes, and the graphics quality also differ between the two. Kids would easily become frustrated with the original, but they can easily play and enjoy Charm Tale 2.

The original Charm Tale resembled Alawar’s Arctic Quest in that you had to fit pieces of different shapes into larger mosaics in order to free the Fairyland inhabitants while watching for special pieces of an ancient artefact in order to put it back together.

Charm Tale 2, on the other hand, is a simple gem-matching game where players must match at least three gems of the same color by dragging their mouse across them until a status bar reaches full capacity.

The story unfolds through the eyes of Dorothy (no relation to Kansas Dorothy), who travel to an enchanting world under the sea. Players will find themselves on a quest to find the daughter of the Sea King and learn a few things about Dorothy’s family. Though human, Dorothy has the ability to see and breathe in the water and learns why during her travels.

To help Dorothy meet each resident of Underwater Country, she must complete a series of gem-matching levels. In addition to simple color-matching, big gems also pop up on the board when eight or more gems are matched. Match the big gem with at least two other like-colored gems of any size to turn the big one into seven small ones. Clear and rainbow-colored gems offer more challenges. A clear gem can substitute for whatever color is needed. Rainbow gems let you match gems of two different colors, or they can behave like a clear gem.

Like other matching games, the more gems matched, the higher the bonus. For matches of six or more, players get a coin which they can pick up to add it to their collection. In between levels, players can buy power-ups (24 in all to choose from) with the coins, and sell artifacts they’ve found in chests that randomly appear on the board. Unfortunately the power-ups, which range from time enhancers to rotating gems, aren’t exciting. In fact, you don’t even need the power ups in relaxed mode.

Some characters send you to a secret grotto to seek hidden items to help in the quest. The first time you see the grotto, you need to find and light the lanterns. Next time you return, you’ll need to find objects of the same kind that could be fish, coins, swords, or something else.

While the hidden object mini-game offers much needed relief from gem matching, it makes things too easy by providing hints when you don’t want one yet. A hint button is available for getting hints, but the game insists on helping if you haven’t clicked on an object for a short time. It’s understandable the developers want to keep kids from getting frustrated, but the game isn’t targeted only to kids. Charm Tale 2 needs an on and off option for automatic hints. About 500 items are available for finding in the grotto.

As usual, players receive a choice of two game modes: Normal (timed) and Relax. That’s not a typo for "Relaxed" mode, signalling the language issues that lie ahead. Here’s another of many examples you’ll encounter: "Your mother longed to live in the air because he didn’t want to part ways with her friend. And so we took her to the Underwater Town where the healer lives. And the boy waited for her here, he couldn’t dive again," and "…your parents must have brought you to the Underwater Land before you grow up."

Despite the imperfect grammar, however, the story intrigues. While the matching part of the game can start to feel more like a chore than fun, the story is compelling enough to keep players slogging.

Charm Tale 2: Mermaid Lagoon deserves credit for the beautiful backdrops where Dorothy chats with the inhabitants of Underwater Country. The best part of the game comes from these scenes telling the tale. The music sounds is comfortably familiar – neither bothersome nor a classic. The text-only dialog could have benefitted from accompanying voice-overs.

Once finished with the story and hearing the tales of the Underwater Country’s 40 residents, there probably won’t be any desire to play the game again as the most important part – the story – is over. The story takes place in eight locations over 44 levels, which might be short for regular casual gamers but is right on target for the kids.

While the game play in Charm Tale 2: Mermaid Lagoon offers little in the way of innovation (and players expecting the same gameplay as Charm Tale will be disappointed), families might enjoy playing this one together on a cold or rainy day. It’s better than hearing the kids repeatedly whine "I’m bored," and the story provides a sneaky way to get them reading.