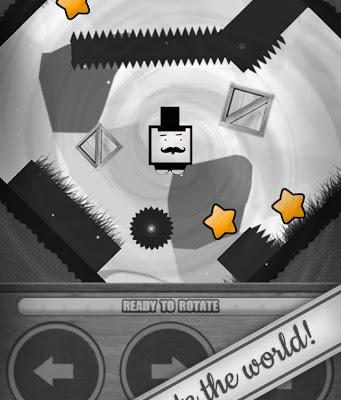 Prepare to doff your metaphorical hats, gentlemen and gentlewomen. Charlie Hop, the Chap-inspired action/puzzler from Madarina Games, is more than worth its weight in moustache wax.

Charlie Hop has a bit of a complex. He comes from a distinguished line of cavaliers, each of them blessed with a moustache more splendid than the last. Unfortunately, nature has chosen to bless poor Charlie with only a white-gloved slap across his comparatively barren face. But rather than suffering this genetic injustice in stride, he sets off on a Freudian journey across hill and dale, leaping across vast chasms, dodging a variety of pointy things, and shifting the very earth beneath his feet in order to collect precariously placed stars that will somehow, ultimately, grant him the ability to grow whiskers worthy of his ancestors’ pride. 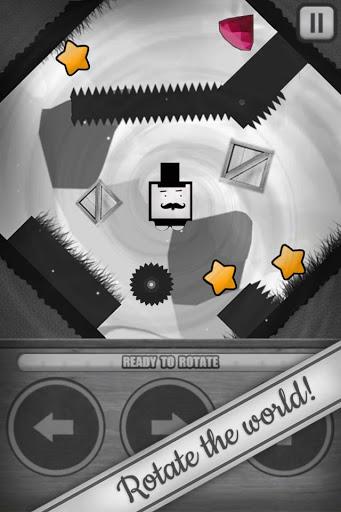 The gameplay system comes easy enough. Our cube-shaped protagonist Charlie Hop is controlled through three virtual buttons mounted on the bottom of your touch screen. You have a left arrow, a right arrow, and an up arrow, and they all do what you would think. In addition to that, you can also rotate the screen in 90 degree increments, which is essential to solving the various physics-based puzzles that each individual board is built on.

A typical level goes something like this: Charlie is standing on a platform suspended above the ground, and various hazards (from spikes to saw blades to deadly ray beams) litter the level around him. Three collectible stars are there for the taking, but in order to grab them without running into instant death, you must rotate the board by swiping the touch screen to the left or the right. The floor now becomes the wall, and the wall becomes the ceiling. This gives you an opening, and you leap for a star. You swipe again. The ceiling becomes the wall, and the wall becomes the floor. And you’ll often have to do this while Charlie is in mid hop, nudging him around obstacles with the arrow buttons as gravity takes hold. 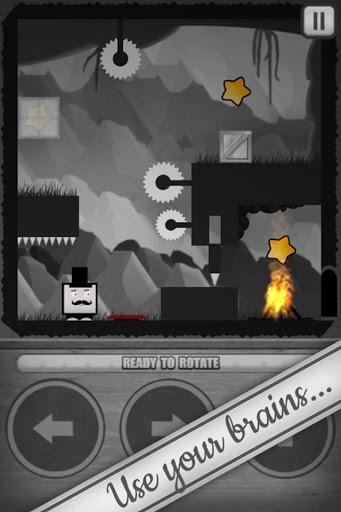 It takes a second to get used to, but it quickly becomes second nature. And to help ward off frustration, you’ll occasionally find crystals that allow you to completely skip a level when used. Once you collect your stars (which isn’t mandatory to clear a level, but it does give our little guy his raison d’etre), you head for the exit, and a new stage begins. And as you progress, you’ll pick up other useful skills, like setting Charlie’s top hat ablaze in order to melt blocks of ice blocking your way, or using wooden crates as barricades against swinging death traps. All of which makes for some interesting, fun, and occasionally devious puzzle designs.

Charlie Hop has a very cohesive art style. From Charlie’s top hat to his moustache in the making, our titular hero has a lot of character. The background graphics are stylized renditions of their stage names. Winter Winds has snowcapped mountains with flakes falling gently in the breeze. Cave Chaos is rocky and cavernous. Stardust City resembles an art deco metropolis. Everything is done in shades of grey, with only stars, crystals, and environmental hazards showing signs of color. The music is a bit lackadaisical – it’s just kind of there, and the tune doesn’t really change. A little variety would be nice; maybe a little bit of jazz to spice things up. The sound effects (particularly Charlie’s “hop”) are pretty dandy, though. 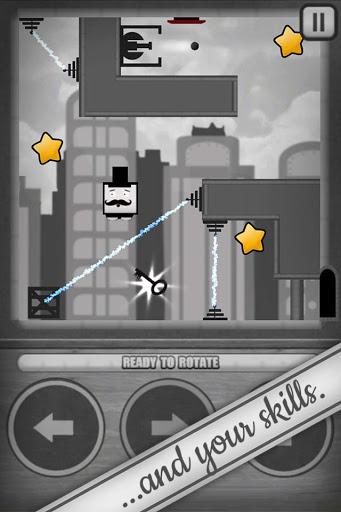 I did run into a few control issues while playing. There were several times when I felt my swipes didn’t register correctly. There’s a bit of a cool down period between swipes (in effect until your character’s feet hit the ground, allowing one swipe/rotation per leap and preventing you from perpetually floating your character by spinning the board in quick succession) but I don’t think that was the cause. Also, Charlie and other objects can occasionally get hung on a corner, but this seems like an unavoidable side effect of the square shapes and narrow passages interacting under the physics engine. These are rare occurrences, though, and certainly not deal breakers.

Charlie Hop is a great little fusion of platform and puzzle. And with 72 levels spread across three worlds (with three stars to collect per level), you’re going to be playing for a while before you run out of things to do. Some of the later levels will have you shouting a hearty “Huzzah!” once you work your way through them. So, yeah, give this one a shot. It’ll put hair on your face.

Calavera: Day of the Dead Review