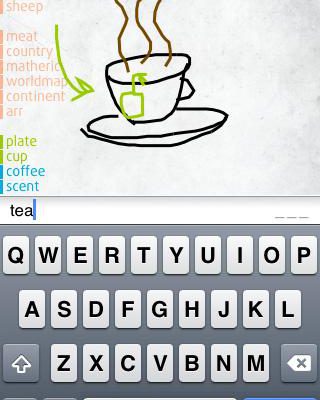 I’m not an art student. Despite my achieving adulthood some time ago, the best I can usually cobble together in the realm of drawing is a stick figure or a happy face that rivals the artistic endeavours of a 5 year old. Yet I’ve always found myself drawn to Pictionary. In the 80’s I was an avid Win, Lose or Draw fan. And today? Today I have Charadium.

Charadium is a multiplayer game for the iPhone that recreates that classic Pictionary experience for the modern age. Unlike Pictionary though this game moves at a lightning fast pace. Each session lasts 15 rounds, and each round typically lasts less than a minute. You’re going to have to think fast, type fast, and draw fast if you want a chance to win.

When you launch Charadium you’ll quickly be paired into a room with other players. Each of you takes turns drawing an image while the rest of you try to guess what that image is. Your guesses will be typed on the iPhone’s on-screen keyboard and posted into a scrolling chat that share the paper with the art – this way you can see everyone else’s failed guesses too. If someone guesses it right, both the artist and the guesser earn points. If no one guesses it, the artist loses points for their poor performance. The player with the most points after 15 rounds wins. 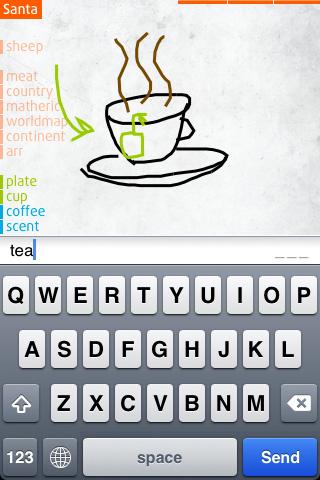 The assortment of words the game provides you often results in some impossible to draw concepts. Sure I can figure out what to draw when “explosion” or “cub” pop up, but how on earth do they expect you to draw “technician”? While there’s great variety in terms of word offerings (we experienced zero repeats – a miracle in a word-based game) it would have been nice if they had been a little more selective in the words used. Either that or allowed for an adjustable difficulty setting. Some gamers are going to love the challenge of figuring out how to draw “tragedy” or “statement,” but others such as myself are happy to stick with tangible concepts like “tent” and “anchor.” The game lets you skip words, but it also skips your turn to draw. And while I don’t want to draw “story,” I also don’t want to miss my turn with the paintbrush.

And then there’s the problem of what people draw. While it didn’t happen often, we did experience some troublemakers in the game drawing crude and adult images that had nothing to do with the clue provided. The game offers an abuse reporting system, but it requires three votes to kick someone out. Even then, it only kicks them from your session and not from the game itself. This means there’s no real penalty for jokesters who want to run around drawing inappropriate images and wreck everyone’s fun. It also means this is a game that’s hard to recommend for a younger demographic.

It seems like only yesterday that real time online multiplayer on the iPhone was little more than a fantasy, and yet here we are enjoying a game that is wholly dependent on it. Still, with every yin there’s a yang. In this case the fun of playing with others is tempered with the challenge of tolerating childish behaviour. Charadium is a great concept with a decent execution, but it’s hampered by the indecency of others. Then again, what else would you expect from a multiplayer drawing game? If you’re grown up enough to look past the occasional bathroom stall art major, there’s a good chance that Charadium will satisfy thePictionary fan inside.