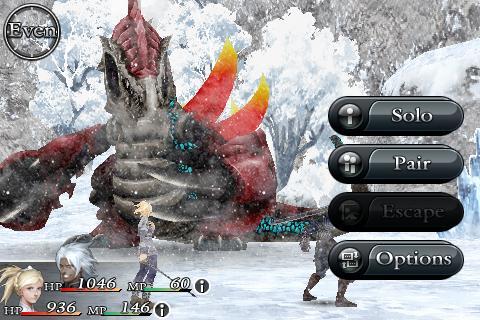 When it comes to role-playing games on the iPhone, titles tend to feature production values that mimic the era of the SNES and Sega Genesis. That said, it’s not surprising that Square-Enix is pushing the genre forward to the next level, given the company’s history with producing critically-praised and groundbreaking RPGs. The recently-released Chaos Rings proves that not only is the iPhone capable of delivering a modern Final Fantasy-like game experience, but it can do so beautifully.

Five different couples are abducted during a solar eclipse, waking up to a sinister monologue delivered by a nightmarish automaton only known as “The Agent.” According to The Agent, the couples are to battle in “The Ark Arena”, vying for the grand prize of immortality and eternal youth. When one couple rebels, it’s revealed that refusing to play the game is punishable by a swift death. In order to fight in the Arena players have to find one of two Chaos Rings. To tell any more would provide a number of spoilers, but the ensuing story is epic, touching, and rather dark in tone.

When you start the game, only two couples – Escher and Muisea, and Eluca and Zhamo – are playable, but the other two couples can be unlocked when you beat the game (which took me roughly nine hours the first time through). While each of these couples features lonely heroes with mysterious pasts, their back stories are gradually spun out in an exceptionally well-told fashion.

The game is essentially a dungeon crawl that occasionally features logic puzzles. Chaos Rings’ battle system is turn-based, feeling familiar to anyone who’s played a console-based JRPG before yet simple enough to work on the iPhone. It should also be noted that players have the option to turn off random encounters when traveling through the Ark Arena, which makes the game much more friendly for players who want to experience the story rather than spend their time level grinding.

During each turn, players can choose between having the two party characters fight individually or join forces for combined attacks. If you choose the latter, your attacks are far more powerful but the characters are far more susceptible to enemy attacks. When you defeat an opponent you can gain access to their genes (without spoiling anything, genes turn out to be rather important to the game’s story), and can equip up to three gene types at a time in order to gain specific advantages; examples of this include defense bonuses from hippopotamus genes, luck boosts from insect genes, and an increased chance of pre-emptive strikes from tiger genes.

Chaos Rings features the best and simplest interface I’ve ever seen in an iPhone game. You’ll use a virtual thumbstick to move around, but the stick shows up wherever your finger touches the screen, thereby making it much easier to navigate. Whenever you get close to an object or character that you can interact with an exclamation point appears on the screen that you can tap on to initiate an action. 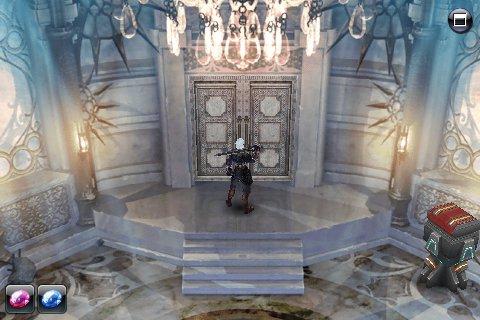 Square-Enix is known for putting out games that are pretty, but Chaos Rings is nothing short of stunning on the iPhone. Graphically I’d say this is equivalent to high-quality PlayStation game toward the end of the system’s development cycle. Think of games like Final Fantasy VIII or Vagrant Story and you’ll have a pretty good idea of how it looks.

Unsurprisingly the game’s music is excellent, too. If you’re playing this on an iPad it sounds great on the device’s speakers, but the iPhone doesn’t do the audio justice without the aid of headphones.

At $12.99, Chaos Rings is a weighty purchase for the iPhone, but Square-Enix has managed to provide enough content in this title to make it well worth the cost. This is a deep and engaging RPG that works beautifully on the iPhone because it was designed specifically for this platform. Square-Enix has already created some solid hits for Apple’s iPod family, but this is the company’s first real grand slam. Consider this a must-buy.