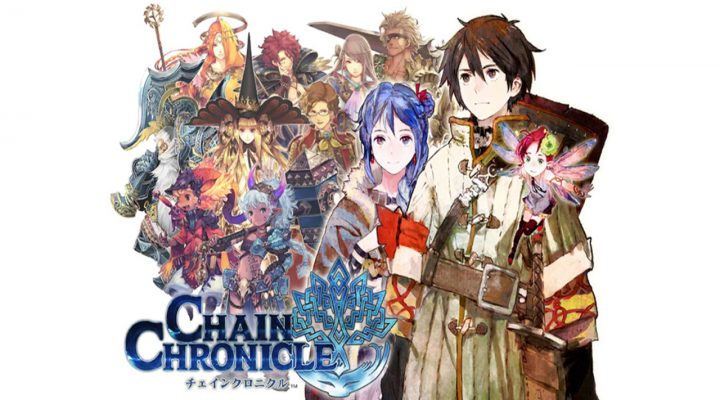 Lots of characters to unlock.

Extensive story, which is easily skippable for those who wish to do so.

My experience with Chain Chronicle is the first fruit of last summer’s SEGA Networks and Gumi Inc partnership. As a super popular mobile title in Japan, SEGA hoped that what Japanese players loved about Chain Chronicle would translate well for a wider, international audience.

After spending the weekend playing Chain Chronicle, I’d say that if Chain Chronicle represents the caliber of game that we can expect from SEGA and Gumi, we are in for some treats. Chain Chronicle is both extensive and fun, though a few issues litter the experience. 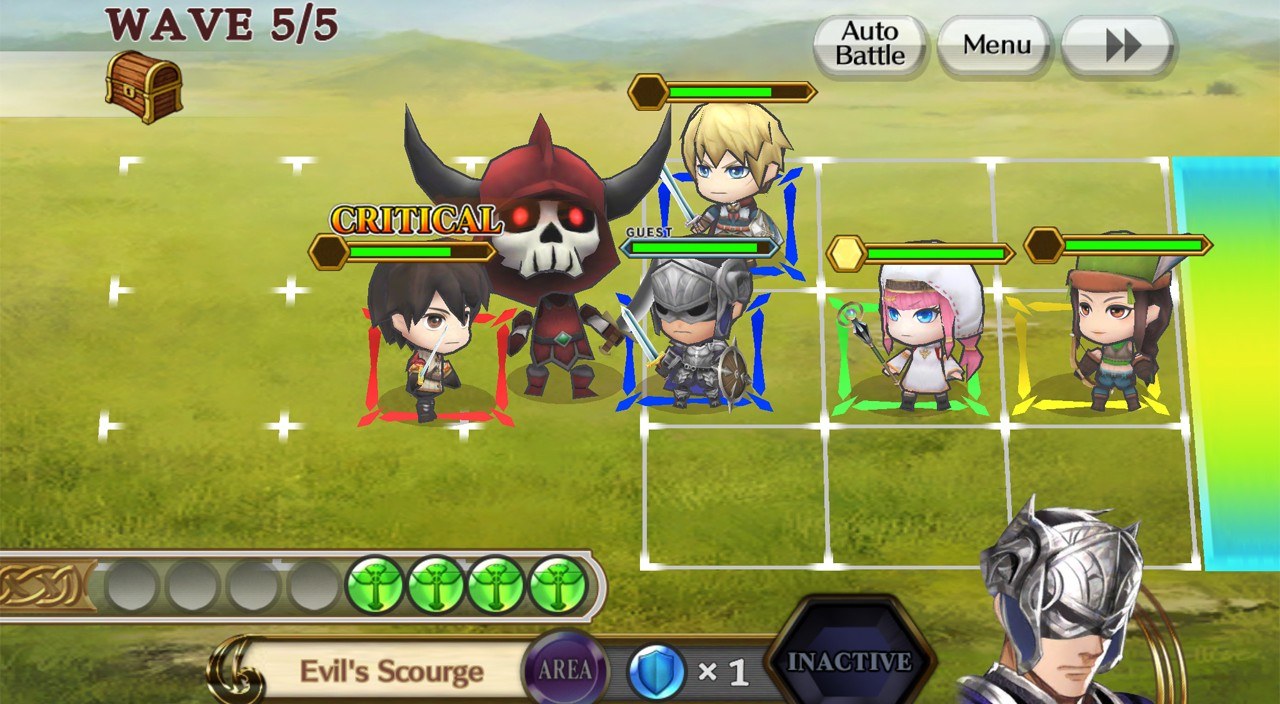 Chain Chronicle is part RPG, part collectable card game, and part tower-defense game. I know that doesn’t sound like the best combination, but trust me, Chain Chronicle pulls it off and you’ll wonder why you’ve never seen it in a game before now.

The standout mechanic of Chain Chronicle is the combat system. Veterans of Plants vs. Zombies will feel right at home as enemy units creep across the screen towards the opposite side. In the middle, players are positioned upon a gridded field. A total of four heroes can be out upon the battlefield at any point.

These heroes are broken into classes which include soldiers, knights, archers, wizards, and clerics. Each class has a particular usage, and their positioning should be carefully considered to maximize their efficiency. For example, putting an archer behind a knight (the tanky class) is a good idea because the archer can pick away at the enemies attempting to batter down the knight’s brawny HP meter.

At any time during combat players can reposition their heroes to any available open spot. During the heat of combat, reforming your front line feels like what I imagine it would feel like to switch a football play, mid-play. It’s a little hectic, but if done correctly it will greatly pay off…and it sure does feel great to watch a strategy composed on-the-fly, work out.

Chain Chronicle really makes the combat feel rewarding. Not only was I satisfied with my strategic abilities at the end of each battle, but I was literally rewarded with some generous loot. 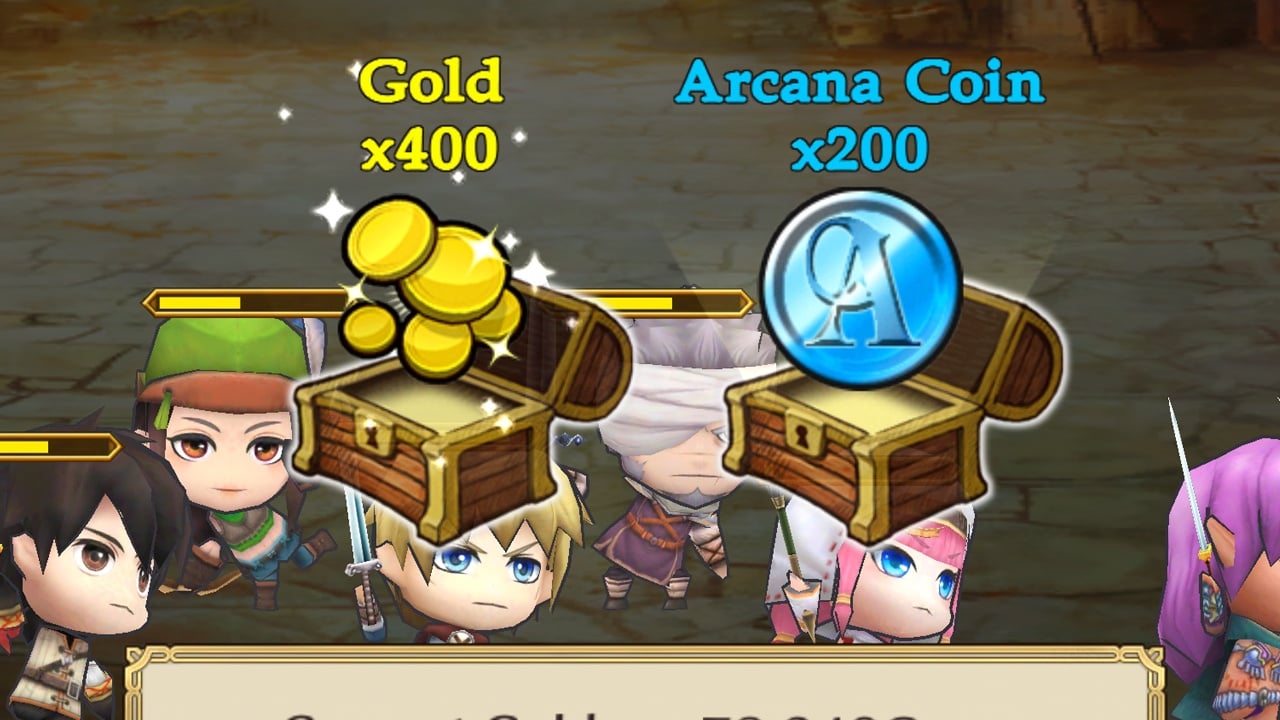 Typically the loot is in-game currency which is used to pay for upgrades, or pay for additional cards. If you are lucky, you’ll get a free card in your loot. Cards can be anything from a whole new hero, a weapons upgrader, a class upgrader, or a duplicate hero that can be used to enhance the existing hero.

The hero card art designs are where the game, for me, faltered first. Much like Gamevil’s recently launched Elune Saga, Chain Chronicle features anime-inspired art designs that, well…are not very realistic. As soon as I saw the art style that SEGA went with for Chain Chronicle, I knew it was only a matter of time before a female character was scandalously presented.

Sure enough, about thirty-minutes in, Princess Cleavage (not her real name, but you get the point) leapt out of a tavern crowd at me. It just got more ridiculous from there. There was even a nun character who might as well just be wearing body paint.

As someone who is all about games being accessible and inviting to everyone, the portrayal of women in Chain Chronicle is completely, and frustratingly, stuck in the past.

If you can ignore the card art (I won’t blame you if you can’t), you’ll see that luckily the majority of the actual gameplay utilizes 3D chibi-like avatars for the combat portions of the game. These combat avatars are absolutely adorable, and I constantly found myself thinking about how cool these heroes would be if they existed in blind-box retail packs. 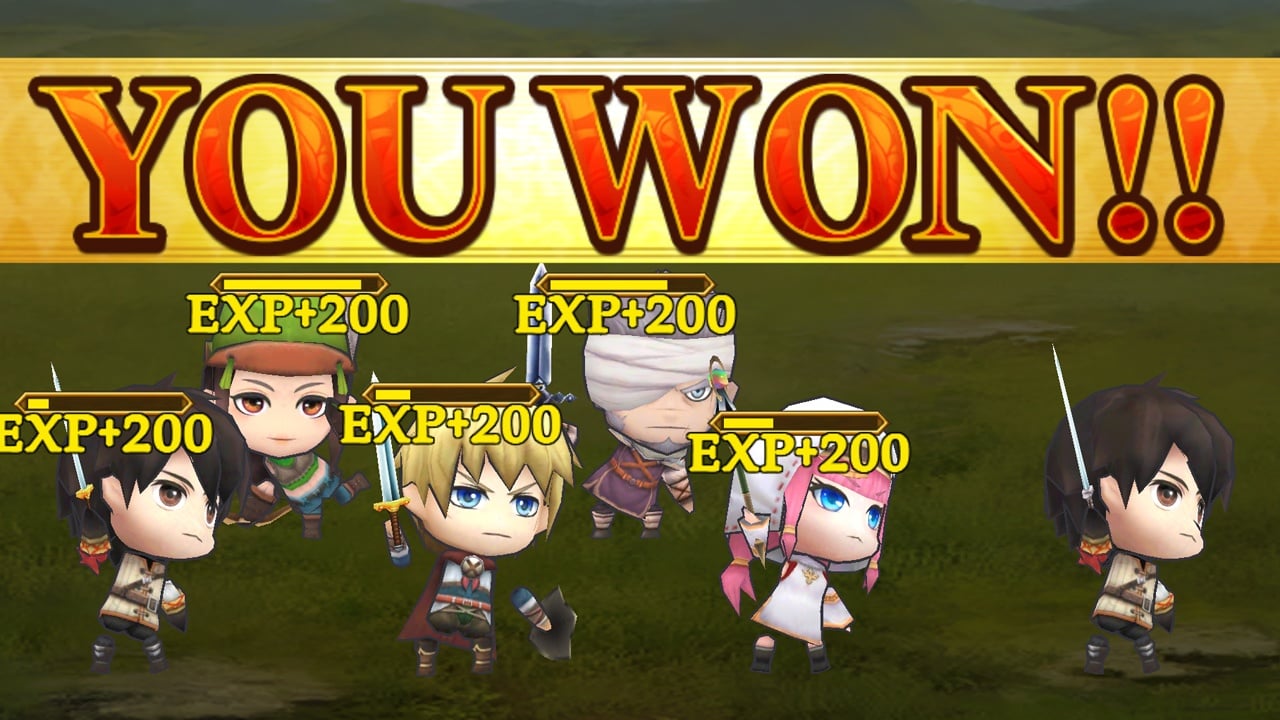 The story that Chain Chronicle has in store for players is impressively robust. This could either be a good thing or a sort-of bad thing for you, depending on your personal preference. If you’re looking for an RPG with lengthy character storylines and a multitude of interactive characters to befriend and party up with…Chain Chronicle is for you.

If you’re more like me and appreciate a good story, but not a few dozen pages of text at a time, a “skip” button is nearly always available to help hasten your return to combat.

I ended up skipping the story a few levels into the game. Chain Chronicles wasn’t presenting me with anything I haven’t seen already in a dozen fantasy games before; bad guys want to take over the world and you’re the one hero-boy to stop them and you assemble a team of heroes to help you anddddddfffffffff

Basically, the skip button is there, and after you complete the tutorial, I’d recommend just skipping the lengthy scripted scenes that break apart the levels.

Another reason to skip the story sequences is because you’re going to spend enough time away from gameplay, managing your party. And the menu system you’ll do this in isn’t very easy to use.

As your party grows, you’ll eventually have multiple parties full of different characters. When it comes time to upgrade those characters you’ll have to remember them by name (or picture) because the upgrade screen doesn’t show who is in which party. Nor does it make it easy for you to figure out who needs an upgrade more than the other characters. The menu simply lists all your available heroes out in an awkward horizontal list that you have to scroll through in order to pick a hero.

In the end, Chain Chronicle is a great game to get into. Even though it has a few blemishes, they don’t stop the gameplay from being fun and rewarding, and while the story didn’t necessarily appeal to me, I’m sure some of you will happily get lost in its depth.