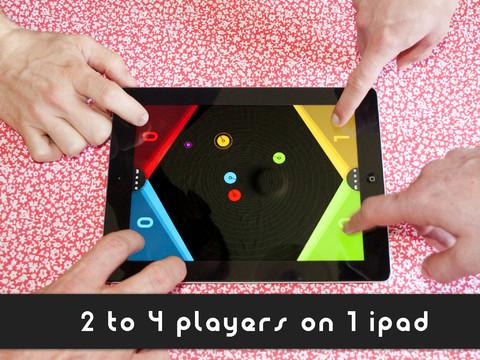 If a dance party and a mosh pit had a lovechild

Call me old-fashioned, but I miss real multiplayer experiences. The ones where adding a second or third player meant having people in the room instead of waiting for people to join your “room” online. And while it’s done wonders to get more people playing, one of my biggest gripes about casual gaming is that less people seem to be playing together. Enter Centrifeud: a great new excuse to yell at your friends and family.

From fledgling developer Secret Library, Centrifeud is a proper party game with a simple premise: guide your spinning disc around a bumper-filled arena to collect 13 tokens before your opponents can. (Bonus points to Secret Library for writing a hilarious, Hunger Games-style backstory in their app description, which had me wishing for an animated version of it in-game.)

Like all the best real-life social games, Centrifeud is extremely accessible. Tap and hold a corner of your choice to drop your disc into the game’s hexagonal arena. From there? Just press your coloured bumper to move in the direction your spinning needle is facing, resting to let it change direction. While I’m no great fan of hand-holding, the one thing I’d suggest in retrospect is for Secret Library to “tutorialize” the first game by default, removing all confusion about how to get around and what to do – especially for younger players.

With that said, the design here is top-notch. By using the “control pads” as boundaries for the arena, Centrifeud elegantly uses all available screen real estate, while creating a shape that opens tons of opportunities for frenzied bouncing. Even cleverer, by making you start and stop your disc to let the needle change direction, the game has players unintentionally knocking each other off course all the time. Very much like Jetpack Joyride, the genius in Centrifeud is how much went on behind the scenes to make everything feel completely effortless. With just one touch, you’ll find yourself causing and navigating lots of chaos like a pro.

Adding to the fray are the game’s coyly named “Touch Yourself” power-ups, which spontaneously appear at the center of the screen. When they do, the first player to tap their disc benefits from a short-but-sweet change to the way things are done. In some cases this means you’ll go double the speed, but more often than not you’ll impair your opponents hilariously, locking up their movement or removing their directional control. My personal favourite is the “tipsy” icon, which has everyone but you coming down with a case of erratic, leap-frog-style bounces. While at first they might seem unfair, the game’s field bonuses never give too big a leg up, and add ample laugh factor with the meta-competition they create.

Worth mentioning as icing on the cake is Centrifeud‘s vibrancy. Booting up a game feels exciting, as concentric circles act as a timer, edging toward the center of the screen. Power-up time limits are just as intuitive, leaving your opponents ready to pounce while they watch circles of your disc’s color inch to the middle of field. Meanwhile, the laser-bass soundtrack by Octophonix feels like a mix between dance beats and catchy commercial jingles.

Occasionally the game’s simplicity shoots it in the foot, as two-player matches become boring quickly and beg for the inclusion of more people. Moreover, with everything understood and mastered in a matter of minutes, I would have loved to see a couple more modes: perhaps one where you fight to knock each other off an edgeless arena, with a whole new set of power-ups?

All told, however, Centrifeud gets does a great job of encouraging you to rediscover the fun of really playing together and using games as centrepieces for socializing. It’s one among a short list of great communal experiences available right now on the iPad – a list which I only hope will grow. With a tiny price tag and a neon glow practically built for parties, you’d be silly not to have Centrifeud sitting on the table when friends – or enemies – come knocking.