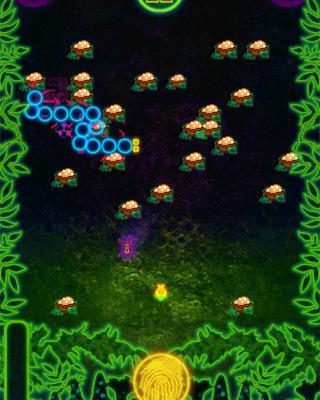 If you were a little saddened last summer by our article about Atari’s iOS catalogue mysteriously vanishing overnight, fear not! Brandishing new names, a few of these re-imagined arcade classics have returned to the App Store – kind of.

Like the original Centipede, Centipede Ultra puts players in control of a ship that’s trying to blast the titular bug to smithereens as it makes its way through a field of mushrooms. Whenever a player shoots a segment of the centipede, the bug splits into two and the now defunct chunk of body turns into a mushroom. Other bugs, like spiders and fleas, will get in the way and try to impede your progress.

Players control their ship by simply sliding their finger along the bottom of the screen. In a nice twist, Atari has provided a border around the game so that your finger merely covers the border and not the actual action as is the case with so many iPhone games. 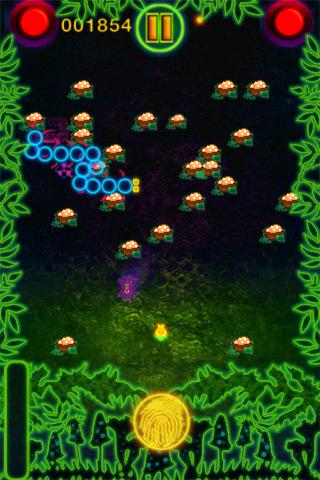 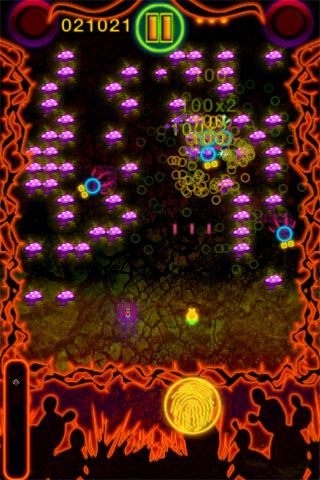 While the overall experience is more or less identical to the Centipede arcade cabinets of days gone by, Atari has managed to make a few tweaks to the formula – all of them for the better. The most noticeable of these is cosmetic, with a funky neon vibe replacing the once blocky pixels of the past. The music has been kicked up a notch too. While the original cabinet featured nothing more than the steady thump of the centipede’s feet, Ultra offers a great electronic score that feels like Paul Oakenfold fell into a time machine and wrote the score for a seedy 80’s flick. That might be a tough one to wrap your mind around, but trust me – when you hear it, there’s simply no better description for the music.

In addition to the visual and audio tweaks, Centipede Ultra also adds power-ups into the mix. By shooting these power-ups, players will be able to obtain temporary upgrades like rapid fire, multi-shot, and a clock that slows down time. There’s even a DDT bomb that’ll wipe all the enemies off the screen instantly.

In terms of difficulty, I found Centipede Ultra to be far more forgiving than its arcade inspiration. While the original Centipede offered a tough as nails challenge that would easily retire my efforts within a few minutes, a session of Centipede Ultra could easily last 10 minutes or more. With plenty of extra lives handed out at regular intervals and a slower than classic threat, Ultra‘s default difficulty seems to cater more to the timid gamer than the arcade champions of old. Thankfully the difficulty does start to ramp up the longer you play, and you can always up the challenge from the get go changing the setting in the Options menu.

Contrary to what players who missed out on Atari’s earlier release might be expecting, Centipede Ultra is actually just one of three modes that was previously found in Atari’s original iOS release of Centipede. The others, “arcade” and “classic,” which provided experiences that more closely approximated the original arcade experience, have been seemingly left on Atari’s cutting room floor. 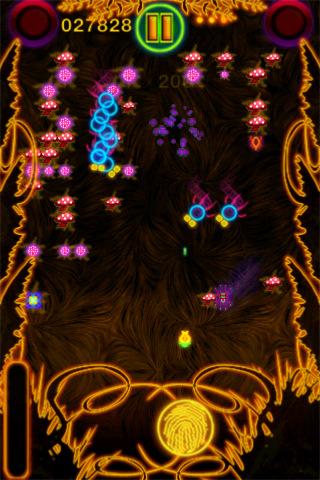 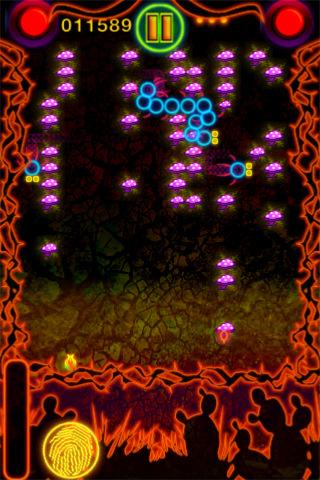 Our biggest gripe about Centipede Ultra isn’t about what it is – it’s about what it’s not. In the nearly 3 years since the game’s original release, everything from Facebook Connect to Game Center has popped up to allow players to see how their scores size up against those of their friends and the rest of the world. Centipede Ultra offers none of that. Classic Atari experiences like this have always been about achieving a high score, so the fact that Ultra gives you no avenues to compare yourself to the outside world – in 2011 no less – is simply an embarrassment. I can forgive Atari for pulling their games from the App Store last year, but to bring them back with nary an improvement? That’s a tough pill to swallow.

Still – while Centipede Ultra may offer an experience that’s only a fraction of Atari’s inexplicably defunct 2008 Centipede release for the iPhone, it’s also a game that gives us little reason to complain. We would have liked to have seen some changes that would have reflected the improved opportunities for iPhone games in 2011, but in the grand scheme of things, these complaints do little to affect the overall gameplay.

It may not be the same earth-shattering series overhaul that we’ve seen in games like Pac-Man: Championship Edition and Space Invaders Infinity Gene, but Centipede Ultra manages to hit that sweet spot between nostalgia and new content that should appeal to any fan of the original.