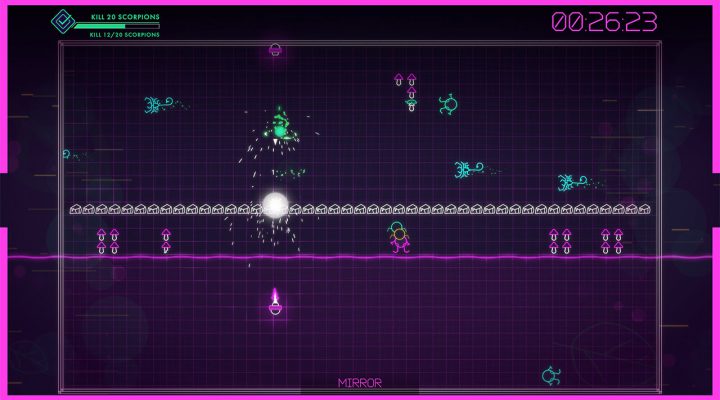 Centipede: Recharged isn’t particularly complex. From the description it even sounds like a slightly lazy take on the arcade classic from 1981, with little to recommend it.

In reality we found it to be a well balanced and hugely compelling shooter, and one that truly excels when played with a friend.

A 2D shmup where you are limited to only roaming around the entire bottom half (okay, two fifths if you’re a pedant) of the screen, your only job is to survive and rack up as high a score as you can.

You do this by blasting at the titular centipedes, which march down the screen and are made up of multiple segments. Once shot they split up into smaller centipedes, but their shot sections also turn into mushrooms – which clog the screen.

These can be blasted away, but focusing on these centipedes can often scuttle their way ever closer to the bottom of the screen – where they can become a real issue.

Other enemies include fleas which divebomb down and leave mushrooms unless shot, scorpions which dash vertically across the screen but are worth several points, and spiders – which exclusively turn up in the bottom section of the screen, but once killed give you a random power-up.

And it’s the power-ups where Centipede: Recharged really takes flight. Like a butterfly…or something.

There’s a great range of weapons from rapid fire, bomb projectiles, and a laser which clears everything in its path. Not one power up is useless, and they’re all essential to master if you’re to rack up a massive score – all of which are recorded on local and global leaderboards.

That really all there is to Centipede: Recharged in terms of gameplay then, but a lot of work has clearly gone into making sure it’s perfectly balanced.

It’s even more fun in the local co-operative mode, where the action gets frantic quickly – and there’s a power-up you can grab to revive your buddy if they die, making sure nobody is left watching on the sidelines for long.

The main high-score option is also complemented by a short Challenge mode – a series of thirty stages where specific objectives have to be completed. They’re a welcome addition, with each having their own leaderboard.

We can’t find much to fault with Centipede: Recharged really, beyond a lack of online co-op. It has satisfying weapons, an enjoyable gameplay loop, and excellent presentation.

The budget price-point means this is a very easy recommendation for those looking for a new shooter, or even a well balanced co-operative experience. In our eyes Centipede: Recharged is one of the best retro reboots so far this year.