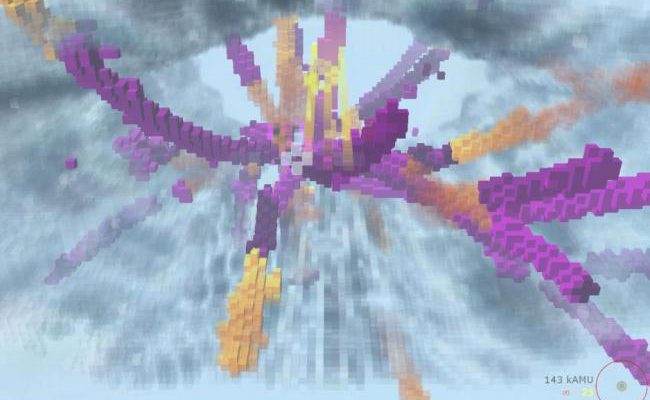 We like to think that if any nasty germs gain access to our insides, our helpful antibodies will simply kill them all off and we won’t even notice. Perhaps we’ll get a bit of a sniffle, but that’s it. Of course, then you get all the various movies and books and the like that envision the story of a virus that our bodies simply cannot cope with, and it ends up going on a rampage through the human race, cutting the world population down to size.

Whether or not this is actually possible (what do you think I am, a doctor?) it’s certainly a scenario that makes for great entertainment. Cell: emergence brings this very idea to the table, with one twist – you have the cure, and your job is to get it administered and wipe out the disease through voxel-visuals and shooter-style gameplay.

The story behind Cell: emergence revolves around bio warfare and smart germs. You control a nanobot that has been injected into a little girl’s body, ready to track down the germs and eliminate them. Unfortunately, they keep expanding at a ridiculous rate, and keeping them at bay is easier said than done.

The story is one of the main pulling points of the game, as you’re never quite sure exactly what’s going on. Every now and again, the action pulls out to show what’s happening to the girl in comic-book form with full voice-acting, but it only ever gives you little tidbits of information. Playing through the whole game and finding out what’s going on is exciting stuff.

Gameplay-wise, we’re talking about a shooter with a very odd perspective. The camera is sort of above and to the left or right, and when you move your nanobot around, the screen will slightly shift to keep you on the screen. It results in you having to experiment with shooting to hit the right spot. This might sound tricky, but actually it’s very effective and a nice break from regular shooters. 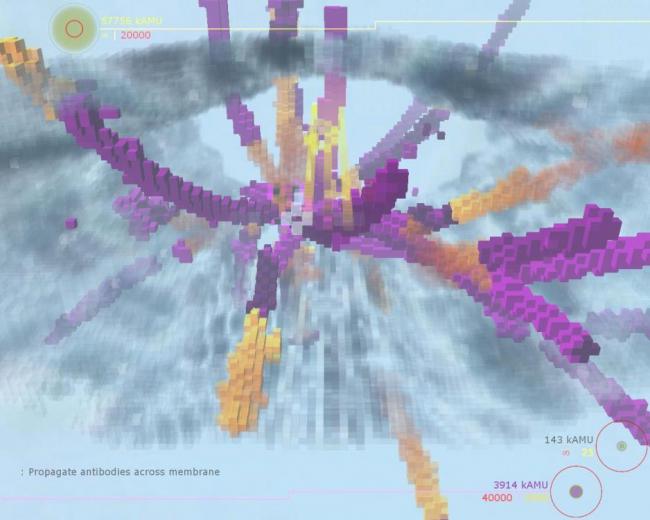 As diseases spread, you have to shoot them down and build “bridges” to keep the disease at bay. Pressing the arrow keys lets you flip around the various membranes and body parts, and keeping a lid on the viral spread can be really challenging.

Cell: emergence has a really lovely feel to it, thanks to dynamic voxels that spread around the screen as they see fit, and explode into gorgeous, blocky death as you show them your guns. The game uses sound is a really clever way too, as the music moves along to the speed of the girl’s heartbeat, and the heartbeat can be heard between levels too.

Some players, however, may find Cell: emergence rather confusing. While the game divulges its story slowly throughout play, it also doesn’t really explain what you’re doing, and you’re left to guess a lot of the time, especially when new powers arise. On a number of levels, we found ourselves completely oblivious as to what we were meant to be doing.

Finally, the game also becomes quite repetitive towards the end. New elements are added frequently to keep the action flowing, but inevitably there’s only so much you can add to a shooter to keep it fresh. Still, Cell: emergence is definitely one of the better shooters we’ve played in recent times, and you’d do well to grab the demo and see what you think.